Can anyone provide the datasheet for Qualcomm MDM9207 and MDM9240?

Qualcomm maybe? Usually only to customers under NDA, I believe...

Those are LTE chipsets. How are they relevant to OpenWrt anyway? Do you have a modem with one of these? It should work fine with existing drivers in OpenWrt. Either qmi_wwan or cdc_mbiim. if not, then we can fix that without the datasheet.

EDIT: I realized afterwards that the idea might be to run OpenWrt on those SoCs, which have an ARMv7 application core in addition to the modem core(s) and lots of interesting peripheral IPs. Bringing up OpenWrt on this should be possible in theory, but would be a lot of work. Probably more than any currently supported SoC if you are going to include the modem features... But the OpenWrt project has achieved impressive goals in the past, so I am not going to reject the idea if any developers are interested. I beleive you would need much more than a datasheet to start it, though. At least some vendor SDK or similar.

It is possible. But there are many blobs and android kernel in qcom SDK for these SOCs. I have such device: 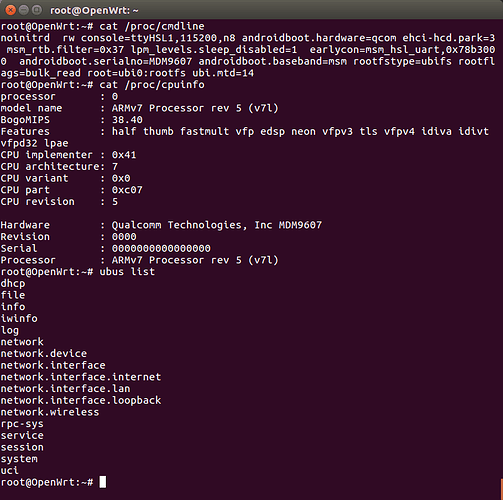 Just FYI: the Alcatel MW40 modems have this kind of chip, and some firmwares run an unprotected adb shell (as root) listening on the LAN address (default adb port) which can be used to fully access the device. Would love to help and see this fly!

@iuncuim, is MDM9x07 now directly supported in OpenWRT (running on the single 'application' core of the modem)? i'm guessing it isn't since it's probably vendor-specific, even device-specific, and also dependent on a vendor's SDK. Just curious, how difficult was it to get yours running?