Linksys WRT3200ACM only transmits with 20 MHz on the AC radio

I've set my AC radio on the WRT3200ACM as everything automatic, except for the channel which is 80 hz. However, it looks like it only transmits in 20 Hz. Images attached. 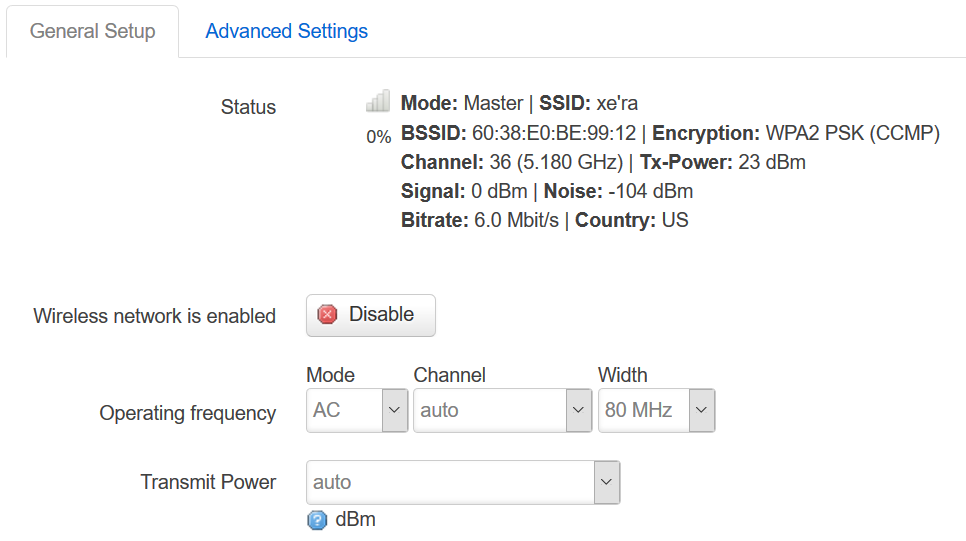 I just noticed that the automatic channels my router is selecting, are all 20 hz spec... I can't choose proper 80 Hz spec routers (as found here). My router only shows me channels that are two numbers off, i.e. 44 instead of 42.

What's wrong my my router settings?

If you see something similar, this means are other devices on the channels. The regulatory setting does not permit interference (and devices must automatically be configured to ensure against it). LEDE simply follows the standard.

Lastly, from the same Wikipedia page:

In 2007, the FCC (United States) began requiring that devices operating on 5.250–5.350 GHz and 5.470–5.725 GHz must employ dynamic frequency selection (DFS) and transmit power control (TPC) capabilities. This is to avoid interference with weather-radar and military applications. In 2010, the FCC further clarified the use of channels in the 5.470–5.725 GHz band to avoid interference with TDWR weather radar systems.

There was extensive discussion on this thread about why wider bandwidth doesn't work on congested channels.

(I should note, if you look at your spectrum with an app like a wifi analyzer, you may see networks using 40 and 80 MHz..it's likely their product breaks the standard...and causes other issues on the band near your devices...why break a standard? Because the manufacturer promised 300+ Mbps WiFi on the box, of course.)

Channel "auto" is just an alias for the lowest channel in the list, 36, and channel 36 is a 20 MHz channel. Try setting channel 42, which is the center of the 80 MHz wide lower band.

Wireless local area network channels using IEEE 802.11 protocols are sold mostly under the trademark WiFi. The 802.11 workgroup has documented use in five distinct frequency ranges: 2.4 GHz, 3.6 GHz, 4.9 GHz, 5 GHz, and 5.9 GHz bands. Each range is divided into a multitude of channels. Countries apply their own regulations to the allowable channels, allowed users and maximum power levels within these frequency ranges. Fourteen channels are designated in the 2.4 GHz range, spaced 5 MHz apart fr...

I can't select channel 42, even though my country is listed as US. 44 is there. My available wifi channels are all off by 2; any idea why this would be the case?

I can’t select channel 42, even though my country is listed as US. 44 is there. My available wifi channels are all off by 2; any idea why this would be the case?

I think there's a misunderstanding on how bands/frequencies are considered in relation to what's called the "center" and "edge." Nonetheless, from the Wikipedia diagram you presented yourself, channel 42 (or Channel 36+40+44+48) touches 5.250...therefore, it's covered if running in 80 MHz mode (which is the bandwidth of the channel in question).

With that said, you also need to understand that...by selecting 36, you are selecting 42.

I think the image under Older Software and SOHO Routers on this page will help provide more clarity:

Gotcha. Once I get home, I'll try this out, and also check on my laptop/PC what wifi channel is advertised.

This means that my laptop/PC should see the wifi channel as 42, and not 36, right?

As the power table cannot be overridden, you probably want to follow the readme and not set a country code.
I use:

fairly consistently.
The issue with country code is actually a conflict with the third radio, so this may not be what you are running into, but a place to start.

This means that my laptop/PC should see the wifi channel as 42, and not 36, right?

I couldn't tell you what your software would show, but I surmise IF YOUR LEDE FINDS A CLEAR 40 OR 80 MHz channel, these are all possible (and refer to the same 80 MHz channel you call 42):

I'm losing my mind. I've just tested every single channel on AC mode, and all I get is 20 Hz (picture below showing my three devices). I see others posting similar output at 80 Hz, so I can't be reading this wrong. 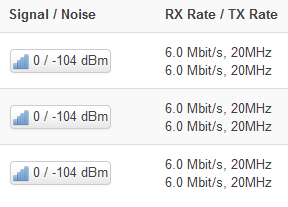 What is going on here?

I am also not seeing any message about "operation not permitted" for those bandwidths, in the Status -> System Log or Kernel Log.

EDIT: Mind is no longer lost! (I think)
I used the WifiInfoView tool, and saw that my wifi channels are set exactly as I expected them. So it looks like there is a bug in Lede, where the Associated Stations info is incorrect, at least for my router model.

I think this is because you insist you can set the router to a 80 MHz channel or get your device to switch to 80 MHz despite DFS being enabled.

As the power table cannot be overridden, you probably want to follow the readme and not set a country code.

You can do as anomeome suggested; but this is actually illegal if you're in FCC-territory and it switches to 80 MHz with other access points around...you're also causing interference.

Since you insist there's something wrong, I guess there's no way to help or convince you. It's somewhat obvious we're missing something between each other in translation, as you're showing an image of your Associated Stations. And for the record, your signal seems horrible, even on 20 MHz, as you're getting 6 Mbps.

Best wishes obtaining 80 MHz. Perhaps you should verify in an open field with no other WiFi access points.

devices operating on 5.250–5.350 GHz and 5.470–5.725 GHz must employ dynamic frequency selection (DFS) and transmit power control (TPC) capabilities. This is to avoid interference

You simply cannot SELECT 80 MHz channels. Your device has to find the four 20 MHz channels available, then it will become an 80 MHz channel. Please use an app like WiFi Analyzer for Android to show the wireless spectrum in your area.

Before I continue, I want to say that I am not going to do what anomeome suggested, for obvious reasons.

I edited the post last night. Like I said, wifi analyser tools are showing me "correct" speeds. Also, the speeds that Windows 10 shows in the wifi properties, show speeds around 800+ Mbps. So, like I said, the "Associated Stations" section seems to be wrong when it shows 6 Mbps.

Thanks to the info here, I understand what makes a 80 Mhz channel now (4x20 Mhz channels), but again, that does not explain the incorrect speed indicators in the LuCI web view. Especially when users like anomeome show screenshots of faster speeds, which are near identical to what I'm getting in the real world.

Especially when users like anomeome show screenshots of faster speeds, which are near identical to what I’m getting in the real world.

Aaah, I understand now....I need a G or N device to test what you report, I'll do that later and update.

Also be advised that the channel speed can change dynamically. Were you looking at the Associated Stations list while you were doing activities, such as a speed test?

Certainly seems to be something lost in translation, or someone is not paying attention, perhaps you did not read the readme linked(by the author(marvell employee) of the mwlwifi driver). As regards this particular device, I most assuredly did not state doing anything illegal, in fact, given that the FCC power table is embedded in the device, and cannot be overridden by loading an incorrect DTS, you cannot really infringe on locale specific regulations. But don't let facts get in the way of FUD. Perhaps read what I wrote, that by entering a country code you may possibly create a conflict between the two different radio device drivers, and it is NOT recommended to enter a country code for the mwlwifi driver.

Were you looking at the Associated Stations list while you were doing activities, such as a speed test?

Good question, I actually had that screen on a second monitor, and watched it during speed tests, Steam downloads, and nothing at all. It did not move from 6 Mbps. Once I get home, I'll try doing a "iw wlan1 station dump" command in SSH, (I think I have that command right), and see what speeds, etc., show up there.

I must have misunderstood: "Under this case, country code setting will be conflicted and it will let DFS can't work" from your readme. Nontheless, I was referring to sinayion. Apologies for the confusion.

I'll show my results from a an N device later as well.

I know we discussed this in the other thread, however I believe that the BSS coexistence rules for channel width only apply in the 2.4ghz spectrum.
I’ve not seen it specified for 5ghz anywhere.
I can’t test it either as I don’t have enough 5ghz neighbours, and I’m happily transmitting at 160mhz width.

Please someone correct me if I’m off the mark here.

imo, that is correct

I connected a device to my 802.11an access point and saw the following on my Associated Stations list during a speed test:

When Idle I received:

Cheers, @lleachii, for the info. I'll try running my tests again, with LuCI up on my laptop, and doing stuff on the desktop.

I was testing the speeds/latency last night with League of Legends, and everything was fine; so at least that part of my life is happy! xD