Does the WAN being marked red indicate I have it configured incorrectly?
I have a WRT1900AC behind a 2wire DSL modem. The LAN is set up statically and the WAN is using DHCP
One of my NAS devices on the LAN side says it cannot get an external IP? 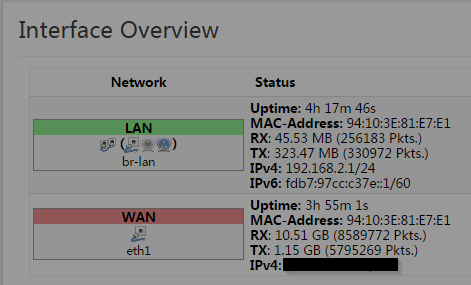 Does the WAN being marked red indicate I have it configured incorrectly?

No, it is the default for WAN.

One of my NAS devices on the LAN side says it cannot get an external IP?

Do you have access to your NAS on your local network? My guess is that it has to do with making your NAS visible on the Internet and maybe you need to open incoming ports on the router for this NAS, or configure upnp.

Does the WAN being marked red indicate I have it configured incorrectly?

Different colors indicate different firewall groups. Default is green for LAN and red for WAN. There's default behavior for INPUTing and FORWARDing traffic and creating distinct firewall rules usually means picking a certain firewall group als source and/or target and allow or deny anything. Like "from LAN is allowed, from WAN is for bidden, except from WAN to LAN in case protocol type is ICMP, then this is allowed, too".
As for the default situation, you have an interface called LAN and a firewall group called LAN. And you have an interface called WAN and a firewall group called WAN.

You could, for example, have three interfaces LAN1, LAN2 and LAN3 for three room mates of dorm apartments. Every interface could belong to the very same firewall zone LAN (since all firewall rules apply to them equally), but they can be different interfaces with individual IP ranges and so on. In this situation, all three LAN1-LAN3 interfaces would be green.

If you create additional firewall zones they get different colors. I currently run 10 interfaces in 6 different firewall groups.

My point being: Color doesn't indicate any kind of quality, it's just a distinction between different firewall groups.

Do you have access to your NAS on your local network? My guess is that it has to do with making your NAS visible on the Internet and maybe you need to open incoming ports on the router for this NAS, or configure upnp.

That would be exactly my guess, too.

Is this an actual problem for you? Is something not working as expected? Maybe you can just leave it as is. If you don't need your NAS device to be reachable from the WAN side there's just nothing to do.

Do you run a couple of identical NAS devices? I'm just asking because you wrote "one of my NAS devices". Chances are they fight for the very same port forwarding rule.

@golialive Hi! it is a very interesting configuration that you have there, I am trying to do something similar, mainly the vpn (Yellow) and Orange configuration... can you post your config files?, will be really useful to learn how to do it, thanks!

Thank you all for your replies! Very helpful. Thanks to "golialive" for the information about the different colors as they relate to the different firewall groups. Regarding the NAS not being able to get an external IP, this turned out to be an issue with the firmware (bug?) on an Iomega StorCenter ix2-200. Not a huge deal though as I am able to access it remotely by setting up port forwarding through LEDE/router... Great help everyone!

will be really useful to learn how to do it

I'm sorry to say that @golialive came to a bit of a wrong conclusion, especially "All green zones can reach (nearly) every other zone" and similar assumptions about the meaning of a "green zone", or other zone colors.

It's really much, much simpler than that. The single factor that defines the color of a firewall zone is its name.

There are two hardcoded colors; green for "lan", red for "wan". The color for any other zone is generated from its name.

The initial decision to use red and green for the most basic firewall zones is, in my opinion, a bit unfortunate. Red and green, without any further explanation, can easily be misinterpreted as a status indicator, as the OP proves. It would have been better to choose other defaults and make sure that pure red and pure green won't be generated from the PRNG-based code.

My whole post, especially when talking about different LAN interfaces, was about the distinction between interface and firewall group, where both are named "LAN" by default (and thus are displayed green), but the assigned interface to a certain firewall group can have a completely different naming as well.

I didn't want to explain what colors do in default setups, since that's not possible at all. I just wanted to give my current setup as an example of what can be done, and as part of that, "all green zones can reach reach (nearly) every toher zone" was meant purely as a descripton of how I configured this.

So sorry for not making that clear enough.

@golialive LOL! I already knew about color thing, I just talk about the configuration of your networks, I want to have on my current router the same as you, a network just for vpn, a network just for guest, a network for IOT... I already managed to get working OpenVPN, and a guest network, but I don't know yet how to isolate OpenVPN in other network and those thing you already done. It is possible you publish your config files? it will be really helpful, thanks in advance!

Hi! can you share your config files ? it is a really interesting configuration. thanks!

Sorry for not having replied earlier, I was quite busy during the last couple of days.

To be honest, there's really not much interesting to my setting.

I won't post the actual config of my TP-Links, but here's the shell script that sets wifi up:

To be honest, there's really not much interesting to my setting.

I consider myselft a very experienced OpenWRT / LEDE user but I actually had problems with Firewall / Networks / Route Tables, I configure some times networks but I fail in complex configurations... I will see your files in detail and try to learn how you achieve it, Thanks!