Why, when I set up the following routes:

Edit: ip route show only shows the main table, but the route to 192.168.8.1 is added in table 2. You can show all routes with the command ip route show table all. (Or specify table 2.)

Because you didn't specify the gateway.

Do not create any static routes.
Assign each interface to a separate routing table.
Add custom routing rules with a priority of 15000 or 30000.
The priority depends on which built-in rules you want to override.

Ah, I think I see. Nice. So for each interface, create table with default route to that device, and then just create the set of rules to move the packets around on their merry way? Is that what you mean? I can see how this might simplify things as compared to rules with many different forms of routes.

Would you recommend creating tables with names or just use numbers? I could create table name to match that of interface? Maybe that would make things easier for myself?

Yep, there's a script that configures PBR exactly like that:
https://openwrt.org/docs/guide-user/network/routing/pbr_netifd
And it supports both IPv4 and IPv6.

I have tried to route packets in this way, but I am not understanding something at a pretty fundamental level, as follows:-

With IP rule set to:

and the lan-wan table set to:

Otherwise, in my case should I run that script you linked above?

Ultimately my main goal is to create an intermediate interface between br-lan and wan/wireguard thorugh which all inbound and outbound packets ingress and egress. I am really struggling to work out how to do this

I'm curious whether using veth is absolutely necessary on not.
What makes you think that utilizing veth is the right way?
Using veth typically involves setting up a separate namespace.
Are you sure multiple namespaces are supported by netifd?
Perhaps veth is not a suitable tool for this kind of problem.

It may well not be necessary. I tried setting up a software bridge 'lan-wan' with IP 192.168.2.1 and then the following rules:

And tables for all interfaces just setting default route to that interface.

But that also failed. I mean at least just outgoing ping 8.8.8.8 was not routed from br-lan to wan.

If using lan-wan could you outline just a basic recipe to ensure all incoming and outgoing traffic flows through 'lan-wan'?

It may require a separate namespace to work as you expect.
Or probably it's a design limitation of the veth interface.
Pretty sure it should work if you exclude veth from the picture.
Perhaps you should try a dummy/tap interface instead of veth.
It looks like this on my router:

The main table only contains the route to the VPN endpoint.
Most traffic goes to the rule with a priority of 40000.
Only a couple of local resources need to bypass the VPN.
See also: Routing basics > How it works

Thanks for sharing and for your continued help here. Could you possibly outline what rules you would add to route VPN/wan traffic via such a 'lan-wan' intermediate interface? That's the part that I am really struggling with. 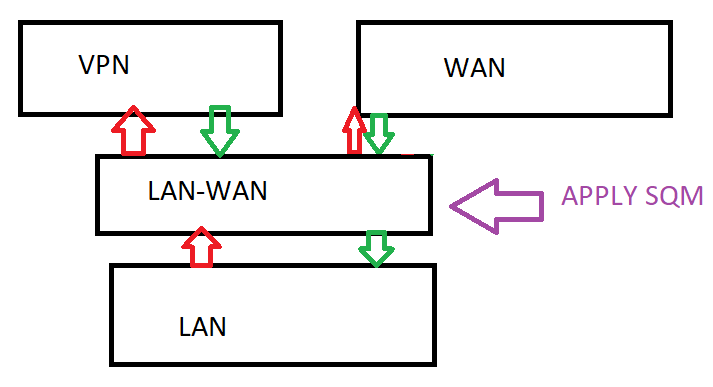 Also with your rules there how does ping 8.8.8.8 from lan client get picked up? Does it get caught by the:

BTW this is what I have now: