Is there a plug-in available for openwrt that can identify a connected device by the MAC address? Looking for an openwrt solution only. I’m aware I can manually lookup on various websites. Thanks.

I usually just run arp and it spits out the device name.

I usually just run arp and it spits out the device name.

What version of OpenWrt does this?

I'm running Linux which is what OWRT is based off of so, if you SSH you should be able to run commands to produce the output.

This is done by looking up the first three numbers of the MAC in a database. These numbers are assigned by an authority so that MAC addresses can be reasonably globally unique. The manufacturer part is called the Organization Unique Identifier. It doesn't appear that the OUI database has been made into an OpenWrt package, since it would be too large for the flash in many routers. A couple of MB is no big deal on a desktop.

The OP mentioned an OpenWrt solution...so I figured you showed a screenshot of OpenWrt. I guess not.

Is dhcp-lease-list part of another package?

You can view the DHCP leases issued by OpenWrt with cat /tmp/dhcp.leases Again there is no OUI database resident on OpenWrt so manufacturer names won't be shown.

Yes thank you, that is the issue I'm trying to resolve. Instead of a resident OUI database is there a utility that can query an external database?

but the lynx command is slow, and the file is large, I'd probably store it somewhere locally.

I'm using Netlink Bandwidth Monitor and find it suitable for my needs. Maybe it can be useful for you too. 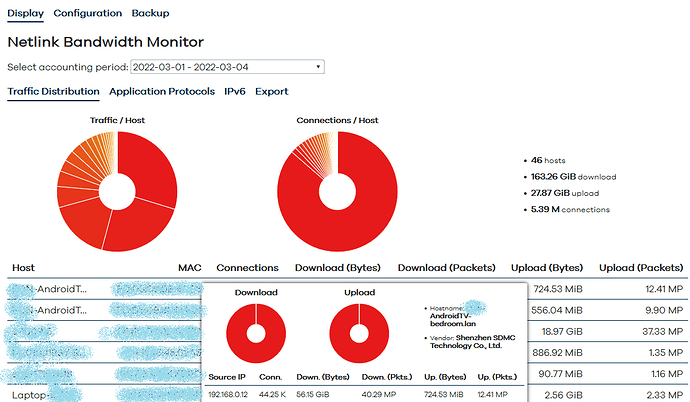