Forum posts have a date at the begining in the form"Month", XX. There is no indication of whether XX is the day of month, or partial years.

eg if date is March 18 ... is that March 2081, or is it the 18th March of some completely arbitrary year? That the date is not given in full, is bad enough, but this is worse than useless! Not only does the date not tell you the date, but you cannot infer the sort order either. Surely, somebody, somewhere has heard of Y2K?

To be human readable, dates should be in the format YYYY MM DD. Simple as that.

Others may not agree if you want to change it globally.
And I doubt it is possible to change individually.
Anyway, you should file an issue upstream:

To be human readable, dates should be in the format YYYY MM DD. Simple as that.

Have you heard about this little country on the other side of the Atlantic ocean called USA? They always write date with day in the middle. Probably just because Europe write it the other way around.

And not even Sweden internally has come to a agreement if the year are supposed to be first or last, so we do both without any logical rules about it, but we have a rule or at least an agreement of placing the month in the middle😂

But date is one thing, then we have 12 or 24h time and timezones and daylight saving time to agree on. And here EU failed.

Forum posts have a date at the begining in the form"Month", XX. There is no indication of whether XX is the day of month, or partial years.

Where exactly do you see this?

I see this when hovering over the 5h:

I think he has seen a old “archived” post, then you have this date display he talk about.

I’ve seen this a while back from 2017 for some question from pre-luci era that showed up here in the forum.

Not surprisingly, I am! However, I have worked in Aerospace and Medical electronics, where wrong dates causes deaths.

Its not about what is the local date format. There is no locale for which the answer does not provide a way to show year and day, with at least some means of showing which is which.

This was search results, so it is possible that the replies all came from the same year, and it referred to the day. However, the nature of the material covered suggested this was unlikely. Since they were sorted by month (as it came before the number) it was completely impossible to find out.

Even if some perverted American decided to put the fields in the wrong order (The "Recommended" order is Asia/Pacific) there would be no problem if years had four figure and days, two. Sure my hackles might rise, but probably not to the extent of posting ill-tempered wroth. I do have American relatives, you know.

In an international forum it seems ISO 8601 would be the ticket.

Discourse is a separate project which is not directly related to OpenWrt.
Use the appropriate communication channel to notify its developers of the problem.

This was search results 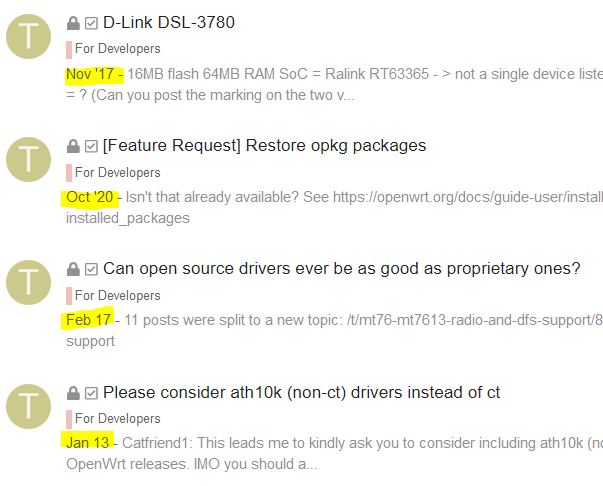 If you want to know the exact date, hover with your mouse over the "incomplete" date and it will pop up.

If you are not happy with this, please report at meta.discourse.org and try to convince the creators of discourse to change the way the date is displayed.

have worked in Aerospace and Medical electronics, where wrong dates causes deaths.

So then you should know that aerospace use z time, American dates, knots, nm, ft, psi, wgs84, lbs sometimes and kg sometime. But they at least have ordinary standardized seconds.
So not much SI-units found there. Aerospace isn't really a meaningful example for good standardization practice.

But to be honest I find it really hard to connect airplane crash with fatalities to a support forum for a hobby router software caused by the time tagging in a forum.
And if the post is so old that the system start to show month and year to begin with (instead of minutes, days and months) the information will be more or less obsolete anyway.

So since we are here anyway this Monday evening I am a little curious?
What is the actual problem you have with your router that made you search in this forum in the first place and that made you end up in really old treads which then ended up in this “time question”?

This is your first forum post and usually the first question from our new members usually don’t start in this forum group for feedback.

I have a BT Homehub5 that has been running as my main router for several years, but annoyingly overheats,
so I decided to buy aTP-Link VR200 to replace it. After buying it, I read the small print that 2.4GHz is not supported.

Evidently work is going on to fix this, and has been for a while. so I searched for VR200. I cannot tell if the work being done
was in August 2018 or 18 August 2021. I would say this is a complete failure of information transfer. Its not that I was angry,
but more shocked that a totally Nerd infested place like this would have failed to learn the lessons ofY2k.

Y2k was 20 years ago and probably some users were not born then, but you would expect that they might have heard about it.
Some of us are older, and learned COBOL in college. 2018 is not a long time ago to me, its more like yesterday.

More to the point, In medical and Aerospace electronics, you are told that this kind of error leads to death, and should be avoided -

in the same way that you don't let children ride pedal cycles out into the main road. It is not so much annoying, as dangerous, not

just in router software, but in every day life. and evidently some people don't know. These days, we have a thing called the internet,

and what you type and what I type, is immediately visible across the world, but people live in locales, where time is expressed differently.

This is not about that, nor about investigating the state of VR200 software, it is about getting the message across that, if an issue needs
a date, then that date needs to be unambiguous, because otherwise people you don't know could die for reasons you don't understand.

Anyone involved in poking software with a stick needs to be aware of this. Its not a laughing matter.

Early on in my career, I was told "remember when designing electronics, the people using it may be upside down, in a ditch, with people
shooting at them". Someone needs require all UI designers to spend a whole day being told this!

"usually the first question from our new members usually don’t start in this forum group for feedback."
As we say in this country ... "If I were going to there, I'd never be startin' from 'ere!" - you are not me - and vice versa.

Even if you are new to it, and not very good at it, you should remember that the job you did when told "run it up the flagpole
and see who salutes it" may be issued and shipped to outer space without you being told. Obviously, that would be a stupid thing to do,
but since when has "things being stupid" stopped them from happening?

I am still very sure that all the devices OpenWRT is able to install on has a factory message in the user guide that it is not licensed to be used for medical or life support functions.

I can also guaranteed that OpenWRT doesn’t have any quality control program licensed for use by life support equipment.

You need to lower your standards a lot for home routers and home network. The reality is in the bottom line “if it works it works and if it doesn’t work it doesn’t work” and OpenWRT don’t have any functional guarantees at all.

I am sure you are correct - however you are missing the point - which is that good practice should be encouraged at all times,
and that regardless of your expectations,

You may live in a well structured environment where people obey the rules, others, only microseconds away over the internet,
do not. What is a hobby for you could be a life saver for someone on the front line of a battle 10,000 miles away. You will

Absolutely nothing in this world is advanced b ambiguous dating. Someone's life could be saved in some battle zone somewhere
by having a router (or any other piece of electronics) which was meant for something else, work in an emergency.

Just because OpenWRT has no quality control process, does not mean that someone in a life-threatening situation would not prefer to
use an OpenWRT router to no router at all. If you are in head office, specifying that to use, you might not specify OpenWRT.
If you are lying down in a ditch in Sudan under heavy fire, and an OpenWRT router is the only way you can make a secure

request for a helicopter to rescue you, would you choose to die, rather than boot up the router?

If you always do dates right, you won't ever do them wrong.

But date is one thing, then we have 12 or 24h time and timezones and daylight saving time to agree on. And here EU failed.

afaik the only country using 12h time has left the EU, timezones are not something you can unify for obvious physical reasons, daylight saving is unified (in the sense that everyone switches the same day apart from lithuania or another similar nation).

If you always do dates right, you won't ever do them wrong.

I think you are asking too vehemently something that is quite frankly irrelevant in this context.

Yes the forum software could show better dates, but it's still fine and nobody will die because of posts in OpenWrt forum

I am trying to teach an attitude to life that values risk reduction over pettiness, using this as an example.

When you get older you will also realize the world is never perfect and “good enough” at best is what goes around.

Military things never work! They are only build by the cheapest bidder😂

You may live in a well structured environment where people obey the rules, others, only microseconds away over the internet,

Haha, it is a long time ago anyone did this where I live. That is probably why I don’t care any more if it works or not. Someday the sun shines and some other day the internet is lost.