i clicked add in the sqm tab and have tried every interface but none of them work. eth0.1 br-lan eth0. nothing. every time i transfer a file it ignores the sqm ingress and egress limits i set. what am i missing?

also i have a main router with openwrt (r6220) and a second set up as access point. i have tried all the interfaces that correspond to lan on BOTH router and AP but nothing.

also the second router is wdr 3600 with openwrt and setup using the dumb ap recipe if that helps. im sure it would work if i used the second router as a router but then i would be doubled natted and i dont want that.

That depends massively on what exactly you want to accomplish.

As long as the switch is configured to bridge all LAN ports in hardware, with wlan bridged into br-lan, the traffic bypasses the CPU and with that the possibility of traffic shaping. If you dissolve the bridge and the configuration of the hardware switch fabric, pushing all traffic through the CPU port and doing SQM there, you will take a huge performance hit. Unless you're dealing with very low throughput WAN stations (significantly below 100 MBit/s, as around 120-150 MBit/s (without SQM, with SQM enabled below 100 MBit/s) is around the maximum aggregate (LAN, WAN and WLAN) throughput the tl-wdr3600 can handle), it's not going to work (sensibly).

internet speed is only 25 meg and the wdr is only serving as an access point with the r6220 being the main router. if i need to replace the wdr i will. what i want to do is use sqm to control local traffic. like when i do file tranfers with windows from machine to machine the ping is ok when you are sending but not recieving (or maybe it was the other way aorund).

basically ill worry about the performance. i have some x86 machines laying around if i need them. im just looking for someone to break down how to set it up (preferable as much in luci as possible). and would i need to do it on the main router or both or just the AP?

or possibly if anybody has any links to some info on how openwrt deals with ports and the like. im far from an expert or even proficient. i know the lan is set as one vlan on eth0.1 and wan on eth0.2 right? so i would need to take the ports off vlan eth.01 and then....?

or just explain the switch section of luci. tagged and untagged? what does all that mean. i know people dont wanna break the whole thing down for me but is there a link to something to explain it?

would moving everything to gigabit fix the problem of file transfers? some of it is mixed

would it be simpler to just install the second ap as a router and make a new subnet? if so can i still get dhcp and upnp to work (i know its not the securest thing but still...).

this is mainly a learning excersize. i dont really need it to work i suppose. just trying to learn how it works

Can you draw a network diagram and tell us what local traffic you are concerned about.

internet speed is only 25 meg and the wdr is only serving as an access point with the r6220 being the main router. if i need to replace the wdr i will. what i want to do is use sqm to control local traffic. like when i do file tranfers with windows from machine to machine the ping is ok when you are sending but not recieving (or maybe it was the other way aorund).

Internet speed isn't the issue here, traffic between LAN (or WLAN-) stations would be.

Using the (default) switch fabric you will get 1 GBit/s line-speed between the LAN ports easily.

If you do the bridging in software instead, so you can do SQM, your aggregate speed shared among all 4+1 ethernet ports and both WLAN cards will be under 100 MBit/s (more like 70-80 MBit/s), now have fun breaking that down to 4+1 ports plus 2* WLAN.

As soon as SQM enters the picture, tl-wdr3600 and r6220 won't differ that much in terms of performance, yes, the r6220 will be faster - but not by an order of magnitude.

ok im not sure what you mean by network diagram but ill give it a try. remember im looking for someone to play with me in the shallow end of the pool so please dont be mean : ) 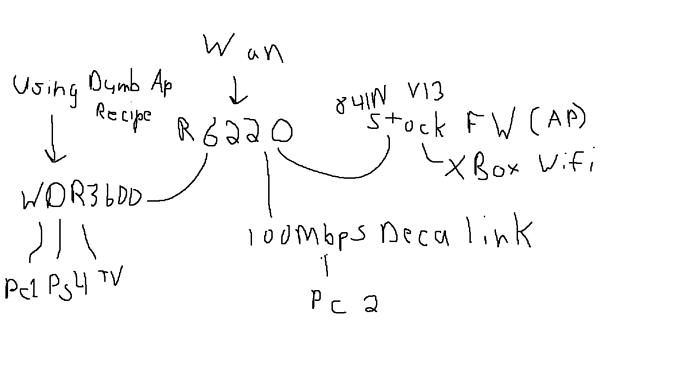 when i transfer from pc1 to pc 2 i get high ping on the sender but not the reciever. then i switch and transfer from one to another and then the other one has high ping. the deca adapter gets full 100mbps though so the connection is solid. would the deca link being 100mbps vs pc 1 having gigabit link cause that?

yes i know wan speed wont matter, only local but then you said this....

Unless you're dealing with very low throughput WAN stations

so i just threw that in there. thought you meant something else.

Internet speed isn't the issue here, traffic between LAN (or WLAN-) stations would be.

Using the (default) switch fabric you will get 1 GBit/s line-speed between the LAN ports easily.

If you do the bridging in software instead, so you can do SQM, your aggregate speed shared among all 4+1 ethernet ports and both WLAN cards will be under 100 MBit/s (more like 70-80 MBit/s), now have fun breaking that down to 4+1 ports plus 2* WLAN.

As soon as SQM enters the picture, tl-wdr3600 and r6220 won't differ that much in terms of performance, yes, the r6220 will be faster - but not by an order of magnitude.

ok i understand that. but im not asking about performance. im asking how to do it. or at least can i sqm the ports linking the main router (the r6220) to the wdr 3600 so that just data coming in from or out of that one port gets sqm'd?

also if i used x86 machines it might be possible right? im just wondering how one would actually set that up in openwrt. or if having gigabit on all devices would stop the high ping when transfering. i mean having all real time apps stop because of a file transfer cant be something that people put up with. is it just because the buffers are filling up on the 100mbps device?

or in other words can i just sqm this one link and if so which device do i set it up on and how? and by this one link i mean the one in the following pic in red 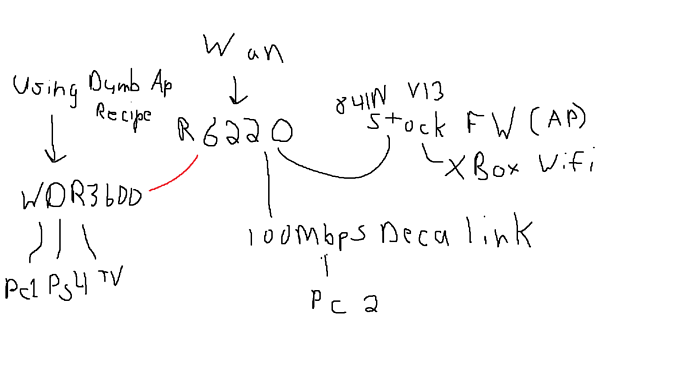 maybe i should try to transfer from gigabit port to gigabit port instead of using the deca adapter. i will move a laptop into the router room and see if that makes a difference

Yes, you can - I just don't think the results would be an overall improvement. You (hopefully) buy a slight improvement in latency with a significant degradation of inter-LAN throughput (because of the hardware performance clipping throughput and the traffic shaper). If that's worth it and a net-improvement can only be tested in your actual environment and with your hardware, my gut feeling advises against it though - recommending trying to fight the actual source of your latency problems instead, trying to ensure low-latency 1 GBit/s connections over the branches of your internal network.

ok ill take a laptop into the router closet and see if having it all on gigabit fixes the issue. its not really an issue. i was just curious. if the entire network ran at 100mbps that would be fine with me though. im assuming that if i did run that one link in red through sqm i would set sqm up on the wdr 3600 downstream router yes? anyway i will let this dog lie for awhile. thanks to everyone for your help. and again if anybody has any good web resources i can look at to better understand whats under the hood with openwrt they would be appreciated. and again thanks

What you need is to do sqm on the one port where your DECA adapter is, problem solved... It's always the slow link that needs management.

The way you do this is to add a vlan to the 6220, make the deca port untagged in this vlan, and add eth0.x to br-lan where x is the number of the vlan. Then put sqm on eth0.x set it to 95Mbps or so.

brilliant!! thats exactly what i was looking for. thank you very much i will try that tomorrow and get back to you if it works. but that sounds like exactly what i wanted and with very nice directions.

i should have explained that i really only need to sqm one connection (router to ap) instead of the all lan ports. openwrt is such great software. ill be sure to make a dono when i can. i donated to a guy who helped me with a uboot but i havent supported openwrt yet. everyone does such great work. wish i knew enough to help.

Also if your problem is really connecting PCs 1 and 2 you might want to try connecting both to the same switch, so either both to the wdr or the other router, that way their traffic will not affect the other devices. I concur with @dlakelan the remaining issue is going to be the speedstep between the 1Gbps of the PCs and the 100 Mbps of the dacalink there a traffic shaper AQM might help, but by default sqm does not really do what you want there....

it would be nice if i could put both on one switch but that would require running another line throught the wall. but i already knocked out the back of the outlet box to get the first line in so not that bad. but its not really a big concern. i rarely do any major file transfers. just remote into the box once in awhile. i mostly wanted to know how to apply shaping to something other than the wan port. i may run another line to it yet though. but if i did all that i would rather run a wire to pc 2 so that it has gigabit as well and then replace the 841n with a gigabit router as well. but i have to work around the other people in the house and as i said my problem was mostly theoretical so i think i will focus on replacing the 841n ap and then work on replacing the deca link on my pc (pc2).

thank you both for your help.

edit: am i supposed to "close" this? like a ticket? if so ill just select a response as solving it because it wasnt really a problem anyway. not sure if thats how this works but ill do it anyway