How to force clients to use DNS server on OpenWrt AP?

Couple days ago, I set-up a dumb AP running OpenWrt at 192.168.1.10 with DNS & DHCP duties all forwarded to the router at 192.168.1.1. Today I decided to enhance the AP's functionality slightly by turning on dnsmasq and only use it as a DNS server (DHCP still forwarded to router).

The main goal is to use Steven Black's compiled hosts file to do some adblocking. Through a combination of configuration via SSH & LuCI, I've managed to modify the dnsmasq section of the /etc/config/dhcp config file to the following:

And it appears to have been configured correctly on the AP at least, since when I run from the OpenWrt # nslookup googleads.g.doubleclick.net, I get the following output:

Similar story for # nslookup adclick.g.doubleclick.net. Both of these domains are on the base compiled hosts file, and their IPv4 addresses correctly get resolved to 0.0.0.0.

However when I connect to the WiFi generated by the AP through my phone and my PC, and go to a site that I know a priori to show ads from both ad domains above, those ads are still fully visible and clickable. When I run $ nslookup googleads.g.doubleclick.net from my PC, the domain gets resolved to the ad's intended IP of 172.217.164.194, which I suppose means that it's not actually using the DNS server set-up on the AP. Also I did not manually set DNS servers on the network connection from my PC client, and simply left it as "automatic".

I wouldn't be surprised if it's something obvious that I've missed, which would lead me to facepalming once revealed. Any help and ideas are appreciated.

Just to elaborate a bit more, I'd like all clients, in particular smartphones & tablets, that connect to the AP's WiFi to be able to use the DNS server running on that AP itself.

Of course on my PC I can just manually set the DNS for the given connection to be that of the AP, and that does work, though I still do think it's an extra step and a bit of a hassle, especially if it must be done for all computers that connect to my network.

rotuer is openwrt? if so un can use dhcp-optionst to push dns server to clients. 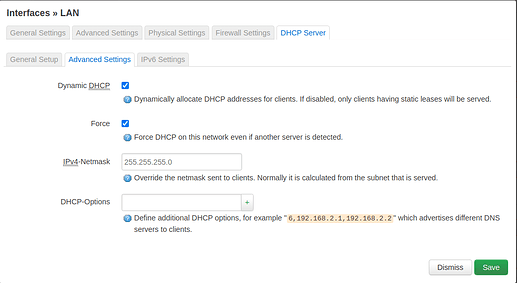 Actually my router isn't running OpenWrt, and it likely won't be, at least for a while. It's a stock modem/router combo from my ISP running their OEM crapware, which has malfunctioned, and won't even provide me the options to make any config changes through their webGUI. They said they'll ship me a new modem/router, but in the meanwhile I'm still waiting on it.

other option would be dns hijacking (i use it to bypass chromecast dns) https://openwrt.org/docs/guide-user/firewall/fw3_configurations/forced_dns_redirection but if your router does not allow you to do almost nothing i cant think of any other options.

How do I configure main router to redirect traffic to be filtered by OpenWrt first? Installing and Using OpenWrt

Install AdBlock and set OpenWrt to the wireless AP mode. Set up a static DHCP lease or a static IP address for OpenWrt. Configure one of the following: Push OpenWrt IP as your primary DNS on the DHCP server. Use OpenWrt IP as the upstream DNS server on your primary DNS. Manually override DNS settings on the clients.

Screenshot from 2020-07-12 03-38-161491×699 67.3 KB
Although what I'd like still isn't working yet, probably because the problem remains at the clients not actually sending their DNS queries to the OpenWrt AP for this firewall rule to take place in the first.

I'll leave the rule in place though, as it'll likely be useful down the line, so thanks for the idea.

Thanks for the suggestion, though this won't quite accomplish what I want at the present.

I didn't mention this earlier, but probably should have since it's very relevant. I have a second AP in the house (also running OpenWrt), which I don't plan to do this hosts-based filtering on, so that clients connecting to this one will have their name queries forwarded directly to the DNS server on the ISP router, or Google's, or CloudFlare's, etc.

Maybe down the line, I'd want hosts-based filtering to apply to the entire LAN, at which point your suggestion should work. But currently I'm only looking to do filtering for clients connected to AP1.

missing ip? mine points to main router i guess yours should point to your ap dns.

Note, that intercepting DNS requires a working firewall, which is not only typically disabled on a dumb AP, but also requires some extra steps to work with bridges.

I'd tried with it added too, but it didn't change the result (or lack thereof). So I just left it out, assuming that without specifying the forwarded internal IP, it'll just go to the device itself. But you're right, better to be more explicit.

Hmm, that's good to know and makes a lot of sense. I shall look into this.

It would be easier to disable the dhcp server on the router of your provider and enable it on OpenWrt. This way you can advertise OpenWrt as nameserver and the ISP router as gateway (dhcp option 3).

Yea, I'll give that a shot once the new modem/router combo from my ISP arrives.

Using this method, for my AP2 whose connected clients shouldn't have DNS-based content filtering done, would it work to simply set its DNS server to not be AP1 (but still use AP1 as its DHCP server)?