Hello,
I have issue with setup of IPTV.

I have internet connection by PPPoE.
For internet I have to use VLAN 2510, for IPTV is VLAN 2513 required. Both - WAN connection and IPTV needs to be DHCP clients.

My setup unfortunately does not work: 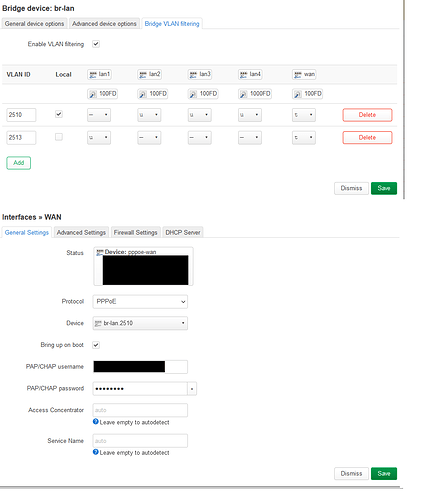 In this setup IPTV works, but router is not accessible and there is no internet connection (from all devices), so I have to revert changes.

Thanks for your help

I have internet connection by PPPoE.
For internet I have to use VLAN 2510, for IPTV is VLAN 2513 required. Both - WAN connection and IPTV needs to be DHCP clients.

It cannot be both pppoe and dhcp. Either the wan connectivity will be with pppoe over vlan 2510 for internet and another wan pppoe over vlan 2513 for iptv, or you'll setup dhcp client on these 2 vlans.
Which provider is this and do they have some support page explaining the configuration needed?

ISP is Slovak Telekom. I also tried to setup 2 pppoe WANs- for internet and for IPTV, but this did not work. I need to have one single PPPoE connection and forwarding to physical ports by VLAN filtering.

I assume I need dhcp client for those 2 VLANs. I just noticed when I used other router that WAN received public IP (as DHCP client) and also noticed that IPTV STP received private IP (10.x.x.x).

I suppose that you get internet by ADSL or VDSL, right? So there is some modem connected upstream to the WRT.
The other router that you said you used was only router or modem/router?

ISP uses "Active ethernet" technology. I connect via ethernet cable and PPPoE is used. No additional modem or router is connected.

Without more information it's purely guessing, but I suspect that pppoe is setup on a vlan and the iptv needs bridging the vlan subinterface of wan port to a lan port. For the latter you have it right in the screenshot. For the first, you need to separate the lan2-4 to a new vlan, which will be for the lan only.

Does your pppoe-wan status show an IP address obtained? That means the PPPoE connection is up, but as @trendy said, you need to set up another VLAN to bring the LAN out of the router to your wired devices. Right now you have them switched directly to the modem, and since you need to route and they don't speak pppoe anyway they have no network access.

VLAN 2510 should be tagged to the wan port (the modem) only, and off in all the other ports. It is still inherently available to the CPU as br-lan.2510. Then create another VLAN with any number you want (it won't appear externally) here I will say it is 1. That VLAN will be untagged to lan2 lan3 and lan4. The lan network interface would have device br-lan.1.

Btw. this is my previous configuration which worked correcty, probably version 19 - without DSA 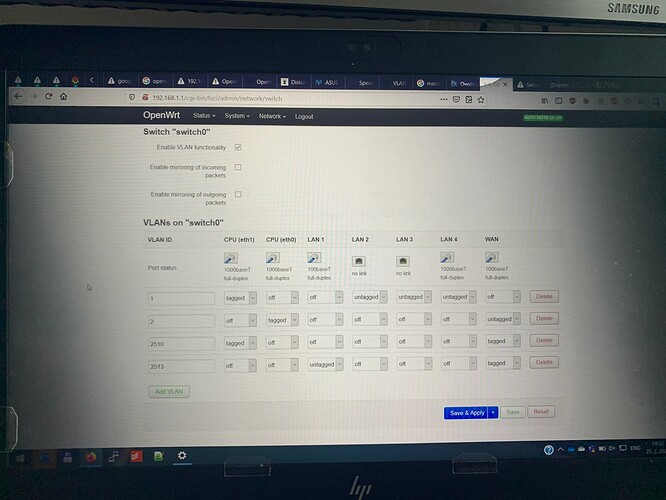 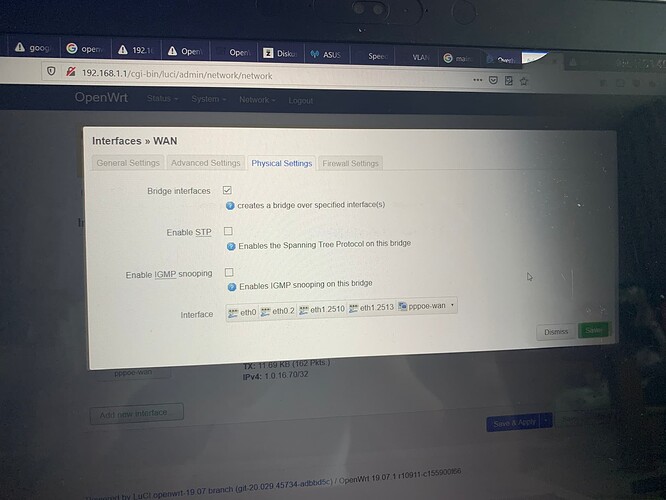 This setup is how I understood your advice: 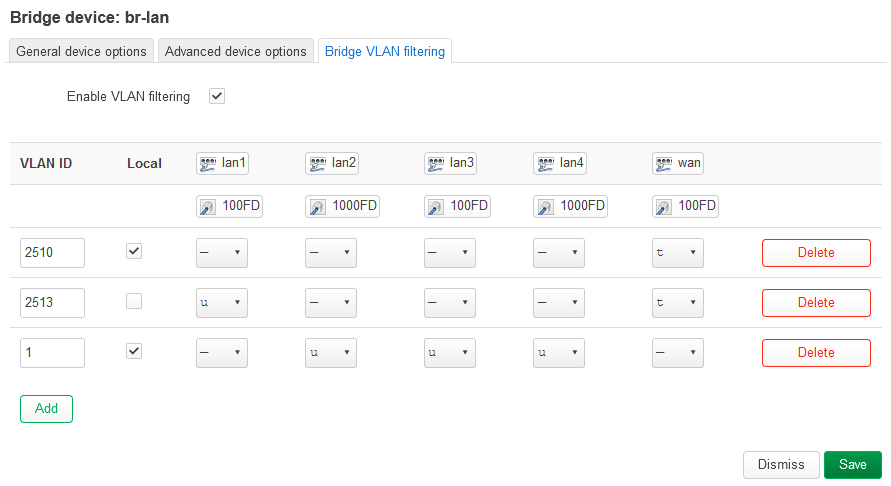 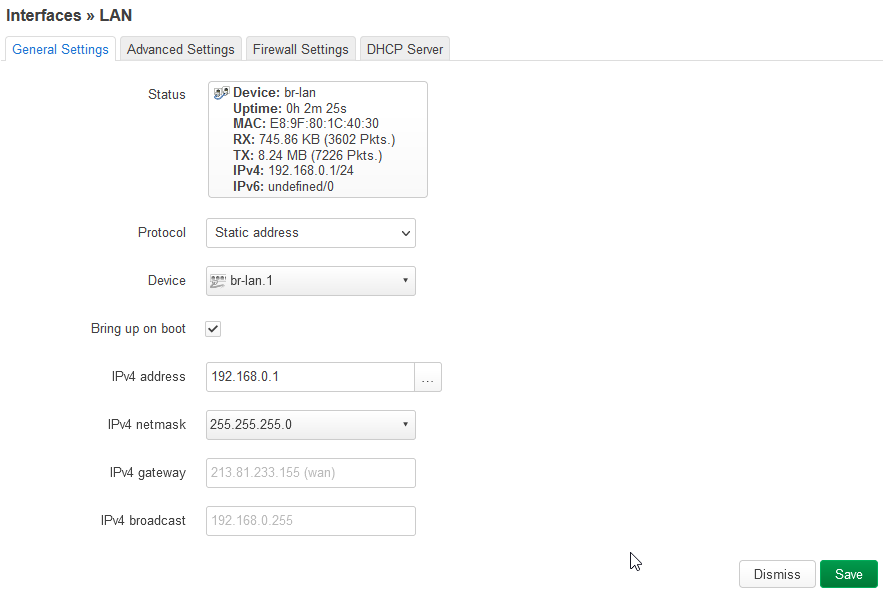 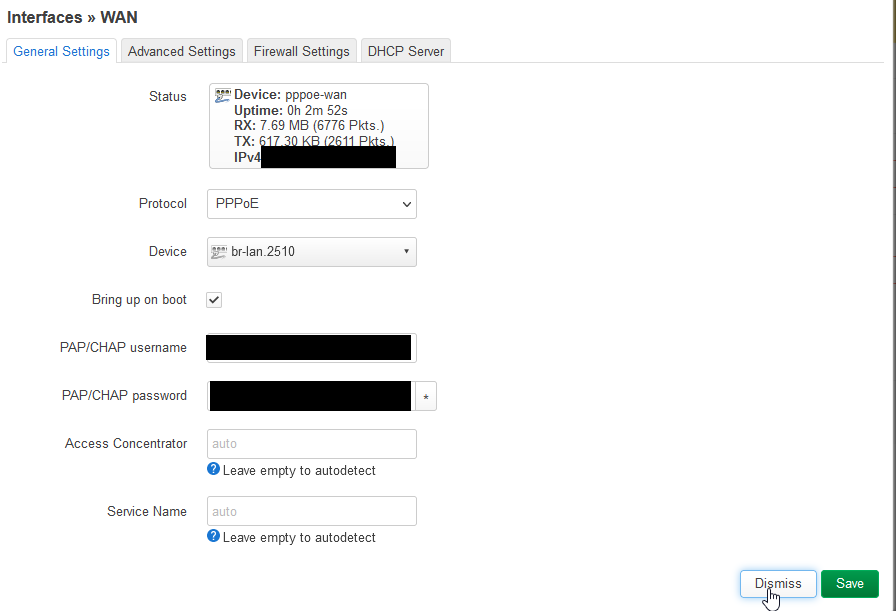 ...but problem persists - I cannot log in to Luci and I have to revert changes. IPTV and internet connection does not work over cable