Hopefully someone can share some pointers/guides with me. I would prefer the LuCI web interface guides. This is what I am after 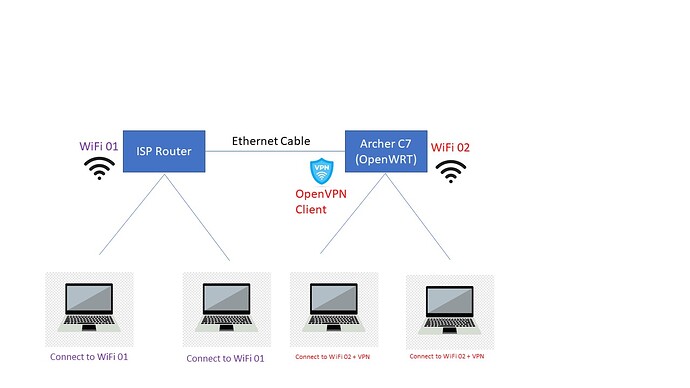 So far I've managed to connect Archer C7 to my ISP router by using WiFi client guide, but all that does is extend my existing WiFi. I don't want that, I wanted to create a new WiFi SSID. I can see options of creating new WiFi but I don't understand how to add firewall rules/any changes to network interfaces.

Also, what do I need to do to connect by Archer C7 to my ISP router via ethernet cable? Is it simply a matter of connecting LAN <-> LAN or should it be Internet port of Archer C7 to LAN port of ISP Router. Also, any changes in Firewall, Network interfaces required to get this running?

I've managed to install OpenVPN client & have that configured and it's running.

Thanks a lot in advance

or should it be Internet port of Archer C7 to LAN port of ISP Router.

In addition to what was said, you need to to your C7 WAN Interface (Internet port) as DHCP client (which is the default anyway).

An alternative option would be to use VLANs on C7 to make one WiFi that goes through VPN and one that doesn't.

Thanks for your reply. I've connected my C7 with ISP router in AP mode. My LAN IP is in the same subnet as ISP router IP. Is that an issue for VPN to work?

After doing this, I can't get my devices to get VPN. They're bypassing the VPN. I'm missing on something trivial. This is what my interfaces looks like: 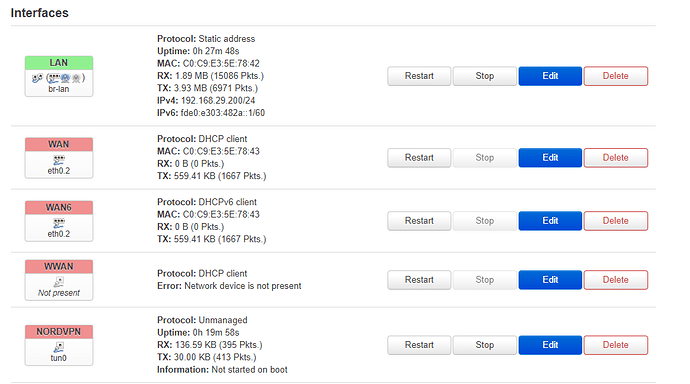 You already got pointers, yet you ignored them.

If you want the 2 routers to have separated networks then you would connect the network cable in the
Internet port on the Archer Router going towards a Lan port on your ISP Router while ensuring that both routers uses different subnets.

If you would want to have the 2 routers to be within the same network so that all the devices connected on either router would still be able to communicate with one another, then you would connect the network cable in the Lan ports of both routers, while also assuring that both routers would use the same subnets (but a different digit at the end to avoid IP Address confusion).

Subnets being the 3rd digit in the IP

Ok, so I finally got this up and running. Barney, mk24 and Blackcat1987 your posts were helpful. Thanks.