Greetings, I'm new to OpenWrt, been using it for a couple of months. so I have this doubt, I currently have my internet service that's 1MB with my Cable ISP, so my friend is sharing me his wifi password (He have 4MB) .

Due the fact that his signal is weak, my PC doesn't reach it, I have to use my router as a Client+AP to extend his signal so I can connect.

But I've been wondering and searching with no luck, if there's a way to configure the router with OpenWRT to create two SSID (or 2 Wifi) that will distribute both internet?

Is there any way to configure it?

You can setup WWAN by hitting the Scan button:

Please be advised, your client WWAN connection has to establish before you can [re]use the AP SSID. This is because the WiFi channel needs to be determined by the WWAN connection. So you'll likely want to set this up with a wired Ethernet connection to LAN.

Greetings, I already know how-to configure Client+AP as my post state, I've done it so I can access to the second Internet (My friend's router), what I want to do is to know if there's a way to create 2 wifi signals, where Wifi-1 will provide internet from ethernet(wan interface), and wifi-2 will provide the wwan or client+ap. Thanks for the reply.

If that doesn't work smoothly, other way to take the solution would be to get an external USB adapter fort your PC that you can connect with a USB cable and fix on your window to pick the other network.

By the way, you should consider updating your OpbWrt

I know, once WWAN is created, any other SSID is locked to the same channel, thing is both SSID will still provide internet from just one interface, either WWAN or either WAN whichever boot first it seems, as I tried it early.

^ That's correct. Also I guess there's no other update for this Router than 17 due the fact it's 4mb flash. Update to your first reply mhegab: That's actually why I'm using it as Client+Ap mode, distance it's too far to buy an usb adapter and an usb cable to fix it on the living room window

I understand that; but it wasn't what you asked. You would use policy-based routing:

Replace wan2 and lan2 with your correct Interface names.

More info: Use WireGuard interface for specific devices only

Again, I posted the answer above.

In the example above:

I saw it, but as I said i'm new to this, where the routes policy goes? I have to do it manually throught ssh?

You must also permit forward from LAN2 to WWAN.

Ok thanks i'll try it, quick question as reading the parameters for route, the gateway for "wan" will be a problem if my ISP is DHCHP? as I know for "wwan" I suppose the gateway will be my friend's router. But for "wan" what should I place?

I never gave you instructions for wan, only wan2 (WWAN).

There are actually some long range USB WiFi adapters with power and antennas comparable to routers (though not very cheap, so if you don't get a good connection at the end it's not nice). Therefore if you get the configuration you were asking for to work smoothly then best.

Ok these are the interfaces done I guess, they have both different subnet, i'm going to place your route config. the "option target" and option "dest" are the subnet IP or is the device i'm going to connect? due the Lan1 and lan2 have dhcp server on. 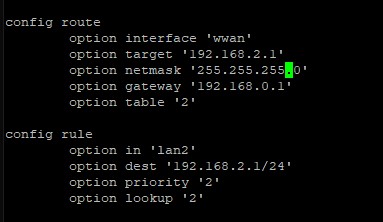 There are actually some long range USB WiFi adapters with power and antennas comparable to routers. But if you get the configuration you were asking for to work smoothly then best.

No money for it, too expensive in this country.

the "option target" and option "dest" are the subnet IP or is the device i'm going to connect?

Subnet and destination are as I stated:

You only edit wan2 and lan2 for wwan and lan2 - and add the correct gateway. LAN and WAN should use the normal setting.