During an update, i hard bricked my 4A and since nothing happened when i plug it in my pc with ethernet cable. I fix the ip on 192.168.2.1 (as you can see on the screen at the end) , file "test.bin" with last firmware is OK and then : "DHCPc:no other DHCPd discovered"

Power button is OK (when i hold 5 secondes it start to flash) and internet button is blue fixed everytime... When i type 192.168.31.1 nothing happened.

With Xiaomi repair toolkit, yellow button is bliking every secondes. Blue button is blink very very quickly during 5seconds at beggining of procedure and then stay fix. And nothing happends, no transfer...

I'm sorry to make a new post for this but i read all this topic and i'm a little confused ... i tried every single methods to unbrick my 4A from @Zorro, both videos of @hoddy, kurf11k ... . Tiny PXE, Xiaomi Tool repair, DHCP mode + Tftpd ... But software never recognize my router plug with an ethernet cable to my pc on the blue port (right side from behind). 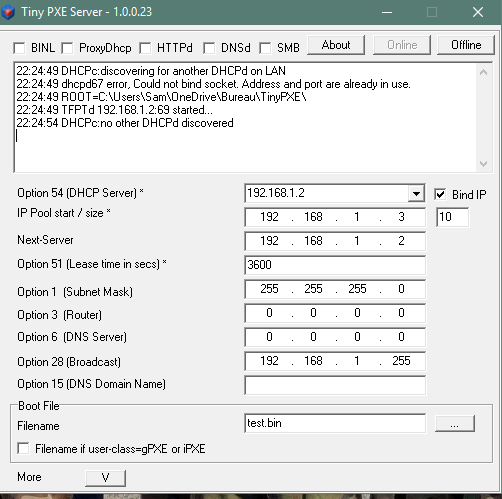 Your screenshot says 'dhcpd67 error, could not bind socket, address and port are already in use'
So it seems you have another process using the dhcp port?

I dont use windows so cant help you on that, but my docker recovery image will get your router going again in linux.

Yes it's a wifi laptop and it's connected to internet in dhcp when i'm doing the procedure. I will try with wifi disconnected (i don't think it that because i ve also try on a desktop pc without wifi) and i tell you quickly.

I've a virtual machine with the last ubuntu on it but i'm novice novice in ubuntu do you think you can guide from A to Z?

You will need to have an ethernet cable and plug the laptop directly to this 4A router.
In your ubuntu vm, make sure you have this interface set to a static ip address.

Then clone my repo -

In a terminal on the ubuntu vm,

On the router, unplug power, hold reset button, keep held down, plug power back in, release reset button once orange led is flashing.
You can watch if the dnsmasq has served the file by doing a

Just make sure ethernet interface in virtualbox is a bridged mode so the router can pick up the bootp mode.

Ideally for all of this you need a uart lead to see what the router is doing, as its possible the flash chip is faulty.

Sorry, forgot you need internet on that pc to download the docker images.
So in virtual box, add another interface as a nat interface, set it in ubuntu vm as dhcp.

The static ip you set, remove the gateway part as thats not needed.

Just a note, if the router doesnt pick up the bootfile, just do a

Hi, I think there is something wrong with the steps. I did everything as you instructed, though docker doesn't seem to be creating the right container. The build script seems to be running fine as it outputs

Works fine for me?