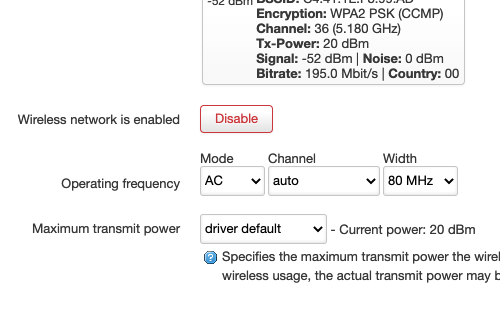 is what my setting is correct ?

Thanks for the 802.11ax tip, I’m thinking about getting the e8450 and just wondering which flash method you used, the ubi or non-ubi and if there were any problems with the flash (doesn’t seem to be much documentation on it yet).

Have you enabled ax with the command provided by @jiegec and restarted the network?

If both routers are identical from the same company.

Only that one is white and the other is black.

Thanks, I just assumed the Belkin would be the same price and didn't bother to look it up.

And Belkin had a 10% off coupon, so actually 60 USD cheaper. All the main router companies do a lot of marketing on their router models, often many models share the same platform with functions neutered in software to differentiate models from each other. Often, WIKDEVI and FCC filings are the only truth about what is really in there.

Nice.
How do these mediatek devices fare in comparison to the qca/ipq80xx hardware. I own an r7800 so trying to figure out whether this is a good way to future proof without spending too much. the belkin is reasonably priced (i could care less about triband at this point), but things that are important to me...
160mhz 5ghz bandwidth
router processing power
mesh/wds support
driver (i hear mediatek devices have hardware flow-offload or hardware nat enabled)

How do these mediatek devices fare in comparison to the qca/ipq80xx hardware. I own an r7800

They are hard to compare, especially with the rather limited feedback received for mt7622b in 1 GBit/s WAN situations (with/ without SQM) so far.

mt7622b seems to share very well optimized ethernet drivers with its (ra)mips based predecessors (e.g mt7621a), but is limited to 1 GBit/s ports due to its included switch hardware. In stock OEM firmware, The various ipq80xx systems rely on a proprietary NSS firmware, offloading parts of the networking to an ubicom32 derived little-endian NSS/ NPU core (well, two of them in all cases) and are designed to support up to 10 GBit/s ethernet (or 2.5GBASE-T/ 5GBASE-T) that way (you will rarely find those in practice on ipq806x devices, but they're common for ipq8074).

But ipq806x is battle-tested by now, while mt7622b+mt7915e is still very new (and still being improved, with some fluctuations) - and ipq807x isn't supported yet at all. So fair comparisons remain hard for the 802.11ax chipsets, based on not enough data points or none at all in case of ipq807x. What is clear, is ipq806x maxing out somewhere between 400-650 MBit/s WAN speed (without sqm, with sqm just under 200 MBit/s), mt7622b seems to beat that - I have not heard enough feedback about the wireless performance/ stability (but no complaints either, everyone seems to have been rather pleased so far).

hello everyone here is my test published with sqm on a fiber, the question I ask myself is can I use fq codel + simple qos to have a qos and thus can have high bitrates?

all suggestions are welcome thank you

OT: The name of your ssid mmd

Hello, I just got my hands on a Totolink X5000R and flashed openwrt on it. After installing luci and a few other packages I can't seem to be able to choose anything on the 5Ghz frequency, that includes 802.11n 802.11ac and 802.11ax.

What else have you done to get your device working?

All I did was run the three commands in my post really. I note that it doesn't work in the Luci GUI, so you need to do it via the command-line 'uci' tool.

Just a small reply to tell it works on the E8450 with HE160 since recently too!

This is awesome many thanks, ordered a Belkin R3200 for roundabout 89€ too used on amazon.co.uk (shipping to germany) after reading its specs and the post here.

Mind you someone with fiber tested it as well in the above linked topic and managed to almost max their speeds out (1 Gbits).

Now I have something capable to play with on OpenWRT.

Did any of you test if wireless bridge/wireless client mode works?

That would be awesome to have.

To me these are strange results. I have this router and (only) a 300/300 Mbps connection and it seems to be routing that with sqm cake (I think) with ease (it gives full internet speed with speed test with 5ms ping time and A+ in buffer bloat test) and the internet feels very responsive and stable, surprisingly may be even better than my x86 with OpenWRT vm. 2.4 GHz works extremely well (gives 100mbps in speedtest on 2x2 20mhz close to the router and unlike my other mt7621 router my phone does not complain about there being no internet when being away from the router). 5Ghz signal is somewhat weak, although speeds are ok when being close to the router. I didn't really test 5Ghz and had not used 160 MHz (my only ax device with 160mhz is my desktop, which seemed to connect fine to the network but the signal was low and it is hardwired anyway). My phone which supports ax seemed to connect fine and gave my full internet speed and showed WiFi 6 logo, didn't test it much further. Overall, I hadn't noticed any instability with wifi (and hadn't heard complains from my family members). My only issues are that 160 MHz connection is shown for all WiFi 5/6 devices no matter the actual bandwidth in LuCi, +17 dbm signal strength (for some reason the same happens on 5Ghz radio on redmi ac2100) and I had once seen the WiFi bug out and my phone not being able to connect to 2.4ghz about a month ago, though that might have been due to DAWN bugging out again, and I hadn't seen any of that on the latest snapshots. Overall I'm quite happy with this router (apart from 5Ghz weakness)

Interesting, as I do get exactly the opposite results 5GHz being more reliable - however I just use it as a wireless (Wifi 6) bridge (as in Client-Mode).

Flashed it with latest image from

OpenWrt firmware installer for the Linksys E8450 aka. Belkin RT3200

Thanks a lot. This smal line makes my Sunday great:
wireless.radio1.htmode='HE80'

The Wifi 6 ax is activated on my new Ubiquiti Lite U-6 and runs.
The GUI just shows AC, but the client says AX

he GUI just shows AC, but the client says AX 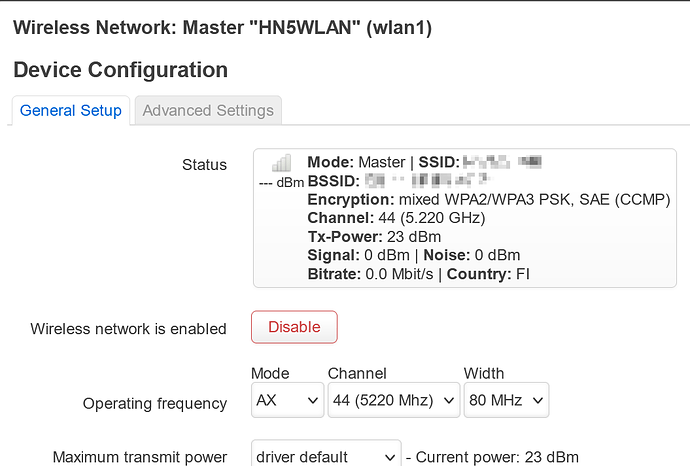 Hi there
I just tried this with my 8450 and I received a "Invalid Argument".
Do I have to add the device, if so, how?