Getting rclone into OpenWrt?

rclone is an amazing utility. There is a feed here: 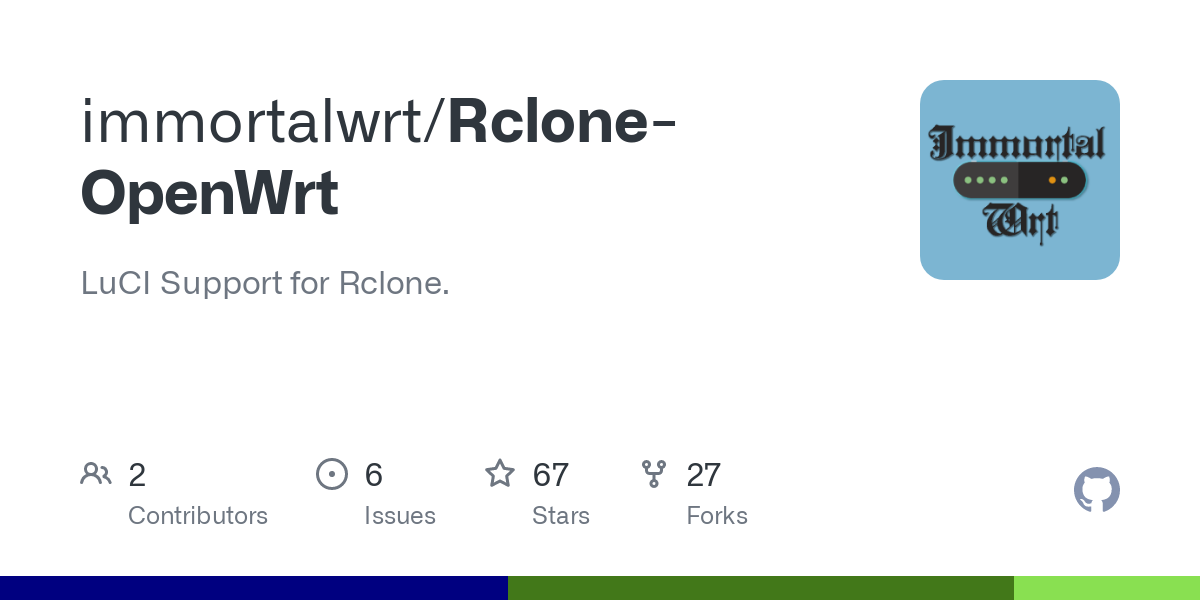 LuCI Support for Rclone. Contribute to ElonH/Rclone-OpenWrt development by creating an account on GitHub.

it works very well. You can sync files to cloud storage like OneDrive or Google Drive. I personally use it to mount OneDrive in samba mount to present my scanner with share to which it can upload to OneDrive.

... but why is this not in the OpenWrt main?

because the developer hasn't submitted it to openwrt/packages. That's how it works for non-core packages.

From this issue in 2019 you can see he is aware that the community package repo exists https://github.com/openwrt/packages/issues/10864

So I think you should ask him why he did not do this. He seems to have a forum account too so @ElonH should send him a notification about this thread

You can also submit the package yourself if you can become its maintainer (i.e. update the links in OpenWrt to point to a newer release)

@ElonH pretty please with a cherry on top?

Or some other kind soul with the skills?

Right! And having to constantly download SDK and rebuild for each snapshot is a little time consuming.

Rclone feels like a staple utility that ought to be a package that is readily available for the average Joe who lacks SDK skills.

I've cleaned up the Makefiles and created a branch for PR:

Community maintained packages for OpenWrt. Documentation for submitting pull requests is in CONTRIBUTING.md

Does anyone know how to address it? Any suggestion is appreciated.

Thank you so much Sir for your actions.

Thanks, I'm glad to you interest in my repo.

I have moved the repo to https://github.com/immortalwrt/Rclone-OpenWrt maintained by ImmortalWrt Team (Of course, I'm one of them).
This repo is old(1.52) but stable.

Because of the complexity and time in using the SDK I have only ever used the main rclone package. I have had no stability issues although the guys in the rclone forum advised upgrading to a later version because of its age for what I wanted to do (mount OneDrive). But nevertheless it has always worked flawlessly for my use case. If it were easy to try I would also try out the LuCi packages.

Here is the script I use:

This mounts the OneDrive onto a samba share so that my scanner, which can only send to LAN shares, can send PDFs, which then get uploaded to OneDrive. All in the router RAM. Works well for me.

I've opened a PR to openwrt/packages:

Excellent - great work! Thank you. I think this is a great addition to OpenWrt. I'm surprised it hasn't been done earlier. Perhaps people don't know what rclone can do.

I would be happy to test for latest snapshot on RT3200 but I'm clueless as to how to build package from the new source. Normally I just add @ElonH's source into custom feeds in the SDK and then compile package from that.

You may download the prebuilt binaries from GitHub Actions directly

What about for MediaTek MT7622B?

Techdata: Belkin RT3200 Usage ~~hideseceditbutton~~ * IMPORTANT : Edit this page only via the LEFT edit button below the dataentry box * After editing, please enter a short summary of your edit: * Which field has been changed? (e.g....

Will do! Do you use rclone too then? It's great.

To be honest, it's been a long time since I last used it, also for @ElonH.
We mainly maintain this package for our friends and users.

@1715173329 @ElonH had /etc/rclone/rclone.conf the main location for the config file. Shouldn't we include that here too?

Include?
What do you mean about "include"?
In the 1.52, I have hacked the rclone default conf file path as /etc/rclone/rclone.conf. And this path is used in luci

Yes, sorry, that is what I meant. Shouldn't the rclone default conf file in 1.56 also be set to /etc/rclone/rclone.conf?

Also what is the purpose of the rclone service file in /etc/init.d?

Also what is the purpose of the rclone service file in /etc/init.d?

This is for webui, and you may notice there're 2 packages called rclone-webui-react and rclone-ng.
So you can manage files via them.

Aria2 in OpenWrt does the same thing.

Shouldn't the rclone default conf file in 1.56 also be set to /etc/rclone/rclone.conf?

This hack is pointless anyway.
You won't need change the default config path for cli usage, on the other hand, when you start a service for webui, init script will pass config path to rclone.