The test was done from 5 Ghz. band with a laptop (connection status shown on the device was 867 Mbps).
My Archer is working as dumb AP (no NAT, no SQM).

My fiber is 600 Mb. and testing it via wifi I could get 450 Mb. according to speed tests done. 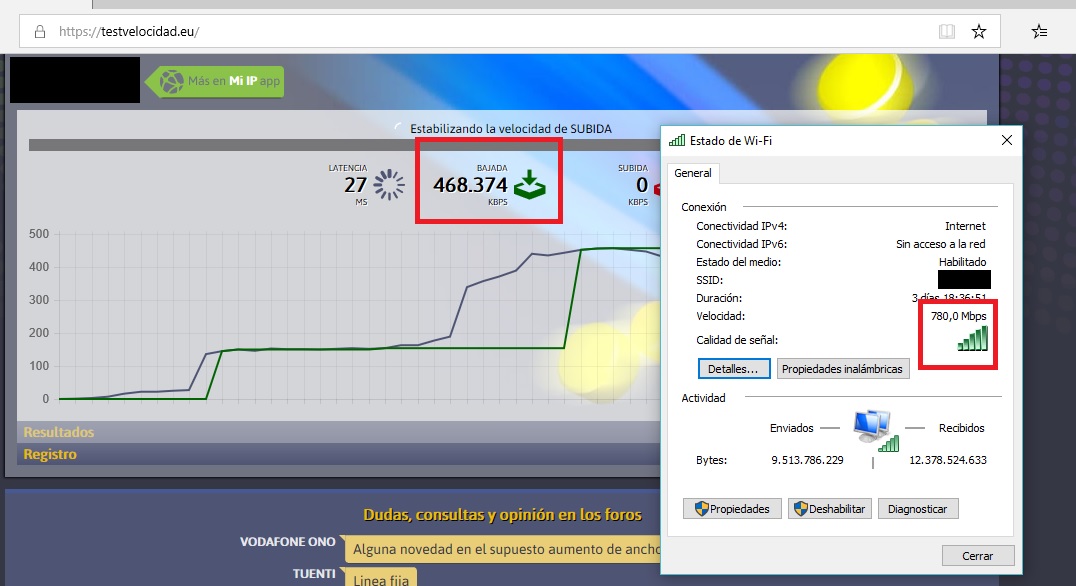 Could you check the cpu utilization of your dump ap with top over ssh while you are doing the speedtest?

@paradoxman didn't want to test it on his c7

You connect over ssh to your router (putty for windows) and execute top.
This will give you a process overview of all your running processes and is ordered by cpu usage by default.

The task that is responsible for wifi is named hostapd.
There will be two processes, one for each wifi device.

Watch to the cup usage by this process and also for the idle percentage...

Hi @paradoxman, I'm back from a trip since yesterday and I tested the wireless speed of 5ghz with the current nightly build and my laptop (I5-6300U CPU / Intel wireless AC8260). With the same setup (ch149/80hz) I get a speed of aprox. 400Mbit. CPU usage of the router is aprox 70% during the test. Afterwards I tested with my S8+ several times and it's 300mbits max. Strange thing is that the same mobile phone reaches 450mbits with the router from the internet provider (HGU Movistar) which Im using as AP.
Sorry for the confusion.

Hi @osca and thanks for your confirmation, I got similar results, a CPU load of approx. 74% so I think it's not the CPU that it's the bottleneck at this speed of 300 mbps (although it says it's connected at 866 mbps); indeed, everywhere on the internet where I saw good speedtests of the S8 were with the ISP provided routers, that's why I find it strange why a customized build like this would limit it's speed only to 300 mbps and with the ISP router to hit the 450-500 limit with the same phone hardware, what does these ISP routers have extra special? have you tried a speedtest directly from this other router and your laptop? is there much difference between that one and the archer C7? does that router have only 2x2 MIMO streams? Is it WAVE2 compatible as of having MU-MIMO implemented? the phone has all these capabilities which we should make use of, together with a non-standard implementation of 1024-QAM that Broadcom defines as a proprietary "Nitro-QAM"

The router I'm using as AP behind the archer c7 has 3x3 MIMO. It's a MitraStar_GPT-2541GNAC . If the only device connected to this router is the S8 (single user) it reaches 430-450mbits. Question is why the same mobile does not get the same speed with the archer c7 and the current build. The C7 is also with 3 antennas for 5GHZ and with modern Laptops I verified that it's also capable of 450mbits...

The count of antenna doesn't corresponds to the mimo capabilities.

Hi @juppin, honestly I'm not a expert on this topic, but it was my understanding that if the number of antennas matters or not is related to the way MIMO is used. In case of spatial streams the maximum number of streams (150mbit each) is limited by the lesser of the number of antennas at the transmitter or receiver. This fits also to the 450max on the indicated router above.
Please see https://en.m.wikipedia.org/wiki/MIMO

I am trying to do a sysupgrade on my Archer C7 v2, to get a build running with kernel 4.14 (ath79 instead of ar7xx, which it is now running), and I get the following error:

My device is definitely a V2, but somehow openwrt does not think so... Are there any ways around that (besides a tftp recovery with the new image)?

Please check here https://forum.openwrt.org/t/ath79-builds-with-all-kmod-packages-through-opkg-flow-offloading/15897?, I think you should ask there.

If you have read my first post in my ath79 build thread you know what you have to do...

For first time flashing from ar71xx you have to use the force option -F.

Handling for sysupgrade has changed and the name of your device does also not mach between ar71xx and ath79.

Did you try the web interface?

On web interface you have no force option, so impossible to flash from luci.

Thanks, I missed that one. Also changed the device paths for the wifi radios and everything works fine now.

Another way to do it is using the breed boot loader flashing option.