In order to develop the Router Operating Systems, I offer to the next.

As for example I may point
all the cromole.example.org to OpenVPN_A when OpenVPN_A is connected to the point A which may connect to the point with WAN1, WAN2, and 3g modem averagely and modem when occasionally none of WAN1 WAN2 are not available, when all the TCP port 80 http://*.example.net and all the *.onion sites to tor with upper to the same point, when lower to as for example to LAN1 and yet another VPN which have to be established to another router.

Have you seen ttyd already in OpenWrt?

Strictly saying I did not find find it.
I just installed but not yet tried, It's not written as it is a part of LuCI, and I I understand not integrated with other GUI environment.

I offer to the next.

Are you offering to develop all of these? If not, what are you actually offering?

Yes, I actually offer to gather forces to perhaps crew some team and to implement it all together. Just it a picture example from ALSA Modular Synthesizer (ams) from Ubuntu. (I just moved some units, on picture.) Nearly the same written on CSound, the most advanced modular synthesiser, would be looking too ugly. Why the components of router with all the systems and subsystems must be looking as hellish lists of configuration options not a picture of connections may not be looking as the scheme of connections? 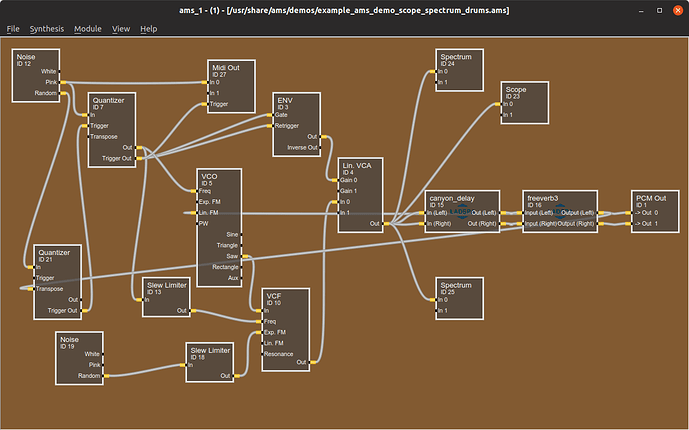 Yes, I actually offer to gather forces to perhaps crew some team [...]

My two cents: unless you take the lead, this is not going to happen, you cannot just gather forces and tell others what to do, you need to start working on those ideas yourself.

Actually It's not the first time when I do this trick.
When I need some improvement, I publish manifesto. And after some while
As for example basic ideas of Wayland interface I invented in early 2000th, I published some basic ideas and after briefed them and published.
It nearly always comes then somebody says he or she invented that, and implements, that.
Actually, one of the Security Service of Ukraine chief anticipated any of my works, along decades. And they did all possible to make troubles for me. And he died with symptoms very resembling poisoning with innovative chemical which I described to him, and on supercomputer for which I worked as adviser. (Not shadow part of the project took two Nobel prices, when he got ill.) It very much demoralized them for a while. It seams they return to their usual practice.
That's why I may not work on all of that in my list.

Ok, I see you have everything under control; my best wishes for your endeavour!

Shell I understand it as sarcasm. But I do not have everything.
It's not about me, but about it would be really better to install variety of Router features connecting them as units.

but about it would be really better to install variety of Router features connecting them as units.

I think Homenet Control Protocol (HNCP) should allow what you called "stacking of IP addresses", but I don't use it myself since I want more control over my IP address space. Though I use babeld to distribute routes between my routers, which is also used in Homenet. And I would like to see a better integration of babeld in OpenWrt, currently netifd isn't aware of the dynamic routes which can cause it to insert odd host routes when using tunneling protocols such as gre and wireguard.