Hi folks,
I have a GL-AR750 with two radios (2.4GHz and 5GHz) and I connect each of these radios to a separate wifi as client. I also create two Master wifis on each radio (locked to the channel of corresponding client wifi). Now I need each master wifi to route its packages through the client wifi on its own radio, but looking at my external internet IP, having connected to each wifi, results in the same address. That is, I don't seem to able to completely isolate these networks and one of my client wifis does not pass through any traffic. At some point, I used mwan3 to load-balance the traffic between the two wifis, and then I would see my traffic going through them in a round-robin fashion but it wasn't very stable so I ditched mwan3. I don't want to perform any load balancing now, I just want to have two completely separate networks. That is wlan0-1 routing through wlan0 and wlan1-1 routing through wlan1. 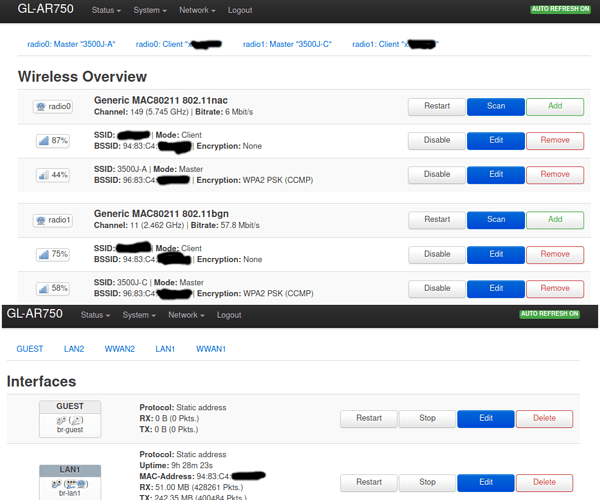 Well I can think if a few ways to do it... but I guess I would lean towards this:

Create two vlans on your switch, each on a separate subnet (static IP), then an interface for each one, and attach each wifi to each of the two interfaces, then use your firewall to direct the flow...

Thanks @adamess
I actually want to follow your proposed approach (refer to the attached image). I deleted the default LAN and WAN interfaces, created LAN1 and LAN2 which bridged are over eth1.1+3500J-A and eth1.2+3500J-C, respectively, with static IPs and set up the switch and added a new VLAN (although to be fair I'm not sure about this VLAN part.) The two wifi clients are associated with WWAN1 and WWAN2 interfaces. In the firewall section, I've forwarded fwlan1 to fwwan1, and fwlan2 to fwwan2 (these are the zones I've created for each interface), but this is to no avail and going to http://whatismyip.akamai.com still shows the same external IP when connected to either 3500J-A or 3500J-C.