Ethernet cuts out on Linksys EA6350v3

I'm using a Linksys EA6350v3 and every so often, usually multiple times a day, ethernet seems to stop working, including the WAN port. I am still able to connect via wifi, and I usually just reboot it to temporarily solve the issue. Where should I look to figure out what's happening? I'm currently running SNAPSHOT r10263-bc47285cb3 but this has been happening for a while now since I bought this router.

logread or the system logs in LuCI.

I've checked the logs after two instances of this happening and it's pretty much completely silent around when it happens. The only thing I see is the authentication stuff from when I ssh in from my laptop.

The only thing I see is the authentication stuff from when I ssh in from my laptop.

OK...but did you run the logread command after the authentication stuff???

I don't understand what you're asking. The router becomes inaccessible from ethernet, so whenever this happens I have to power up my laptop and ssh in through wifi. I'm saying that there is nothing there in the logs aside from the IP address being assigned to my laptop and the secure shell authentication stuff. If what was going wrong was logged, I would find it before that stuff, but there's simply nothing there.

On the off-chance that it’s switch related, what’s that config? ipq40xx are a little tweaky compared to others. 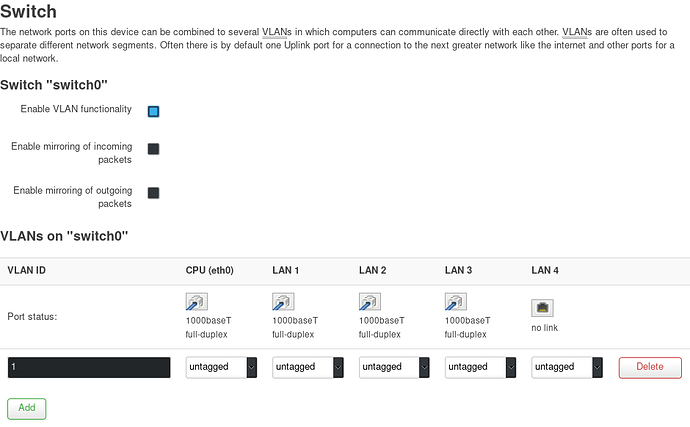 Nothing surprising there, but worth the check.

Oh, actually, I'll take a screenshot of that page again whenever the issue occurs again. Maybe there'll be a difference then.

edit: it happened again. no difference when I checked the page.

I installed Openwrt recently on the EA6350v3, and encountered this same issue.
The WAN and LAN ports are handled by the same ethernet controller on this device.
If you pump too much data through the controller it locks up.
I was only able to trigger this with a hardwired device, wifi doesn't appear to run enough bandwidth to trigger the bug.

It seems to be similar to the issue plaguing rk3328/rk3399 ethernet controllers, where heavy load causes the ethernet controller to lock up.
On the rockchips, if you send too much data through the controller with tx coe offloading enabled, the buffers get overloaded and the controller crashes.
Unfortunately disabling offloading on the ea6350 only raises the threshold for the bug to trigger.
I was unable to fully diagnose the issue, before being forced to return to stock firmware.

This seems related to the issues people have with certain websites not working correctly, which can be mitigated by lowering the MTU.
I found references of a new ethernet driver being developed by @blogic, but I cannot find the actual driver.

Mainline linux does not have a driver for this ethernet controller.

I'm also experiencing this. My parents gigabit internet will cause the ethernet switch to stop working after most internet speed tests are run. Can still connect to the router over wifi with nothing shown in the logs, a reboot brings it back up.

I've read that the current driver is essedma and possibly in the future this will switch to DSA qca8k? I'm brand new to OpenWRT, is there any hope of this being fixed or should I look into getting another router?

fwiw, perhaps try @NoTengoBattery 's latest snapshot to see if there is any difference?
https://forum.openwrt.org/t/optimized-nas-latency-memory-build-for-linksys-ea6350v3-civic/44125

I should have added, I started with release version of 19.07, then the latest snapshot and @NoTengoBattery latest build, all with settings reset (just installing Luci in the snapshot). They all had the same issue eventually.

It does not occur every time, and going by gut feeling it seems like the later builds required more runs of the speedtest before failing but that's just a hunch. The speed tests generally failed showing >500Mbps on screen at the time.

I have flashed stock 19.07 back on. I hooked up the EA6350 WAN port to my existing LAN switch. I then attached a computer to the EA6350 LAN as iperf3 client and on my real LAN had a machine as iperf3 server.

Does this testing make sense? I would assume it should be close to the speed tests that caused the switch to stop working at my parents. ~870 Mbits/sec and ~940 in reverse mode.

I could not manage to make the switch stop working.

Maybe install collectd statistics? Might get lucky and capture a trend on memory or processor usage that is helpful - or it just tells you you crashed again.

I've run a few iperf tests on my EA6350v3 running snapshot r11735 that pushed its wired speed near Gigabit without issues, but my current ISP is too slow to challenge WAN throughput.

Every year or so I swap back and forth from 40/2 bonded VDSL2 and 200/10 cable to keep the introductory rate. Our connected, streaming, VOIP family is hard pressed to notice a slowdown on 40/2 with CAKE SQM/QoS. We're currently on 40/2.

Parents have IPv6, this test no IPv6

As a simple test, have you considered disabling IPv6 by deleting WAN6 interface, assuming your parents have IPv4 ?

Thanks for the help! Since my home does not have IPv6, I assigned a prefix to the WAN of my real router and with the same iperf set up as before now using IPv6... it crashes!

I was logged in with SSH reading the logs and here they are:

This run iperf3 client "error - unable to write to stream socket: Broken pipe", the link seemed to restore and when I tried again at [467.147594] the switch stayed down:

I have reset the router to defaults and only changed the WAN IPv6 prefix length and during the failures many error lines are in logs like posts above.

With both 2.4GHz and 5GHz enabled it seems to fail so you can still connect to Luci over WiFi but with no errors in logs (like I experienced at parents).

WiFi status could be random and mean nothing but hoping the logs can help.

So would deleting the WAN6 interface be a temporarily fix for this issue?

You may wish to raise a bug report with your findings.
https://bugs.openwrt.org/