All I know is how to use the UI but no CMD stuff.

I have a Xiaomi Mi Router Pro with OpenWRT installed everything I need fine but when I share a USB drive through SMB I cant access it although Guest is allowed. It always asks for user/psswrd. I have no users/passwords set on OpenWRT. I also noticed that MiniDLNA doesnt detect any media from the device. I read somewhere that it's a drive permissions problem but I have no idea how to solve that.

How can I use SMB with no password protection. In short, everyone can access/read/write...?

How can I use SMB with no password protection. In short, everyone can access/read/write...?

What Filesystem did you format the USB drive?

I'm using NTFS. The drive is detected and I can see the files in SSH

Yeah NTFS is not well supported via SMB on openwrt, mainly the issue you did run into. If you can, try plain old FAT16/32 first and if it solves the issue, you can either try ExFAT (needs the kmod-fs-exfat kernel module from the software repository) or just format it to ext4 via PartitionWizard Portable , depending on if you need the ability to remove the drive and have it work directly on windows.

PS: The F2FS is also an option, which is optimized for flash drives/ssd's, also needs the kmod-fs-f2fs kernel module.

I changed the FS to exFAT and FAT32 and the exact same issue. I think it's a drive permissions issue. I read something similar and the issue was resolved by creating a new user and assigning the drive to them somehow.

I dont know how to do it since I'm not a CLI user.

Could you please help me with the commands

I think it's a drive permissions issue. I read something similar and the issue was resolved by creating a new user and assigning the drive to them somehow.

That should not be necessary, btw what samba version are you using? I can only speak about the samba4 package, which should work out of the box with guest access. If not there is also a "force root" option per share, that should solve any remaining access issues.

PS: If samba4 is too big, you can try ksmbd as a replacement. Sorry i have not used the old samba3 package in years, so no clue what might be the issue there.

I have managed to solve the drive permission issues (now miniDLNA reads the drive and shows media files on my TV) and installed Samba 4 and boy! getting Windows to show the shared folder is a massive headache. Configured everything as follow yet not able to (or dont know how to) access it on Windows 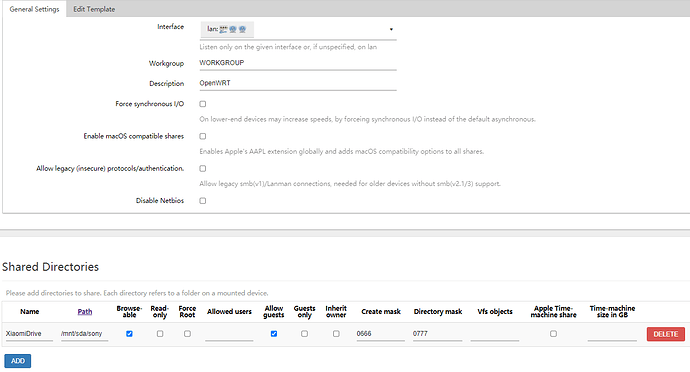 boy! getting Windows to show the shared folder is a massive headache

Sorry did forget to mention, you need to install the wsdd2 package so shared folders show up in windows.

PS: Also your smb termplate file looks like a old Samba3 file, try use the default samba4 template, the defaults should work fine.

Thanks. I had to soft reset and started from scratch since everything became a mess. Now I got everything working and I can see the drive on Windows. But soon hit the next bump! For some reason I cant "smoothly" write to the drive (tried 2 drives exFAT) Windows starts writing to the drive and creates a file but gets stuck and doesnt complete copying, mainly on large files. Sometimes it does finish copying though! I'm not sure where is this problem coming from. Sometimes it straight away hangs at 0% while I can see the activity LED on the drive flashing and data is getting actually written to the drive but apparently Windows isn't aware of that and after sometime it times out (always stuck at 0%) and I end up with some amount of the file written toi the drive but corrupted since the file wasn't completely transferred.