Does this graph mean that the CPU usage is high? 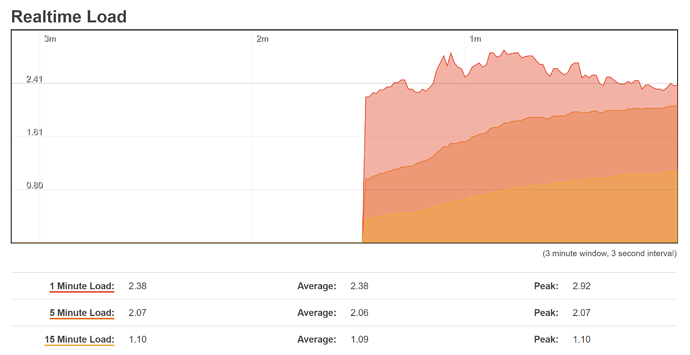 I am not sure what it means. It is not as intuitive as the graph of Windows Task Manager. Does this mean that the network performance is bottlenecked by the CPU?

For example I have load 100% on Windows, how many cores I need to have a reasonable load percent? Hmm no way of knowing on Windows. In Linux my load is 1.4 well that means if I had 2 cores that would have been enough. If load was 3.2 then I would have needed 4 cores to satisfy it. (although I expect this does not go quite linearly).

Any load above 1 is over 100% for a single core system. Read this: https://scoutapm.com/blog/understanding-load-averages

Running LuCI "actively" and real-time graphs is a significant load on a slower, single-core MIPS processors. You may or may not have any problems with CPU power for routing, depending on your bandwidth and what you're doing with the traffic, if anything.

The numbers are Linux "load average." The exact interpretation of it is the subject of controversy, but it is generally accepted that over 1.0 on a single-core CPU is heavily loaded.

Running top on the command line is a more accurate number because as noted, LUCI itself will use a lot of CPU.