DNSmasq: How to configure dns without dhcp?

The gateway from the ISP does not let me configure DNS.
I need some dns entries in order to provide local access IPs to some hostnames in my TLD that are inside my home.

I would like the gateway from my ISP to continue providing the DHCP service (in order to continue having service and internet access when the other router is down).
But if I deactivate DHCP server in the router with openwrt (192.168.2.253) I won't get DNS

Is there anyway to deactivate DHCP service in openwrt but still resolve DNS queries (does from hostnames introduced manually)?

I this is not possible, I will stablish the openwrt router as the DHCP server (as I have it now).

It work, but it has two problems:
1.- all hosts in network will send its outgoing packages to 192.168.2.253 and the openwrt from there to 192.168.2.254, which is one more hop than neccesary, as the ISP gateway is the unique with direct access to internet.
2.- If the openwrt router is down no one has access to internet, as they try to send packets throw it.
But the net is still up and working throw the gateway, as it is functional.

Any way to make DHCP sends another IP address as the gateway and not its own IP address?

This is a little murky.

I'm surprised the your ISP router does not support changing DNS.

You should try disabling dnsmasq in openwrt.... then rebooting both routers..... have you called the ISP / looked at their docs / manuals?

You either have to work at understanding the abilities of your core router or redefine a solution because alot of what you say is down to the core router and not openwrt.

You can't have 2 DHCP servers anyways.

Is there anyway to deactivate DHCP service in openwrt but still resolve DNS queries (does from hostnames introduced manually)?

One option is to to statically assign the DNS servers you desire on all clients.

I this is not possible, I will stablish the openwrt router as the DHCP server (as I have it now).

You can use OpenWrt as the DHCP server, assign the DNSes via DHCP Option 6, and hand out the alternate gateway of your ISP's router. This will also work!

No. As I noted, you can hand out your other gateway in DHCP replies.

2.- If the openwrt router is down no one has access to internet, as they try to send packets throw it.

Not if you assign the ISP router as your gateway. BTW, a gateway assignment is DHCP Option 3.

Let me try to clarify a bit the situation

Most of ISP providers, here in Spain, for home internet access, don't provide you more than basic access to the router.
And if you are not an enterprise you cannot hire products for enterprises (which are probably more expensive).

No, yo cannot change anything in the ISP router about DNS, you can just activate DHCP server or not, and configure the DNS, gateway etc.
That is why I am using DNS and DHCP in my other router (and to get access to wifi and provide more lan ports in the other side of the house).

As the ISP router is the only one that is imprescindible to have basic internet access, I would prefer to serve DHCP from it. So if the second router is down, I may get not access to some services and from some PCs, but others PCs, tablets, etc would have internet access yet.

Now I have configured the openwrt router (192.168.2.253) as DHCP server and as primary DNS server (the other as secondary server).
It is configured in DHCP and every PC gets that DNS setting correctly.

These are the interface settings of the openwrt router 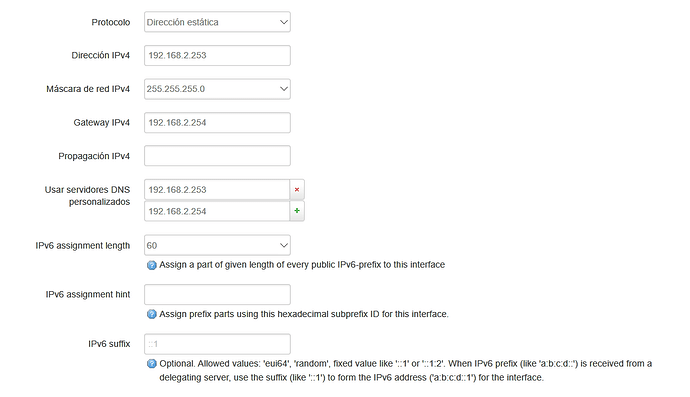 And these the DHCP configuration 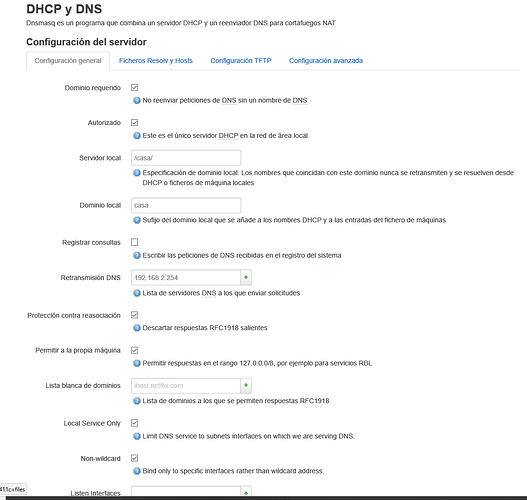 As I have said I would Prefer the ISP router to be the DHCP server.

But If I deactivate DHCP for the openwrt router (in order to not provide DHCP but provide DNS solving) the openWRT router does not solve any DNS queries, even if I have configured some hostname entries.

How may I get it to resolve DNS without providing DHCP?

yo cannot change anything in the ISP router about DNS, you can just activate DHCP server or not, and configure the DNS

still murky..... are you trying to say that;

How may I get it to resolve DNS without providing DHCP?

Of course you cannot change DNS upstream in the ISP provider.

But there is no option about DNS in the user interface they provide you in the ISP router.
You can just activate dhcp, use proxy DNS (to solve local names of hosts with assigned leases), stablish the dhcp IP range, and the local domain name, not much more.
I need other things like creating some local IP entries for myser.mydoman.tld that openwrt does provide me.

You have not admin access to the router, just a cropeed down access, and no ssh access.
Beleive it or not, it is like this in many providers here, and even the ones that let you more advance access won't let you make DNS entries or change the firmware in the router.

These are the options: 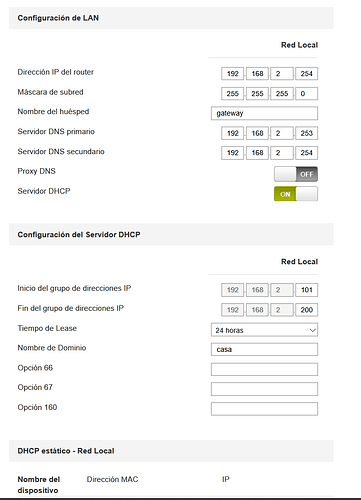 I have found this in documentation.

Is this the way to go to have just DNS installed with no DHCP?

Would bound forward queries of hostnames in a zone configured in it to internet if it does not find them in its config?

Or is unbound more suitable for that?
https://openwrt.org/docs/guide-user/services/dns/unbound

I don't know why when I checked "deactivate interface" first time it did not work.

But I have tried again, and now it works.

The ISP DHC server does not let you configure the name entry in the lease, so you cannot stablish the names centrally.

And it seems it all works.

queries to otherserver.mydomain.tld (not registered locally) are forwared to internet and solved correctly to the corresponding IP.

So everything seems to work correctly.