Difference between DSA and driver-level VLANs in the context of RPi4 (no switch)?

What is the difference (if any) between using Bridge VLAN filter/DSA to setup VLAN tagging and creating a driver-level VLAN in the context of a device without a switch like a RPi4?

My setup is using the RPi4 as the router/firewall with VLAN tagging with a separate dumb AP. Goal is isolation between the VLANs.

For more context, here is the network config on the RPi4 router/firewall:

I suspect there is little difference from a usability perspective. However, the config for a driver VLAN is substantially simpler.

How would I modify the network config to switch this over to driver VLANs?

The following should do it (although I would check the IP addresses and VLAN notations are correct). The loopback, global, and wireguard sections would remain the same.

Thank you. Is it a literal drop in/replace my existing interfaces? All other section remain as-is?

gets replaced. So you just keep the loopback interface section, globals section, and wireguard section(s).

That's most of the config... So the tagging is inferred in the 0.x stuff? I am not understanding it.

As I said, it's substantially simpler. As you've guessed, the VLAN tagging is provided by number used in the option device 'eth0.x' declaration within each interface. You don't need all the additional config bridge-vlan or config device sections.

Edit: The situation would likely be different if a hardware switch were involved and in that case it may well be that DSA provides a simpler/easier to understand config.

OK. Here is the new file based on your suggestion. Seem good?

I will give it try later this evening. Thanks for the help with it.

And visually, here is a vimdiff (original on right):

That was a fail

Nothing worked upon rebooting both devices... I simply replaced /etc/config/network with the contents above.

@richb-hanover-priv - I noticed that you authored the DSA mini tutorial on the wiki. Can you take a stab at my question:

What is the difference (if any) between using Bridge VLAN filter/DSA to setup VLAN tagging and creating a driver-level VLAN in the context of a device without a switch like a RPi4?

Hi! I know less than you do... (I only tweaked up those pages from earlier drafts that were confusing to me.) I am cc'ing @arinc9 to see if he might be able to help.

@darksky Let's start by explaining a bit of how things work.

To configure VLANs on a switch using DSA framework, you'd have to put all of the interfaces (wan, lan1, lan2, etc.) into one bridge (e.g. br0). Then, create a subinterface of the bridge interface (e.g. br0.5 which is based off of br0 and set to use VLAN ID 5) to send & receive frames with the specified VLAN. Check the Converting to DSA page I wrote for more details.

So the tagging is inferred in the 0.x stuff? I am not understanding it. 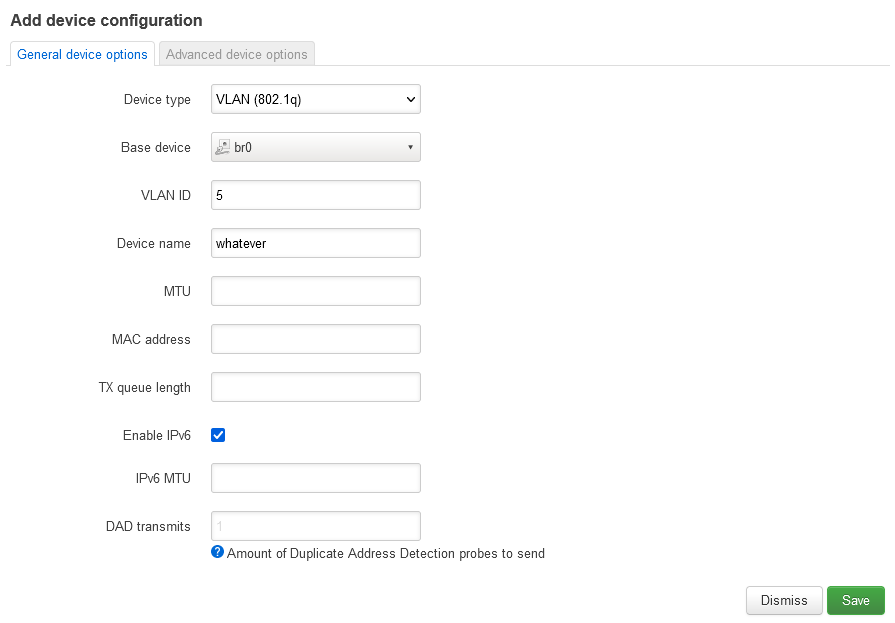 You can see VLAN and other information of the interfaces on the command line with this command: ip -d link (you need ip-full package on OpenWrt to use the "-d" option). E.g. the output of the "whatever" interface I created:

It's more convenient to name your subinterface e.g. br0.5 so you can easily figure out which interface it's based off of and what VLAN ID it uses by just looking at the name of the subinterface.

OpenWrt makes things more easier. If you just add an interface (it's incorrectly called "device" on LuCI) called br0.5 on one of the networks on the "Interfaces" page, OpenWrt will automatically create a subinterface of br0 and set the interface to use VLAN 5.

VLAN filtering needs to be enabled on the bridge. The Linux kernel will then forward frames per the VLAN configuration.

Back to your case

On devices without a switch, the ethernet port(s) - mostly singular - is directly connected to the CPU. Therefore the interface of the ethernet port is usually called something like eth0, eth1, etc. You don't use DSA to initialise these ports in this case.

You only have one port so you don't need to put it under a bridge (if you don't want to include wireless interfaces on the VLANs. If you intend to, the wiki page I linked above should keep you covered).

Let's say you have 3 networks. On "Interfaces" page, for the first network, specify the interface as eth0.10.
For the second, specify eth0.20. For the third eth0.30.

And then you can set up the router to route between these networks.

I hope this was inclusive enough. Let me know if you have any questions.

Thank you very much for the detailed reply. So DSA for my is not needed, although it is working. I will try reconfiguring as you said as I have time and update the thread. Thank you.

I think I got it working. The difficult part was figuring out the LXC I'm running.

Note that if I didn't create br-lxc.4 and if I tried using a macvlan device, when I reboot my dumb AP, the contain's interface would mysteriously but consistently go down. I would then need to restart the lxc which is not optimal. So that bridge was my solution. Bug maybe. The bridge is more robust.

I did a slight edit to correct misinformation about how VLAN filtering works in Linux and how DSA comes into play, please read it. Also, because of your situation with LXC, you should put the eth0 into bridge (e.g. br0) and configure VLAN filtering there. Here is an example according to your set up: 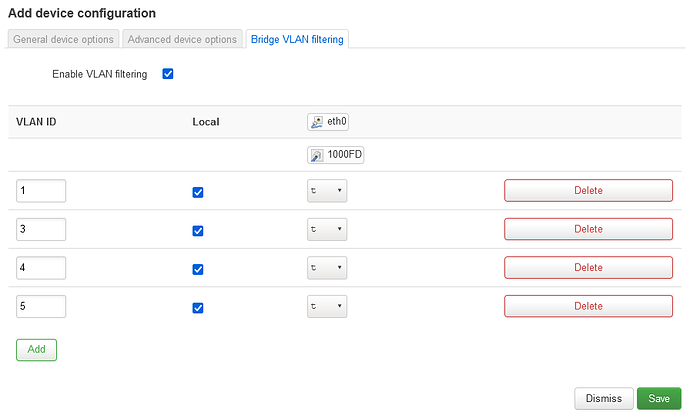 You can simply attach any wireless interfaces to any of the networks this way. For example, if you attach one to the network using br0.5, it will be in the bridge and in the specified VLAN.

Also, because of your situation with LXC, you should put the eth0 into bridge (e.g. br0) and configure VLAN filtering there.

That is similar to my original setup. What is wrong with my current one? Why pull Bridge VLAN filtering into the mix again?

I think your current setup will work, I just don't find it as a proper solution. Either do VLAN filtering for eth0 on the bridge interface or do it as subinterfaces of eth0.

I made the changes to /etc/config/network to use VLAN filtering on eth0/bridging setup. But I am unable to start the container.

Either do VLAN filtering for eth0 on the bridge interface or do it as subinterfaces of eth0.

The other option you mentioned might be appealing, but what configuration in LXC would you recommend to do so?

Ok, now I see what you're trying to do. Change interface name of lxc to anything but br0 & eth0 (to avoid confusion), for example: lxc.net.0.link = lxc

Add lxc interface to the bridge and set up VLAN 4 tagged for this interface. Use br0.4 on the network configuration at the Interfaces page.

This way, anything at VLAN 4 connecting to your Pi (over eth0) and your router itself can reach lxc.

Can you tell what do you use lxc for?
Do you need it to be in the same VLAN as something connecting to your Pi? Or do you just need to route to lxc?