I am using OpenWrt 21.02 and trying to assign IPv6 addresses from a /64 prefix provided by the ISP to devices on the LAN.

My ISP device happens to be a portable Android-based LTE hotspot device that is plugged into the router's USB port, so it behaves very similar to an Android phone with USB tethering turned on. An Android device doesn't support DHCPv6 or PD, and it announces the /64 prefix directly in the RA.

Below is a screenshot of the RA captured by Wireshark when the device is plugged into a PC's USB port: 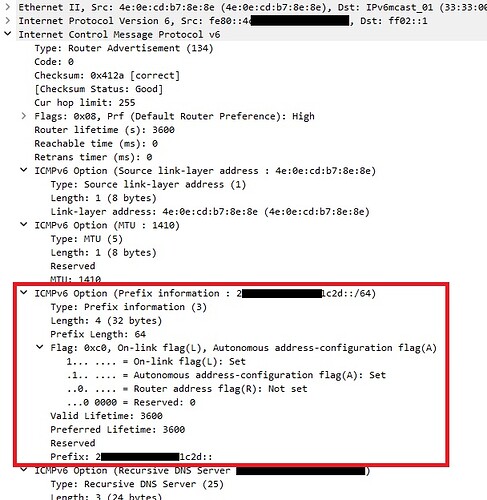 What I aim to do:

Use DHCPv6 to have more control over how the /64 prefix is utilised downstream and do stuff like:

I further dug into how DHCPv6 works in OpenWrt and found that odhcp6c obtains information from the WAN IPv6 interface and calls the script /lib/netifd/dhcpv6.script with the obtained information in environment variables and the action performed in the arguments.

I created the custom script /etc/odhcp6c.user that prints the output of set to a file so that I could see what is happening under the hood.

I searched through OpenWrt's commit history and found 2 commits (at the time of writing) related to this.

An option called extendprefix seems to be introduced in this commit that is setting the $EXTENDPREFIX variable to 1. This option is not documented in the wiki for IPv6 configuration.

I changed my network.usb6 configuration to include network.usb6.extendprefix='1' and set dhcp.lan.dhcpv6 and dhcp.lan.ra back to 'server', and now it works!

I believe this missing option should be added to the wiki.

Another heads-up for anyone trying to achieve a similar configuration with an upstream /64 prefix from the ISP's router:

Most likely in such a configuration, the ndp relay must be active for internet to work, otherwise you'll get Request timed out errors for all traffic going out of your prefix

This is essential for the neighbour discovery messages to pass between the WAN interface and LAN so that when a packet is routed towards the ISP device from the internet, it can be routed to the device on the LAN which has the address from the /64 prefix, else it is dropped.