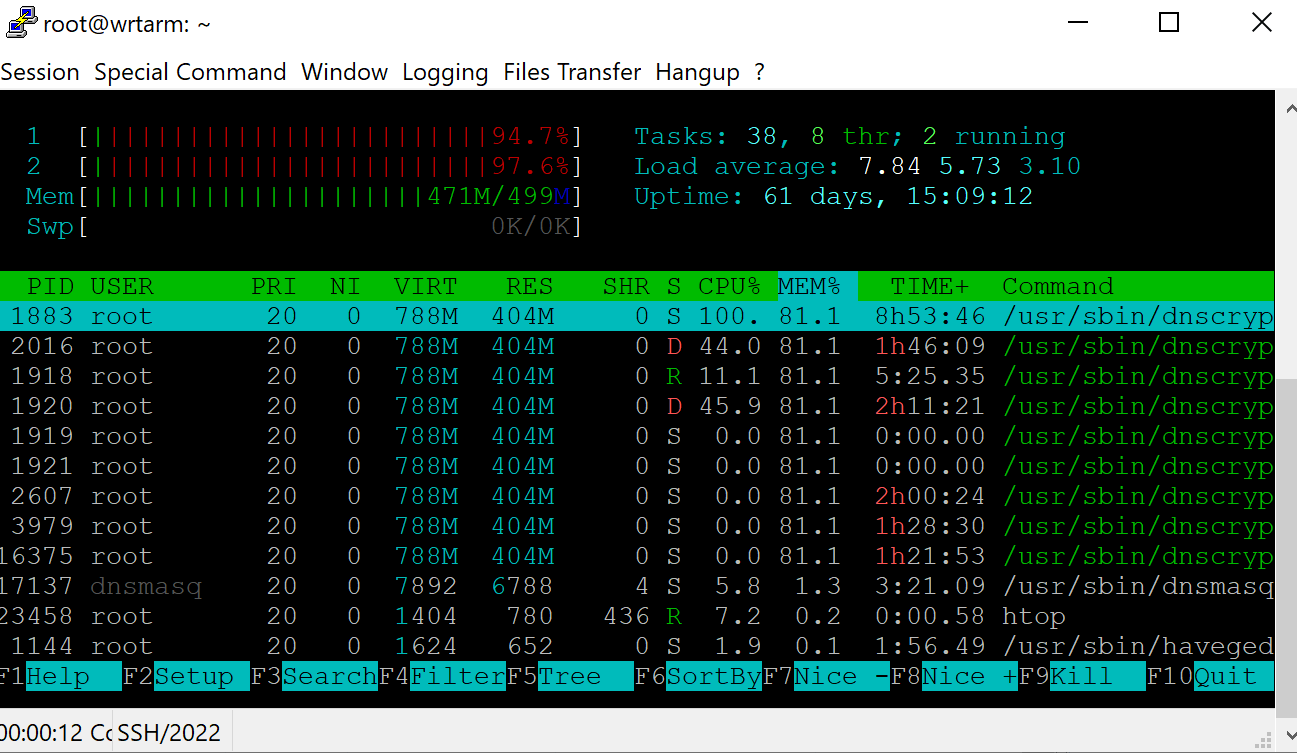 Suddenly internet was not working anymore, I connected to the router, noticed this. 2 minutes later the router crashed / was not answering anymore.

Interesting. Ya Made Me Look

FWIW. I’ve been doing quite a bit of experimenting/tweaking?/etc with latest build so I can only rely on the last 4 days of uptime data for consistency.

I started using OpenWrt (R12570 Build) the end of March, and had SNMP logging going by 2 April. First image Is from first month Of SNMP data, second is from last four days of uptime on latest R13342 Build.

It’s not apples to apples comparison, but HMMM. The only extra package I’ve added between the two builds is softflowd (doesn’t work in PROCD latest build btw).

And last image is my htop after reading your post. 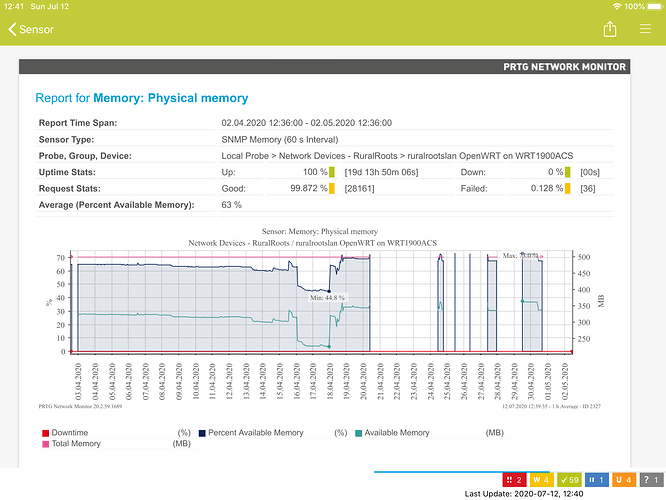 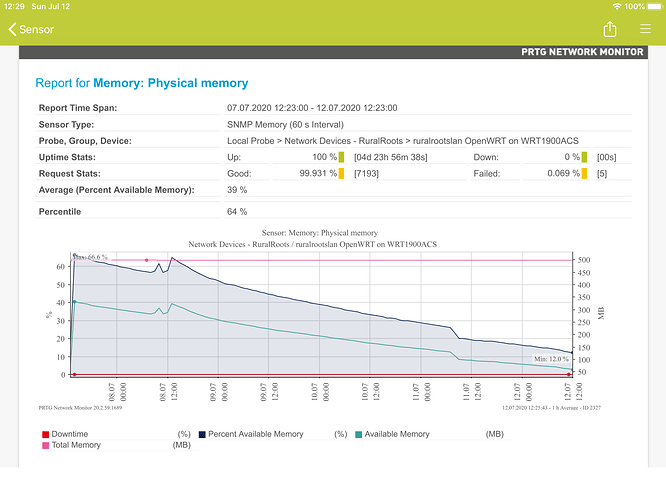 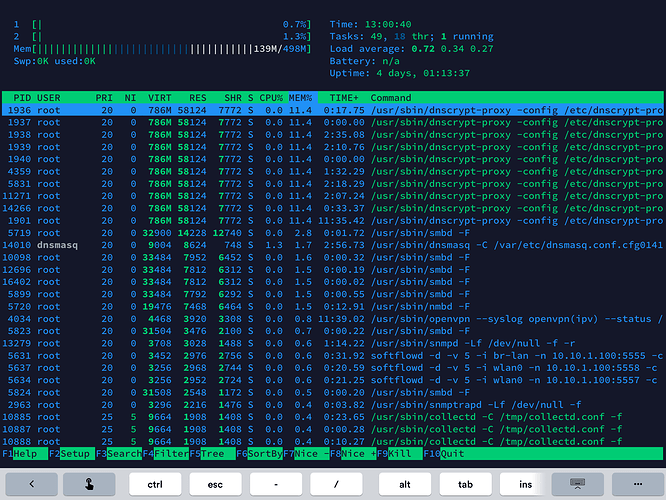 Thanks for the suggestion.. Due to tight space I can't just add additional packages.

Right now, there is no time scheduled for the next build. This is just in a holding pattern because the next build will soft brick everyone who has not already converted to DSA.

I did a little hunting on the web for a guide for changing from swconfig to DSA but haven't found anything useful. That surprises me given the direction OpenWrt is taking with converting to DSA. Did I not hunt well enough....or in other words, is there a guide somewhere on how to convert to DSA?

Did someone notice, when building with debug output on, a warning is printed, something like NF_NAT_REDIRECT=m is invalid...
Maybe that is the cause that for some people redirects don't work?

And with LSM lockdown enabled the build fails:

I read up on how to harden the kernel.
Some guides suggest to disable the /dev/port device.
Someone knows what this is used for? Doing a cat /dev/port crashes the device...

Also how to enable gcc plugins in the openwrt toolchain?

someone else has this problem that is described here:
https://bugzilla.redhat.com/show_bug.cgi?id=1813691
?

Hmm.... How about one-time startup script to fix all then reboot?
I can help to write it, if you want.

As great as that sounds, there can be issues as not everyone is running their network the same.

Wonder how Turris dealt with this when they moved from switch to DSA.

That script that does not really convert 802.1Q tag management to DSA (bridge v command) but instead creates unnecessary virtual kernel managed interfaces on top of the switch's DSA ports.

Ah right, so guess a script would need to be made by scratch.

Indeed, there is no intention for such by TOS and as pointed out earlier in this thread for OpenWrt

If you are looking for a proper migration/conversion script from swconfig to DSA the chances seem slim https://github.com/openwrt/openwrt/pull/3074

A migration script is an unobtanium.If it wasn't, it would have materialised already; there certainly has been enough successfully attempted failures.

sorry but it's years that devs wait for someone to make a script that can port switch configuration to DSA, it is not going to happen.
We will have to put strong warnings in next OpenWrt release so people know they will need to deal with this, but there is really no point in stopping this in master.

Is this the preferred builds for linksys wrt routers?
I went to the dc502wrt.org site, but I can't seem to see the functionalities diffs with openwrt official builds.
Could someone kindly show a short summary of the functionality diffs? The UI seems better, that's the only thing I know. Thanks.

No this is not preferred. It includes packages the official does not. Yes, the UI is one of them, but there are many more. Everything you see under "Services" would not be included either, but there are others.

However, if you have a list of your own preferred packages you could install them yourself from the official build.

Thanks for the reply David.
Is your latest build in sync with openwrt's latest (19.x)?
I would love to try the UI. If added from the official build, what's the package name for your UI?
thanks,

Is your latest build in sync with openwrt's latest (19.x)?
I would love to try the UI. If added from the official build, what's the package name for your UI?

David builds from the daily Snapshot releases so yes, it is (b)leading edge which comes with the caveat of possible anomalous behaviour from build to build. On the flip side IMHO, David’s builds have been extremely stable.

The UI theme is OpenTomato.

Could someone kindly show a short summary of the functionality diffs? The UI seems better, that's the only thing I know.

LuCi Gui - Webpage to make configuration changes.
USB Packages - For mounting USB sticks or external hard drives.
Network Shares - SAMBA service that gives network file sharing capabilities.
Dynamic-DNS - allows your router to be reached with a fixed hostname while having a dynamically changing IP address.
UPnP - allows clients in the local network to automatically configure the router.
OpenVPN - VPN service to turn the router into a VPN server or client.

You can find the package build manifest here: https://dc502wrt.org/releases/openwrt-mvebu-cortexa9.manifest

Does anyone here use Softflowd - software netflow exporter on David’s latest build?

It goes into a crash loop when instantiated via procd/init.d, but works fine from CL, rc.local, and custom init script. It worked as advertised on R12570 without a hitch.

Suggestions I’ve found are basically to re-flash and reload packages, and then raise an issue on github if it persists. So, before I re-flash or raise an issue specific only to me on this build I’m wondering if anyone else has experienced the same behaviour.

Latest Kernel 5.4.52 has some mvneta commits that cause a kernel warn:

Got a Linksys WRT1900ACS running stock OpenWrt 19.07.2. Planning on upgrading to latest version but perhaps use this custom build. Is there any special considerations I should take into account? A example is that the FAQ recommend using the .img instead of the .bin - I do not have a lot of packages and out of the normal configs in my current installation.

Firstly make a backup of your current router configuration (Always best to have just incase).

Then as your upgrading OpenWRT to another build of OpenWRT you can use the sysupgrade.bin file to upgrade to a new version.

You only need to use the .img file if your flashing from Stock firmware.

I'm currently running build r13059 on a WRT1900ACS, and twice now I've ran into an issue with both the 2.4Ghz and 5GHz radios crashing after heavy load on the 5GHz network while doing a LAN backup via Veeam Windows agent to a router mounted USB hard drive. I've come across forum posts in the past of the WiFi crashing with heavy load on these Linksys routers with this custom firmware, and I'm just wondering if this is still a known issue. I'm contemplating just buying a separate wireless AP and shutting off the WiFi on my router. 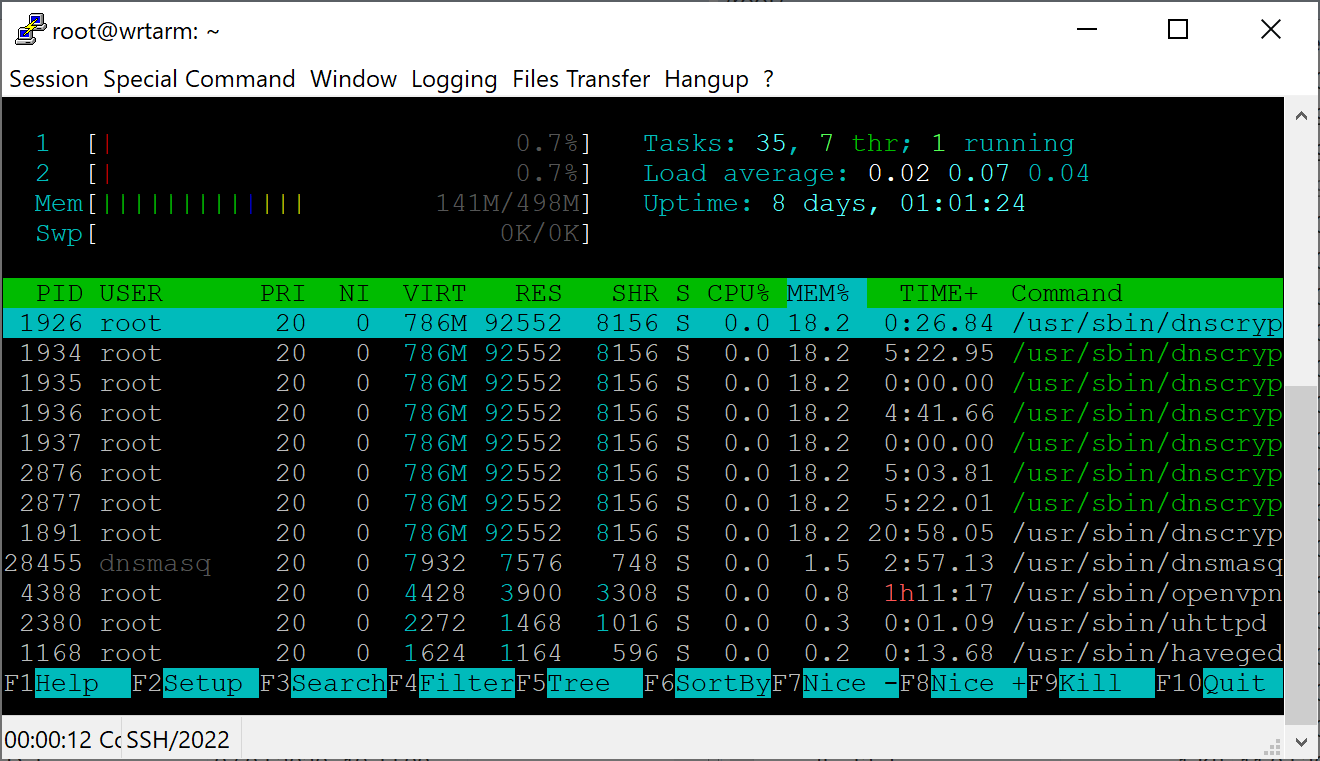 It is happening again.... is there any way you could upgrade the dnscrypt-proxy2 version @davidc502

Whats the reason there wasnt a new build since 2 months btw?