I want to setup a home network.I didn't look closely enough and I bought a D-Link DGS-1210-26 router. I found details on the -24 and the -28 variant but information on the -26 is sparse.
Does anyone know whether this variant is compatible or should I return it?

The details matter, a lot. So make sure to look at the model plate on the bottom, as well as the second plate towards the back detailing the hardware revision - and the installed firmware revision from the management interface (don't update it!).

If you want to play it safe, return it - otherwise at least pictures for the model plates (feel free to obfuscate serial numbers and MAC addresses) are needed (as it really depends on the exact details), ideally also a frontal picture of the device. 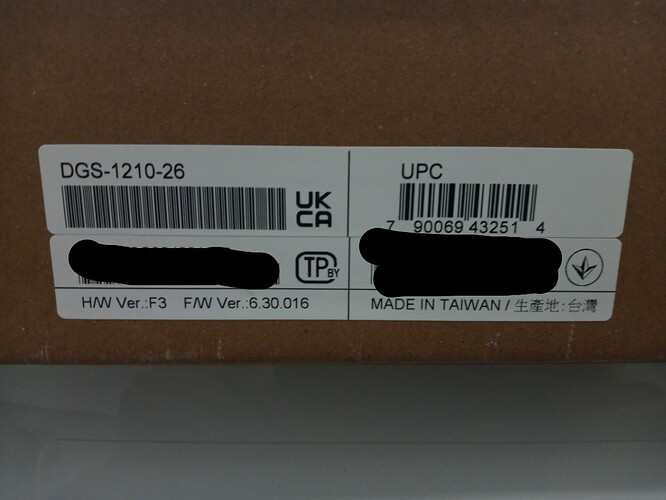 Currently not supported, but probably quite easily supported (if someone with the hardware would work on it, in practice this would mean you, yourself).

There is a catch though, it's very current and already ships with firmware v6.30.x (the same would go for revG devices with firmware 7.30.x; up to 6.20.x/ revF or 7.20.x/ revG should be fine), which is their new encrypted firmware with a new bootloader… Downgrading is said not to be possible, and that might include installing OpenWrt. Serial console access will be needed for just about anything, but even that might not be enough to circumvent their encrypted firmware and develop/ flash OpenWrt.

My advice would be to return it - and to be very specific about the exact hardware and (currently installed-) firmware version (which might have been one-way-upgraded to the encrypted version by previous owners, so the stated version on the label applies only to factory sealed devices) of your alternative replacement device.

--
v6.30.x/ revF and v7.30.x/ revG have been released in late August 2021.
The ZyXEL GS1900 series has less (very little) flash, but there is less hardware variation and so far no encryption shenanigans going on, making this an easier and safer suggestion.

Thank you very much. I appreciate your help.

I'm a programmer, so minor modifications to make this device compatible wouldn't be a problem but a locked bootloader is. I need a switch now and can't spend weeks with an uncooperative bootloader.
I will return it and pay more attention next time.