I'm following this guide to bring a connection from my house to my Goats Stable (Goats have internet rights too you know?). I was wondering if the steps in the guide work too wanting to set up a bridge with 3 points instead of just 2. Below a drawing of what I'm trying to do: 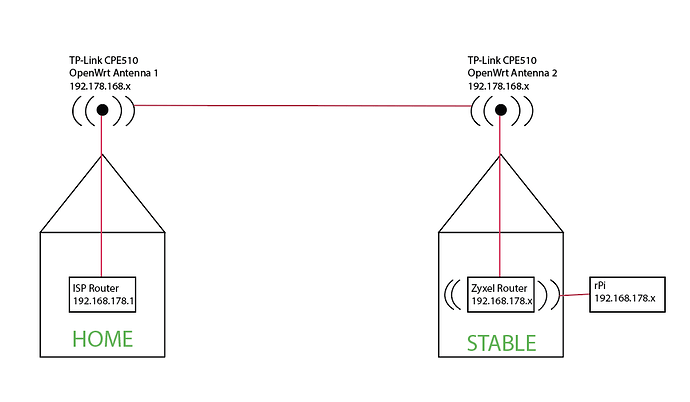 The end purpose is that all devices are in the same network and get IP addresses from the main router (the one provided by my ISP, a FritzBox! which I can't flash but has a lot of possible settings) so that I could then set up port forwarding from this main router to the rPi in the stable, as if the antennas and the router in the middle didn't even exist.

With a bridge you can have any number of devices on both sides.

Set one of the CPEs as AP(WDS) and the other as STA(WDS). Place the wifi interface in the existing lan network. Turn off the DHCP server in both, since the main router will be serving DHCP.

Conventionally the AP is at the upstream end (house) but it doesn't have to be. Setting the barn CPE as the AP side of the link would let additional non-WDS clients connect and be served from the barn.

Re-purposing a DSL modem-router with stock firmware to be a dumb AP isn't always possible but the general principle is you have to be able to disable the DHCP server. Connect one of the LAN ports to your network. The DSL modem and any auxiliary WAN port will not be used.

Niceone, I think I got it all!

I think I have options to get my end router to be dumb, I am sure at least I can turn off DHCP.

I actually tried that already but the problem was that then I was not able to connect at all, but maybe It's because the CPEs weren't configured right.

And if at that point I enable the WIFI on the router should I be able to connect to it and get an IP from the main router? and if i connect another machine to another of the LAN ports will I also get connected there!

Manymany thanks, I'll do some trials and let you know how it went

I had some problems and only now actually setting the whole thing up.

Bear with me and my very basic knowledge about this stuff, it's all quite new for me.

Could you be a bit more specific with the steps to take? Where do I set the routers as WDS, do I need to install packages to do it?

Especially what do you mean with "Place the wifi interface in the existing lan network."?

Currently this is the interface config on the upstream side (house) which is connected via lan to the ISP router (192.168.178.1): 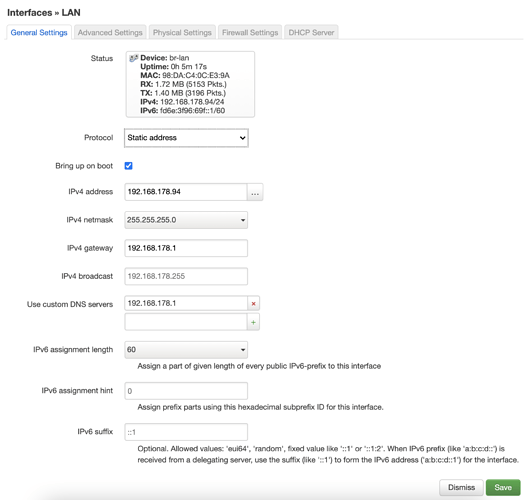 Then I added another interface "BRIDGE" imagining to tell the router "take the connection you get from your ethernet port and shoot it in the air!", but it doesn't seem to work that way...

So from that on I'm kind of stuck and I wouldn't know how to start on the "receiving" part of the network.

For this use case, everything is in one network, which we will call "lan" throughout. A single Ethernet port device defaults to having one network, a bridge named "lan."

Work from there to set up two "dumb APs", but one will be a client (still dumb) so it reaches the main network by wireless instead of the usual Ethernet. Then the Ethernet port is usable as an output to other endpoint devices.
On one end, set up a wifi Access Point (WDS). This is one of the choices in the mode box and it does not require additional software.
Configure the other one almost the same way, only set the wifi mode to Client (WDS). The SSID and encryption must match your AP. The BSSID box can be left blank.
It's a good idea to enable STP on the lan bridge so if you leave the Ethernet plugged in while testing you don't have a network loop.

I configured the house antenna on AP(WDS) and turned off DHCP. I set the ip address statically to be in the scope of the ip addresses assigned by the ISP Router.

I also created a wifi network connected to the same interface, and I can connect to that network and get internet! wohoo!

Then I configured the barn antenna exactly the same way, except that I configured the wifi network to be Client WDS. (same SSD and no encryption) and from the luci interface they seem to be connected, this is a view of the wifi config of the house antenna ("ponte" is the name of the network that is setup on both antennas)

Now, I connect via cable to the barn antenna and I expect to get an IP address from the ISP Router and navigate (right?). That doesn't happen though, and I get assigned a weird IP: 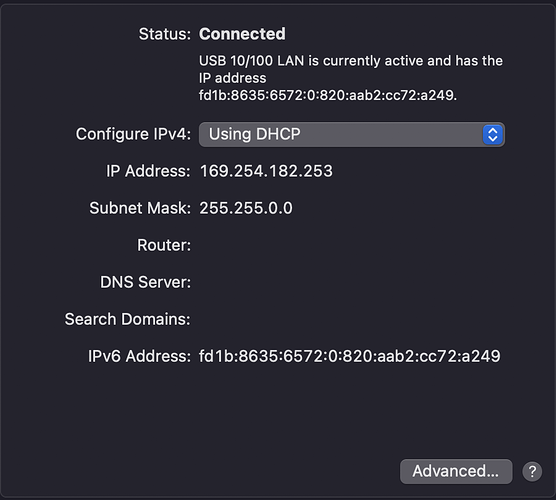 I enabled STP on both.

Am I missing a step? Any idea where to look for the bug?

The 169.254.x.x address means your DHCP client couldn't find a DHCP server, so it defaults to the IPv4 link local address.

Note the IPv6 address (which starts with FD) that is probably the easiest way to manage your OpenWrt routers, unless you configure static LAN addresses on each in the same subnet as your ISP router, but NOT in the DHCP pool range.