I have got a device which has 2 USB connectors and I would like to use one of them with an USB-ETHERNET adapter to connect on the Internet.

I have got another extra micro-USB interface but, it is not an option. This is my current 'ifconfig': 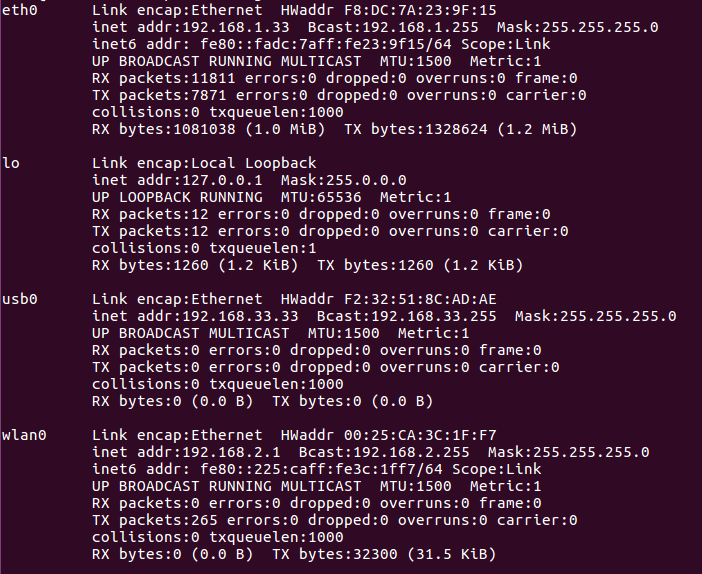 Could someone help me?

does the extra ethernet port pop up in dmesg and lsusb ?

Did you install the driver for this adapter?

When the driver is installed and the adapter plugged in, the kernel will create a port with the name "ethN" where is N is one more than the last existing one. No configuration files are necessary to create the port. Simply use 'ethN' as a network device, either directly in an interface or in a bridge.

I think so. It should have 2 ethernet ports at least and currently it is only using one of them.

I exactly thought the same and I was said to have an extra Ethernet without any configuration needed. But it does not work, it is not created any ethN interface...

What USB Ethernet adapter are you using? And to re-ask the question from earlier:

Did you install the driver for this adapter?

I have to confess that I don't know if it has been installed or not but, device's box hasn't got anything related with the drivers. I thought that they might install once I plug it at first time. I thought it would be plug&play. Should I look for this devices drivers on the Internet?

I can answer that right now.... it has not been installed,

device's box hasn't got anything related with the drivers

Even if it did, it wouldn't do you any good. Those drivers would be for Windows or Mac, maybe Linux (big distros).

I thought that they might install once I plug it at first time.

Not on OpenWrt. You need to manually install the drivers.

I thought it would be plug&play. Should I look for this devices drivers on the Internet?

You need to look at the dmsg logs to find out what usb ethernet controller chip is inside your adapter and then you need to install the drivers using the OpenWrt opkg system.

I have already solved. The drivers were installed but, the driver interface were not registered.