Hello everyone
I need some help with setting up proper VLANs on my router's switch. I’ve got a WRT1900ACS running OpenWRT as my main router and a TP-Link Archer C6 running default software set to AP mode. The C6 supports setting separate VLANs on different ports for IPTV.
I want to be able to send both standard local network (VLAN 1) and IPTV multicast (VLAN 6) through port 1 in one trunk so that I could send it via a single cable to my living room and split it again with the C6 and distribute it to the TV stb and computer.

Right now, I have different traffic isolated and coming out from different ports on my router (Internet from ports 1-3 and IPTV from port 4) and two Ethernet splitters on both ends of the ethernet cable going from the main router to the living room which results in max 100mbps speed for both Internet and IPTV instead of a possible shared 1000.

Is it possible to create a new trunk for port 1 and send it via the Ethernet cable or do I have to buy a separate managed switch to do that? Would it be possible to separate the VLANs with the second router on the other end or would I need to use a managed switch over there instead?

The IPTV works just by adding a separate VLAN 6 on the switch, I didn't need to do more configuring.
I am looking for the most rational solution for my problem. All tips are welcome!

Below is the switch configuration om my main router. 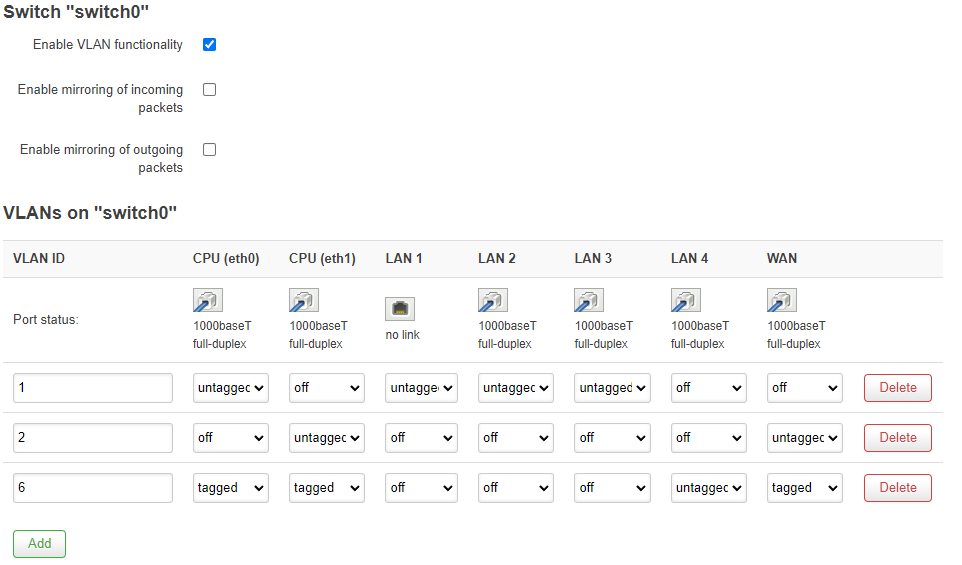 You do not need to switch TV packets into the router CPU, they're going to go directly by hardware to the trunk cable. Leave both CPU ports off in VLAN 6.

Do not try to split down to 2 pairs when the equipment on both ends is GbE. This is a configuration not supported by the standard. The connection may be able to fall back to 100 Mb but it is also likely to not work at all.

Is it possible to create another VLAN that would duplicate VLAN 1 on OpenWRT so that I could use that one for trunking and circumvent the VLAND id limitation on the secondary router? Or is there another way?

You can just change the number of the LAN VLAN in the switch (the one that is connected to eth0) on the left side to whatever you want. Since eth0 is untagged, the only place this number is used is to tag packets on the trunk cable.

I'd like to see another screenshot of the Switch page the way it is now.

Thank you very much for the help.
Now I've got both internet and TV coming out of the secondary router. The only problem is that the router must be set to router mode instead of AP but I suppose I will have to live with it. Still better than having a questionable 100mbps link.