OpenWRT only shows the channels @ 20Mhz:

But never the channels in between:

This is expected behavior and normal for all 5GHz wifi devices.

In OpenWRT, it depends on the Country Code you specifiy...

The 20 MHz list is always used. It becomes redundant if the width is wider than 20, and the standard wider band that includes the specified channel will be used. For example if you choose any of 36, 40, 44, or 48 with an 80 MHz bandwidth, the on-air result is exactly the same-- 80 MHz centered over channel 42. Actually setting "42" is not valid.

In the design for 5Ghz, the table above is what you should use. That is not happening.

It has nothing to do with countert codes, only the available ranges matters.

The wikipedia 5 GHz table is really unclear in how it's structured. The channels are actually structured in the same way as the 6 GHz channels - see the 6 GHz table.

A 40 MHz channel is almost never specified as its center frequency, but as a 20 MHz channel plus a specification of "adjacent" channels. Either 36+adjacent-up or 40+adjacent-down - I forget what the official convention is. At least it seems that wifianalyzer appears to use adjacent-up when displaying things. wifianalyzer will show the center channel in results, but in parentheses show the actual beacon channel. Other systems will only show the beacon channel

Part of this is that for compatibility reasons, beacons are broadcast at 20 MHz bandwidth on known 20 MHz channels. This allows a 20 MHz-only client to join a 40 MHz capable network

For another way of writing it - https://support.huawei.com/enterprise/en/knowledge/EKB1000079063 - specifically this part - "Two neighboring 20 MHz channels are bundled to form a 40 MHz channel. One channel functions as the main channel, and the other as the auxiliary channel. The main channel sends Beacon packets and data packets, and the auxiliary channel sends other packets."

OpenWRT specifies HT40/VHT80/VHT160 by their main channel, not by center frequency, because that's where the beacons get transmitted

Page 7:
snip
A few examples (from [9]) will help to illustrate how these parameters work to provide
the center frequency and bandwidth: (Since a VHT STA operates in 5GHz band, the
examples will assume a regulatory class that has a channel starting frequency = 5
GHz.)

is an 80 MHz channel with

At the 5Ghz section you see the center channels.

The wikipedia 5 GHz table is really unclear in how it's structured.

the table above is what you should use. That is not happening.

This table gives indeed a clear view, 80Mhz starts at 42.

Now, when you choose other channels then 42 and choose 36, will OpenWRT make 42 from it, because it is in the range of the 80Mhz?

Now, when you choose other channels then 42 and choose 36, will OpenWRT make 42 from it, because it is in the range of the 80Mhz?

I don't thoroughly understand the wording of your inquiry - I'll try though...

If your AP or client is transmitting at 20 or 40 MHz, then yes it will use the appropriate channel:

Perhaps it'll help if you stop thinking of them as individual channels; but rather as a frequency range used for channels 36-48. As you can see, the larger channel bandwidths are divisible by half of the next size.

(The graphic shows that.)

Maybe it will also help to remember that you have to pick a 20 MHz channel - as the AP will decrease its TX bandwidth if there's congestion, etc. on the band.

Yes. OpenWrt follows the standard for the 80 MHz blocks, such as "channel 42" covering the four 20 MHz channels centered over 36,40,44,48. It will not transmit an 80 MHz signal that is not one of the standard blocks.

The reason I ask is that ONLY 36 works for me and I am not sure why.

One thing to also keep in mind is that there is a 90 second "listening for radar interference" clock that must run and expire when you switch to, or power up on a DFS channel in a DFS regulated country such as the US. This applies to 60, 100, 116, and 132, etc.

When you say "set a country" are you talking about in general settings under system properties where the timezone is set or somewhere else?

Nevermind i found it, it was set to 'driver default' instead of 'US' I will test and get back to you. Thanks for the assistance.

After changing the location to US i was able to select a less crowded band (116) and all is working. Thanks again for the assistance @mk24 and @Almondo

Glad you got it working by setting the correct country.

OR (and this is even more correct) if we use center frequency there will be 0 overlap in channel numbers which is how the bandplan was designed. There is no need to even allow selection of band width. Each channel will correspond to its correct bandwidth.

This is the point of using center channel in the bandplan. Each channel number corresponds to its bandwidth and bandwidth never needs to be selected. 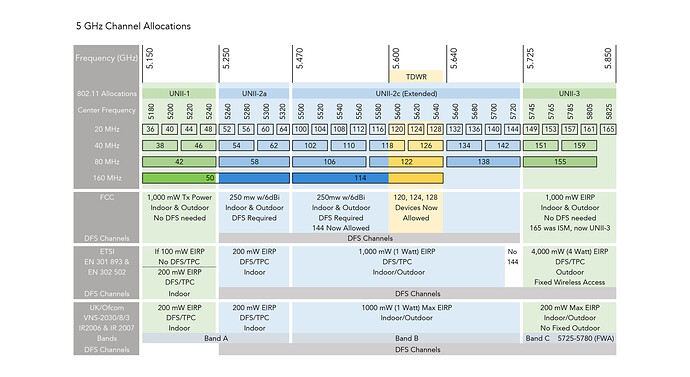