CeroWrt II - would anyone care?

very old protocols (like tftp) used in early boot that need to be upgraded to ipv6 also.

that's an interesting issue. If we mean in the bootloader, for a lot of hardware that isn't directly under our control right? is tftp used in actual OpenWrt OS?

thx for another piece of data showing that ipv6 has been in decline since covid.

I am in general allergic to government regulation and taxes intended to be a forcing function towards a technologic future, I would prefer the technology itself be compelling, and for folk to honestly consider how it needs to be improved for "grandma" to be able to use it.

Network protocols are compelling when everyone else is using them, chicken and egg... Normally I would agree with you, but this is a clear public goods issue.

ipv6 has been in decline since covid.

Decline in US possibly but not at all decline globally: 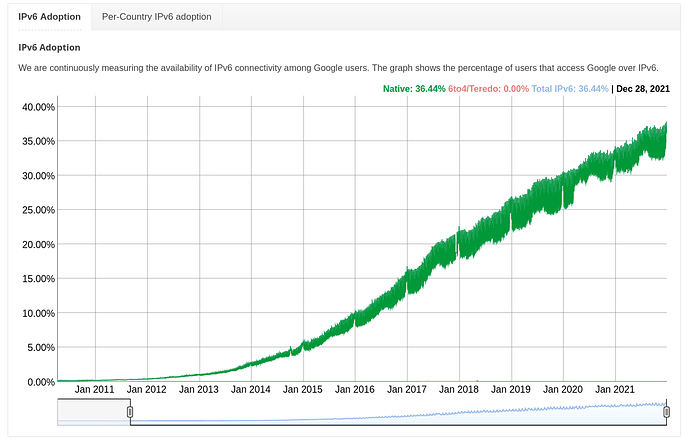 That bump may well have been kids in schools using T-mobile hotspots or something. it's an interesting step up then step down feature.

improved for "grandma" to be able to use it.

ipv6 is way more grandma friendly than NAT forwarding and UpNP! or CGN.

If we do that we effectively admit that IPv6's upgrade path stinks... pro-tip, if you think you need to force your users to do something you claim to be advantageous to them, you might doing it too hard ;)...
Mind you, I am totally fine with regulations and strict enforcement where useful, but as clearly IPv4 is limping along just fine this is not a case where strict enforcement and monetary fines are appropriate.*

As I alluded to earlier in this thread, trying to force a new network-philosophy on everybody as part of the transition to evade the IPv4 crunch apparently was not the smoothest of "sales operations". A bit more pragmatism might have worked wonders....

*) I am with you partly in that I hope for ISP regulation that all end-customers can expect dynamic public address assignments with a full range of ports (modulo those few traditionally filtered for security reasons). If an ISP decides to realize that via IPv4 fine, but IPv6 is also fine(r). My point here is that independent of IPv4 or IPv6 only supplying internet access via CG-NAT is IMHO too little to be called internet access service (a view the EU seems to implicitly share: "End-users should have the right to access and distribute information and content, and to use and provide applications and services without discrimination, via their internet access service." Which is clearly not generally the case when CG-NAT is used)

This is more of a monopoly issue than it is a technology issue. It's not different from say taxing / licensing the use of spectrum. Suppose I have an encoding scheme that enables everyone in the world to use spectrum efficiently, and devices that implement it. Do we continue to allow incumbents to use their exclusive licenses, or do we put some big tax on their use of exclusive licensed spectrum and relenquish that tax when they switch to the new encoding scheme?

The consistent weekly heartbeat of IPv6's proportion of traffic spiking at weekends suggests that neither grandma nor consumer providers in general are the problem; in fact mobile is probably where we can expect leading IPv6 growth: a grand total of two really significant end-user platforms and a high degree of carrier control means they can roll out sweeping changes relatively autonomously.

It's particularly interesting to note the anomalous period in early 2020: a raising of that midweek "trough" in the graph. People suddenly staying home, teleworking infrastructure lagging for a few months suggests that the cause was a reduced ratio of business users on business networks.

neither grandma nor consumer providers in general are the problem

Indeed, most grandmas use Ipv6 daily... on their phone. Many are using it on their home network connection as well. My mother is for example, but she doesn't know anything about it. When my kids wanted to open a minecraft server to their friends I told them to get their friends to use Ipv6... those who use carrier gateways had it already, those who had their own router didn't... the consumer routers put it behind an "advanced config" switch... eero for example.

This is more of a monopoly issue than it is a technology issue.

IPv4/6? I fail to see the monopoly here. Both actually work (reasonably) well for end-users. Sure, mandatory NAT (to multiplex the typically single pubic IP address to multiple end-points) is not really "nice", but by now users have learned to live with that.

It's not different from say taxing / licensing the use of spectrum.

IMHO a different kettle of fish, since IPv4 and IPv6 can and do coexist peacefully in the existing internet so there is no mutual exclusion involved here.

Do we continue to allow incumbents to use their exclusive licenses, or do we put some big tax on their use of exclusive licensed spectrum and relenquish that tax when they switch to the new encoding scheme?

That depends on your local legal regime, but e.g. in Germany mobile carriers only license the right to their chunk of spectrum for a limited term, so there always is the simple option of not allowing carriers to apply for new license periods if spectrum is to be rededicated... (and that actually did/does happen, e.g. when terrestrial TV spectrum was chopped down and was/is converted mostly into LTE/5G).

And by the way (non state agent) spectrum holders do pay for their exclusive access to "their" rented chunks of spectrum over here, so introducing taxes on top of the spectrum auctions seems rather problematic from a legal standpoint, and not even necessary form a policy perspective (unless we postulate our new encoding scheme needs to be deployed ASAP and can not wait for the "natural" spectrum recycling).

Tell that to the population of Africa.

The point being that there are about 7 billion people on the planet, about all of them will need internet access to multiple (let's say on O(10)) devices to maximize their economic growth and prosperity, and there are only 4B ipv4 addresses. We need very much more than 70B. It's unacceptable as a political state of affairs that the "haves" (organizations that "own" ipv4 address space essentially permanently) can lord it over the "have nots" (anyone who would like to get connected to the internet, and/or maybe offer services to the world, but wasn't around in 1981 when it was free to get 10M addresses assigned to you.

70% of websites cannot be reached over ipv6. 240 million new ipv4 addresses could be useful to multiple populations, over time.

Think how fast those websites would get online to the ipv6 world if we start charging $50/mo rent for an end user to use an ipv4. Right now ipv4's are an asset, and an economically valuable one. Make them a liability and ipv6 becomes super attractive, the transition would be FAST.

China’s Authorities Push to Accelerate IPv6 Adoption: Should Other Countries...

I do not want to keep on harping about this much longer.... as IPv4 really has reached the end of its growth (that still makes turning an additional 240M addresses useful again desirable).

My point is that with all its clunkyness NAT does work okayish (I am talking NAT with one public IPv4 and a full set of ports here), and one only requires 1 public address per household. According to Wikipedia and the UN the average householdsize is >2, so the challenge is not 70B out of 4B, but rather 3.5B out of 4B, which is much less dounting (still impossible given that not all IP users will be households). I see quite a bit more useful life in IPv4 and think Dave is spot on with the observation that the two IPs will continue to live in parallel for a long time.

As before, I think IPv6 roll-out could have been expedited if it had not come with a mandatory new philosophy (to still achieve the same old objectives), but it still would have been a multi-decade endeavour and that is also mostly water under the bridge now.

To be explicit, I am fine with IPv6 as it turned out, it is and will be useful, but it is not the most pragmatic solution and gets rid of some IPv4 warts, while introducing new ones.

BTW, I dislike the IPv4 tax/fine idea because I believe that good regulation madates desirable outcomes on principle and not strictly the current implementation. If you mandate e.g. public reachability for in and outgoing traffic but leave it to the ISPs to think about the implementation you have a regulation fit for IPv7 as well.... if you just fine IPv4 you basically just gave an incentive to rename IPv4....

I agree lets not harp on it longer. My core point is that tech people are apt to think of these problems as tech problems, they arent, they are societal/political problems. Its a game theory problem, and its a political issue, and its an economic issue and the losers at the moment are 6B poor people not some rich gamers who have to use UPnP and the winners at the moment are people sitting on big swaths of IP space while the price of IPs is growing exponentially. 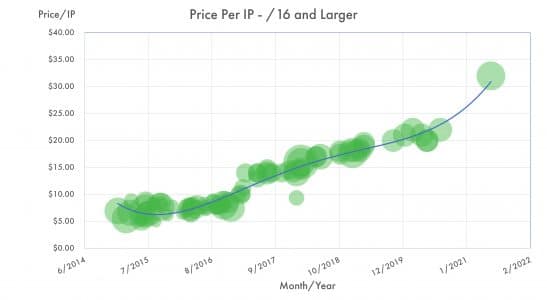 Learn about IPv4 pricing to become an informed buyer or seller. Get in touch at 716.348.6768 if you have any questions.

So long as we think of this as a tech problem the transition will be slow and pulling teeth, when we set a large economic incentive the transition will be rapid. We see the same thing in for example energy generation. The price of wind and solar dropped so much compared to fueling coal and gas that energy companies are desperately trying to switch as fast as they can. 10 years ago this was unthinkable.

Think how fast those websites would get online to the ipv6 world if we start charging $50/mo rent for an end user to use an ipv4.

The two biggest problems with this idea that spring to mind:

Amazon is an end user, if they've got 10M ipv4s and suddenly have to pay $500M a month I think they'd transition pretty quick, like in 2 weeks.

think about what this would do in the poorest parts of the world, who are the least equipped to transition rapidly. It'd be a double-whammy.

valid concern, but perhaps we can eliminate the tax for anyone using ipv4 purely as NAT64 endpoints

Amazon is an end user, if they've got 10M ipv4s and suddenly have to pay $500M a month I think they'd transition pretty quick, like in 2 weeks.

A confusion of market forces vs. public good is at the heart of pretty much all of the world's disparities. Amazon has paid a lot of money for IP blocks as a capital investment, and nobody told them "you can't do that because it's a public good". To turn around and say "it's a public good again and you didn't really buy them, now rent them from us" is not going to go over well.

I'm firmly in the "public good" camp. I don't think they should have been able to buy them in the first place. But we're there now and maybe we can dial it back with the IPv6 address space, but those who were allowed to trade them will have a case to bring, and they have a lot of clout.

No doubt you are right, big rich companies are definitely encumbents who want to keep a strong expensive market for ipv4. We shouldn't do mechanism design as offhand comments in discourse forums, the main thing I'm trying to communicate is that the problem is political and economic and game theoretic, not a technology problem.