I used it as wireless repeater first for a couple of months, without issues. Then I started using it as a access point, receving Internet via Ethernet from the main ISP router, with no issues at all. I usually turn it in the morning and I use it for a couple of hours, then I turn it off.

A couple of days ago I configured the WAN port as a LAN port. After doing this mod, the BT Home Hub reboots 5-10 minutes after the first boot (the blu light turns in green and then blu again) and I really dunno why. After this reboot, it seems to work fine without issues.

Anyone have a similar problem?

Off the top of my head: I seem to remember that the HH5A did strange things when the DSL modem was left active but not connected to an actual DSL line. I don't know if this has been fixed in the meantime, but if you don't use it with a DSL line it certainly doesn't hurt to disable the dsl_control service.

I'll try this, thanks!

Do I need to use these two lines every time I turn on the router?
P.S.: now it's 14.55. I have the router active from 13 and it rebooted two times.

What does cat /sys/kernel/debug/crashlog
output?

It may be a variation of the known problem investigated in March 2017. You have to disable 'dsl_control' as pointed out by @takimata

Is this file deleted once you shut off the router? I've turned on the BT a couple of minutes ago and there's no crashlog file.

Is this file deleted once you shut off the router?

Not sure, but not every crash/reboot is guaranteed to create one in the first place. I just thought on the off chance this might exist, looking inside it might have been helpful...

Now it's 30 minutes that the router doesn't reboot. I dunno if disabling the dsl_control worked or not (even because I dunno if I have to disable it every time I reboot the router).

stopping is temporary, disableing is permanent, you don't have to do it every time.

This particular issue should have been fixed in the mean time, so upgrading to the current stable version is recommended either way (respectively even 19.07-rc2).

Of course disabling the modem, if it's not going to be used, is still worthwhile.

Is It safe to update this hub? I've bought It with Openwrt preinstalled and i've never used this hub before.

It should be safe, although I don't know if it's worth upgrading yet because even with 19.07.0-rc2 you still need to apply a speed fix. And there's other speed enhancements being worked on, but we probably won't see them in any builds for a while yet.

Some of the LED options don't behave correctly either. For example, try to use phy0radio so that the LED turns on (not blinking) when the radio is enabled. If you restart the radio from LuCI then the LED will turn on, but if you reboot the hub then it won't.

The default WiFi settings also seem a bit weird. For example, QCA9880 (radio 0) will use "driver default" for the country which limits the power to 20 dBm (100 mW) and despite the width defaulting to 80 MHz it'll use channel 36. However, if you change just the country code to GB then it'll start using a channel like 116 and the power will go all the way to 27 dBm (501 mW).

I've also found that both radios always use the same country code, even though LuCI allows you to configure them separately. So for example, if you've got radio 1 set to US so that you can use 20 dBm and you change the country code of radio 0 to GB then it'll reduce the power of radio 1 to 18 dBm because it's also changed the country code for radio 1 despite the config and LuCI saying that it should still be US.

I think that I'll stay on 18.06 rc for a while, waiting for a more stable newer release.

Are you a BT 5A daily user? What's the best Openwrt release for it?

I'm currently still using 19.07.0-rc2 because I can't switch builds too often. All of the hub restarts would cause my speed to be reduced due to DLM.

Maybe you could upgrade to maurer's 18.06.4 build? I haven't tested it so I don't know if it's got the same LED issues and weird WiFi defaults, but it looks good in the results posted there.

19.07.0-rc2 offers software flow offloading, which is nice, but if you enable that then you can't use SQM. 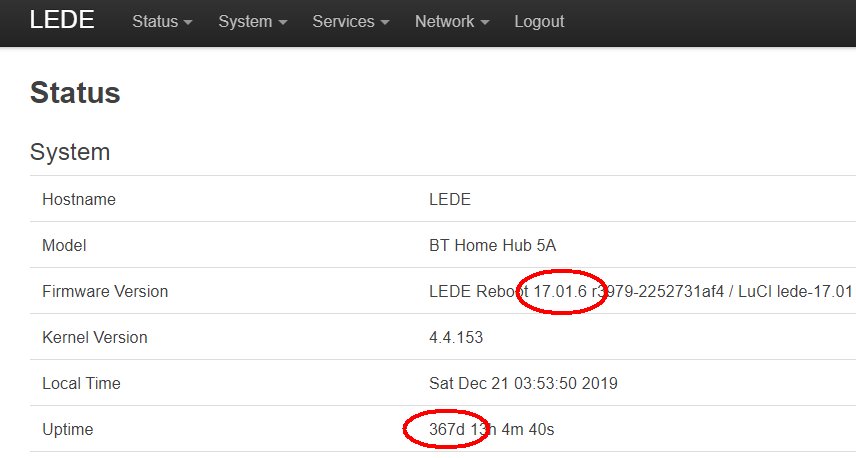 Wifi is disabled on this router, because the HH5A 5 GHz wifi coverage is weak in certain upstairs bedrooms compared to previous routers I used. Wifi instead is served by a separate wall mounted WAP from centre of house.

So I am obviously not @blackbox, but I do use a BT HH5A daily under OpenWrt 19.07-rc2, but only as bridged modem, the decive is simply not powerful enough to deliver everything I want, but it does work with my 100/40 VDSL2 link, pretty much as expected. I started with OpenWrt 17.NN and followed through all 18.06 versions before switching to 19.07-rc, it pretty much worked equally well for all versions, but again, as a simple bridged modem only. (I do use a wifi SSD as second channel into the BTTHH5A's GUI in case the wired VLAN based access is not up and running, so I know that the network also worked, but no idea about the achievable wifi rates).

All in all a nice little device, and thanks to @bill888's excellent install instructions also a breeze to install/configure (I ended up doing something slightly different from Bill's recommendations, but only after reading and understanding those first, and luckily it worked ;))

I'm not using modem on BT. I use it as a wired client, maybe not in the correct way (I just have a ethernet cable coming from the main modem/router connected to VDSL).

Should I use a specific configuration to use BT as client correctly?

Also, I think I'll stay on 18.06 rc for a while, just to learn better how this BT works in all its parts.