Block mount ntfs - not a tty

what's not a tty?

Can you describe more in detail the procedure or guide you have followed?

so, what i did were: 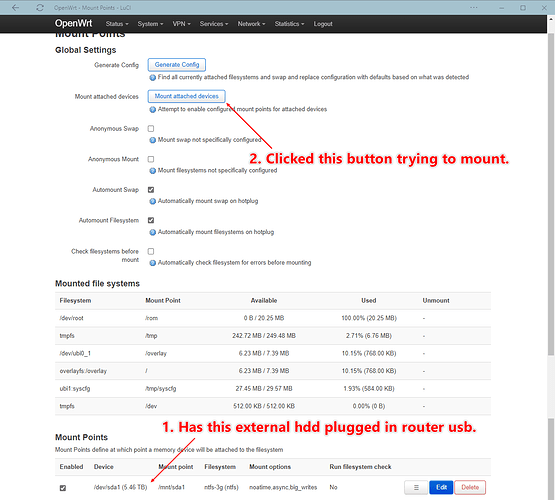 I'm using davidc602's latest build on my wrt1900acs. I'm pretty sure all packages one can *reasonably expect to be necessary for what I was trying to do have been installed.

I'm actually able to mount it manually and by configuring the manual mount command to run on startup I have no problem using the hdd.

I hope to understand the log entry in question because over the past week by trying out for the very first time a custom router firmware i.e. openwrt, I ended up with an intense interest in openwrt and linux and simply want to learn more about how openwrt/linux works.

Any answers/troubleshoot suggestions would be appreciated.

So read here and setup a way to mount it on boot or hotplug.

So is this a bug or just not supported?

Thanks, I'll add a note in the wiki when @anchorwall confirms that it works.

ok, so tried it... seems it's calling block mount which complains ( with ntfs-3g only );

something then wanted mount.ntfs3g in the script ... I think raw mount... but it could not find it by that name... some kind of alias to ntfs-3g...

Anyone is free to fix or update the wiki pages. I added the link to this topic for a week already, so that should do it.