Hi sifus
My new house (200m²) on one level challenges me on wifi. Current mesh router ( Netgear Orbi) cannot penetrate the walls well. (About 5m with 1 wall). Even with a satellite in each room I face drops.
Beside that i would love to have 3 wifi network. 1 for the tenant with full power, one for guests with no powers but Internet and one for various IOT devices and sensors.

With mash not working im thinking to go back to open wrt devices. What would be the recommendation to tackle it?
One benefit i have in mind: the satellites can actually be connected via lan cable in the walls. Unfortunately there is no connection point where the modem is, therefore this need to be WiFi based (i assume). 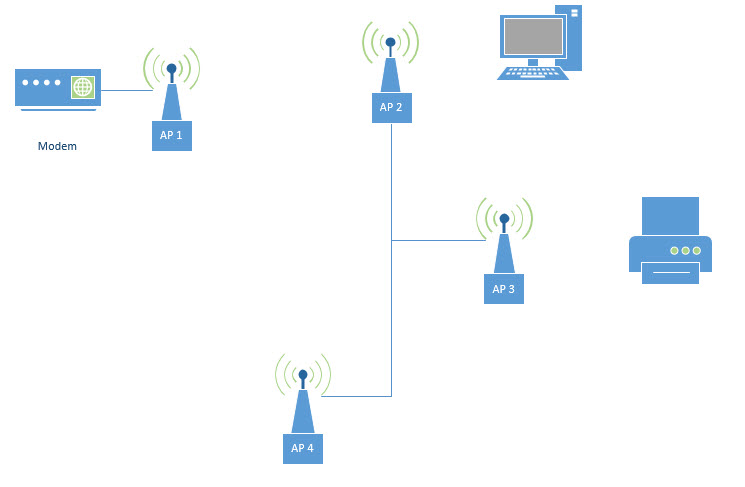 That is roughly what I have in mind. Which hardware and approach would you recommend?

Get a wire from the modem to the rest of the network. How hard would that be? What speed do you need? Power line gear is a good possibility?

Or even get one of those Powerline adapters. Nothing can beat Ethernet when there are Wireless issues!

satellites can actually be connected via lan cable in the walls. Unfortunately there is no connection point where the modem is

Would hiring a professional to install a difficult lan cable run between the the modem location and wired AP network be worth it compared to what you are contemplating spending on equipment? Sometimes we get so lost in "do it yourself" that we forget it can be well worth hiring some help if we can't do it ourselves

. Mesh is interesting, but wired back haul "always works" and works very well. Our two story 300 m2 home is very well covered by only two AP's (EA6350v3 and EA8500 purchased used on ebay) connected by wire to a small gateway router (ER-X) inside a small wall cabinet at the modem location.

If your current mesh network is using 5 GHz for backhaul, using 2.4GHz instead will improve your wall penetration range quite a bit. You can improve 2.4 GHz speed by locking the 2.4 GHz channel width at 40 MHz. It isn't the friendliest thing to do to your neighbors if your spectrum is crowded, but FWIW my neighbor does this without ill affects to me (I mainly use 5GHz anyway). This would be your most cost effective option, only if it helps and meets your needs of course.

As to hardware, there are so many options I hesitate to recommend specifics. Generally, for AP's I would look for Wave2 capable equipment. I got quite a speed boost on 5GHz upgrading from an Archer C7 to a Linksys EA6350v3 for example. ipq40xx and MT7621AT ramips targets are generally well supported and make capable APs. ipq80xx targets are more hardware than you probably need for an AP, but would be a good choice for your gateway/AP1 location if you wire it. If you don't run lan cable from AP1 to AP2, something with a second radio for wireless backhaul at both AP1 and AP2 would be a good idea, for example a Linksys EA8300/MR8300 would be a decent choice for AP1 and AP2 in this case. Making a list of acceptable options first, and then buying what you can find used will save you quite a bit of money if you're looking to pick up 4 AP's.

Yeah this, while Powerline is still hit&miss depending on the actual circuits/wiring, just grab a set on amazon and map your house/sockets and if it does not work send it back.

Yet if it does its a quick setup and easy to extent, but don't expect the 800-1200 Mbit the high-end adapters are marketed at. In practice i got 200-500 Mbit for different floors, depending on the socket. So try&error all your wall sockets, since its hard to guess which one work better or worse.

Adding a wire is quite a job. The nearest point is at the opposite wall and that means hacking at least 15m of wall. Since this is in the hall the quick and easy surface mounted version is out...

Powerline is perhaps a good idea. While amazon is not available in this part of the world, they are cheap enough to give it a try

Now leaving the question which AP I could use and how to setup the various networks...

Adding a wire is quite a job.

What about bringing the internet (coax twisted pair, whatever) into the house somewhere else where ethernet is available?

Beside that i would love to have 3 wifi network. 1 for the tenant with full power, one for guests with no powers but Internet and one for various IOT devices and sensors.

This is more a question for "installing and Using OpenWrt," but OpenWrt will support this no problem.

I find it simplest to set up VLANs for each wifi network on my main gateway router to keep guest, IOT, and main wifi networks separate, and also have the main gateway router be the DHCP server to all the VLANs. Then the "dumb" AP's can be set up with a DHCP client interface for each VLAN, and you can set up a wireless network with an SSID specific to each VLAN on your AP's. I prefer not to use roaming so I can force clients to use a specific AP instead of their locking on to a low speed 2.4 SSID over a faster 5 GHZ, or getting stuck on a slower WAP, so I make my SSID's specific to each of my two AP's as well - for example SSIDs AP1-2GHZ-IOT, AP2-2GHZ-IOT, AP1-5GHZ-IOT and AP2-5GHZ-IOT are all on the same IOT VLAN and get IP addresses from the same DHCP server on the main gateway router. In your case, with so many AP's, and after you get your basic set-up working, you may want to use the same SSID for each VLAN and give roaming a try.

That is the reason for this mess. The previous internet reached just next to the front door and was distributed from there. The newer/better one comes via Fibre in the TV box and therefore is in the main hall. For whatever reason they never pull a network cable from the front door to the TV area.