Nope, it's actually kinda easy.
The reason for this move is explained here: https://openwrt.org/toh/linksys/e8450

Thank you, I think i got it now. Learned something. I have seen the wiki page countless times, but I always misses to click on the gitdiff link, which does explain it.

So switching from old to new driver now has side effects:

As a minor side bonus, since the partition table had to be completely rewritten anyway, the 2 alternating firmware partitions got enlarged, to better use available flash space utilization.

So it was not the plain wish to just enlarge partitions that caused the migration pain, it was the driver architecture change that started it. And that change was due to performance reasons.

…So thats what the effort and script was all about.

@darksky Thanks again for maintaining this page.
I have no editor rights, but I do have some suggestions:

Thank you, I think i got it now. Learned something. I have seen the wiki page countless times, but I always misses to click on the gitdiff link, which does explain it.

Performance really wasn't an issue with either of the three drivers for
MediaTek SPI-NAND.

2021-08-27 a new more performant flash driver had been commited to the master. This new driver skips the pointer indirection to address flash, it works one layer lower and does not do defect management on driver level.

MediaTek's BMT is also supported with the new driver and also that
wasn't the reason for the switch. After all, the very same driver is
also used for other devices which do depend on BMT as the original
bootloader uses that.

That change now has side effects:

Yes, that's correct. We use UBI instead of BMT (One can also use UBI
on top of BMT, though this can have unwanted side effects)

It's unlcear to me what you mean by this, probably this is a
misunderstanding about how flash memory is partitioned, see below.

Yes, and this was also most of the original motivation to begin with: To
have a bootloader with a meaningful dual-boot scheme which actually
prevents soft-bricking the device. The vendor loader, despite supporting
an A/B dual-boot scheme, often ended up in a condition where the user
would have to connect the serial adapter to revive the device.

As a minor side bonus, since the partition table had to be completely rewritten anyway, the 2 alternating firmware partitions got enlarged, to better use available flash space.

There is no such a thing as a partition table on raw NAND flash. This
terminology only makes sense on block storage where we use MBR or GPT
partition table. On raw flash, the partitioning is defined in device
tree, ie. not stored on a fixed block of the flash memory itself.

So it was not the plain wish to just enlarge partitions that caused the migration pain, it was the driver architecture change that started it. And that change was due to performance reasons.

That's wrong. Performance has never been a significant factor in the
whole process.

…So thats what the effort and script was all about.

Not quite. My original intention was to have the option to replace the
bootloader for something 100% built from source, more robust and yet
also more flexible than the vendor's approach. Later on the change of
the NAND driver resulted in read errors of the 'factory' partition
which, because the ECC data in OOB area didn't match the new drivers
expectations. This problem initially affected both, the UBI and non-UBI
builds. However, as the UBI installer was already re-writing most of the
flash it was easy to also make it re-write the 'factory' partition to
fix the ECC errors.
This is why most users at this point switched to the UBI version because
also for using the non-UBI version one had to re-write the factory data
to get rid of the read errors and installation became non-trivial for
that reason.

I do not believe that irqbalance does anything the that the system isn't doing without it. Try looking are cat /proc/interrupts after some uptime without it then add it enabled it and repeat.

I may have missed something obvious, but when the UBI change became permanent did that drop the -ubi from the firmware image name? 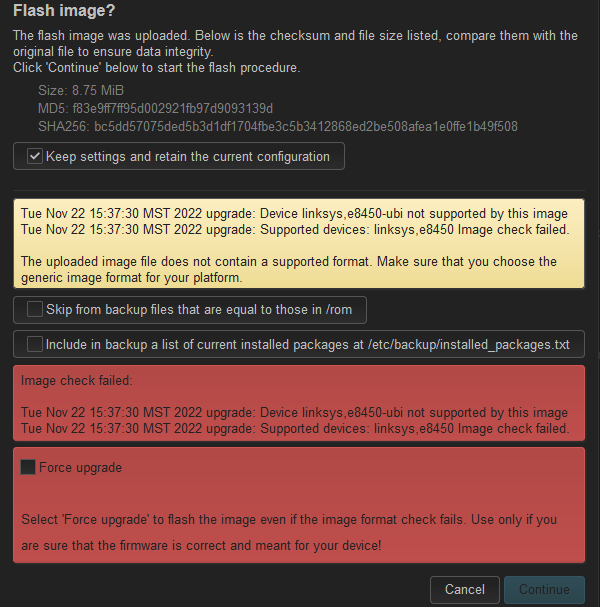 On that same note, is there not something similar for updating to official releases like how we could use an updater within LUCI for snapshot versions?

when the UBI change became permanent did that drop the -ubi from the firmware image name?

No.
The "UBI" is still prominently in the ubi variant file names.

You have the wrong file.

Considering a Belkin RT3200 and had a couple of questions.

From the device OpenWRT wiki page, there is documentation on how to "Change the default CPU governor" Is there any downside to making this change and if so may I ask why it is not the default?

Regarding "Enabling Wireless Ethernet Dispatch (WED) HW acceleration for Wireless clients," while I fully understand there is no way to specifically quantify the improvement in speed if enabled but is the improvement like 10-25% or something greater?

Any way for these options to be made user selectable in the firmware GUI in a future build?

Wireless Ethernet Dispatch (WED) HW acceleration for Wireless clients makes wireless downlink (download) from the router to the clients bypass the CPU for lower CPU load. But not for uplink (upload) from the clients on this router.

Thanks for the additional info on WED although I'm not sure it really addresses my questions. The wiki states, "reduce CPU loads/increase routing throughput" so is the difference significant or just theoretical?

That limitation seems to be changing:

That limitation seems to be changing

@dan3 Do you get proper transfers with collectd/luci-app-statistics? For me none of the transfers (except maybe for eth0) show proper values - for example puling ~150Mbps from the internet on lan3 port (linux host) I don't see this traffic neither on wan nor lan3 port graphs.. It shows for ex.13,5kbps...

I guess it could be because of HW acceleration you could try to turn it off and see.

I have not had much luck with tracking bandwidth. I think I broke it by installing both luci-app-statistics and luci-app-nlbwmon. I believe polling Tx/Rx stats resets the values to zero. With two services polling the same stats, and saving their results in separate rrd files, neither service has good data. SMH.

I try to activate wed as described on router openwrt page https://openwrt.org/toh/linksys/e8450#enable_wed but this file /etc/modules.conf doesn't exist, any help?