Back to stock firmware WRT3200ACM

Hello everyone, I'm trying in all the ways to return to the firmware stock but I can not, can you help me? I tried the procedure via ssh but it does not work, I can not install the firmware.

return to the firmware stock but I can not, can you help me? I tried the procedure via ssh but it does not work

Just follow the advice to use "-F" switch with sysupgrade to force the flash.

Advice can be found on forum:

Same answer as before: you need to use the sysupgrade command from SSH console (using putty) and use the "-F" force flag to override the format image check. e.g. How to go back to stock firmware on wrt1900acs v2 You download the stock firmware with wget to /tmp and then flash it with sysupgrade. Adjust the commands below to the real link and filename. commands for you: cd /tmp wget link-to-stock-firmware sysupgrade -F -n /tmp/stock-firmware-file

Just change dir to /tmp, download the firmware from Linksys, (maybe verify it), then just run sysupgrade: (you can calculate sha256sum manually (with “sha256sum”) after downloading, if you want to verify the download at the router. But you naturally need the original checksum from OEM or self-calculated at PC or somewhere.) cd /tmp wget link-to-stock-firmware sha256sum /tmp/stock-firmware-filename sysupgrade -F -n /tmp/stock-firmware-filename e.g. cd /tmp wget http://downloads.linksys.com/…

I did exactly as you wrote me these errors, look at the picture

That looks like it worked, what was the result? Remember there are two partitions.

I restarted but does not open the stock firmware but always openwrt. Honestly, I do not know how to use the two partitions, I would like all the stock to come back

what version of owrt is currently running?

I'm not aware of any bugs in that version which would stop you from forcing the OEM; but there have been occurrences. You could try just flashing some other version of owrt, repeat the above, to see if it will let you off.

so i advise you to install a less recent version of the firmware?

ok, I try to install the previous version. Thanks

Flashing the Linksys stock firmware works quite as expected:

The router flashed the firmware ok and after the boot, the Linksys GUI was ready at 192.168.1.1

Note My router is normally a dumb AP and was not connected to internet during the flash, so after the flash it kept flashing an orange LED, but the router had booted quite ok and the Linksys GUI was there. There was no need to separately reboot the device after the flash.

If that does not work for you, there is probably something weird going on in your system.
You might e.g. reset all Openwrt settings first (with "firstboot"), or you might flash an older version like anomeome suggested (and do it without saving settings, which does the same as "firstboot" would do).

Or maybe the download somehow failed?
The checksum should be:

Ps.
You can check from the SSH console which versions are installed.

For example, my router's primary partition mtd5 has the currently running Openwrt, while the other partition mtd7 has now the Linksys stock firmware:

Note that luci-app-advanced-reboot app will show that in a user-friendly fashion.

Why in the hell would any one want to flash back to stock anyway? Stock fermwair is a clusterfuck!

I managed to restart the router nice partition 2 but I can not get into the web interface, it seems that there is nothing installed, how do I install the firmware on partition 2? 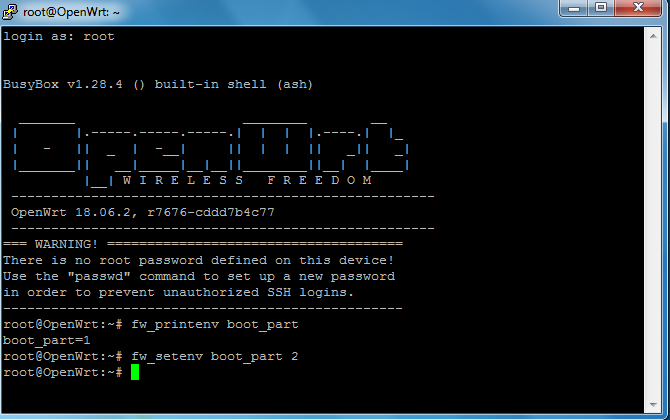 how do I install the firmware on partition 2?

You simply flash from the current partition to get a new firmware to the other partition.

Both OpenWrt and Linksys stock firmware always flash the other partition and then change booting into that partition (while the current one stays as the fall-back option). This happens in a round-robin fashion.

...you first start using 1, new firmware gets flashed to 2 and booting switches to 2, and next time the flash (from 2) goes into 1 and booting changes back to 1. and so on.

That last post didn't make sense to me. What did you want to do? Stock on both partitions? Stock on one, and OpenWrt on the other?

Whatever you want, you must boot from the OPPOSITE partition to flash because neither firmware will overwrite the CURRENT partition.