Hi there,
I am tinkering on my network infrastructure for different purposes, mainly to connect a variety (20+) of LED fixtures running ESPs for my lighting installations at festivals, open airs and other possible events. As I dont know what the future locations will be like, I try to be as flexible as possible and prepare my rig for all kind of situations. 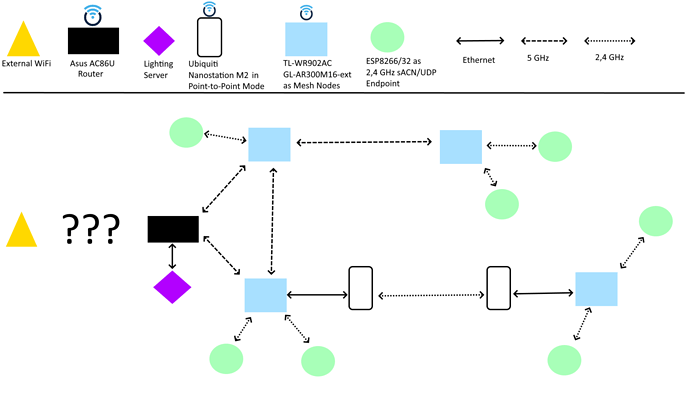 As I am looking for the Jack-of-all-Trades, I could need some advice regarding the setup:

For what you have described, batman is not needed. A simple 802.11s layer 2 mesh would be more than adequate, but up to you of course.
Maybe read:

802.11s Based Wireless Mesh Networking 802.11s is an open-source standard for connecting wireless devices without having to set up infrastructure. It operates on Layer 2 and makes sure that all nodes can see each other on a bridged Layer 2 network...

These are 2GHz only, so for your proposed 5GHz mesh will be of no use.

How do I get Internet into my network from an external WiFi source?

Use the 2,4GHz radio of the ASUS router to connect as a wifi client

The Nanostation M2 is 2 GHz only, is very outdated and short of flash/ram so can be problematic.

For what you have described, batman is not needed. A simple 802.11s layer 2 mesh would be more than adequate, but up to you of course.

batman was a recommendation by so., so I did read into the topic as far as my tech understanding goes. batman should "find the best routes through the network" is what I took so far. Does that more apply for bandwidth orientated scenarios with changing/moving clients?
I would probably make some tests on my own later as I have identical hardware.

These are 2GHz only, so for your proposed 5GHz mesh will be of no use.

Yeah just saw that too. I bought more used WR902AC routers and will make them my main nodes. I am thinking about adding some "normal" AC based routers for when AC is available. Any recommendations for about max 30Euro? Due to the compact size I like the AC plug "range extenders", but dunno how they perform for this job compared to normal ones.
Also I am wondering if devices with 2x5GHz could be used as "relays" between nodes (i.e. if thats better than 2,4+5).

The Nanostation M2 is 2 GHz only, is very outdated and short of flash/ram so can be problematic.

AH, I forgot to add: I would use them as "dumb relays" for bridging larger sight-to-sight distances. Less for the lighting network but more for getting the "service network" connected.

BATMAN allows a mesh to carry VLANS (e.g. isolated networks for lighting and ticketing) simply with the notation bat0.N. This does not work on plain 802.11s.

Ah, thanks, thats a good point.

Locally route endpoints into the mesh at the mesh nodes. Avoid DHCP or other broadcast traffic on the mesh.

So static IPs? And sth. else?