Hi everyone,
I'm considering buying one of these two used wifi routers to use as a cheap dumb access point.

I'm currently using a DGN3500 with openwrt which serves me fine in terms of coverage but it's now too slow. The clients are a couple of laptops, a couple of smartphones, a set-top box and a console.

The Archer C6 only has 8mb of storage and reported to have issues with low 5ghz performance, though it seems to have been resolved with the latest releases.

The R6220 has 128mb of storage, a more performing (I guess) dual core cpu but people lament low wireless coverage. It would be placed in the center of my 10m x 10m one floor building and there would be one wall separating it from each routinely used room. But I can't say how it would fare.

Opinions and suggestions are welcome. Alternatives would be too. I live in Italy and prices for well-known openwrt compatible devices are somewhat inflated. I would, for example, prefer an Archer C7, but at a minimum of 65€ for an used unit, it seems a bit overpriced.

P.S.: My local electronic market has a D-Link dir-2660 ac2660 on clearance for 50€ but it only supports a snapshot release! Would it be worth it?

The c6 comes with better wireless, but the flash size is rather limited. OpenWrt currently weighs around 5.5 MB, mentally add around another half MB for bootloader and other vendor provided partitions, and you are at roughly 6 MB flash usage on an 8 MB flash chip. This won't leave a lot of extension potential (runtime installed packages) and might bite in the future (kernel- and userland are slowly growing, expect another ~200-300 KB at least for the next version after 21.07.x); buying such a device in 2021 isn't the best idea.

Disclaimer: I have no personal experience with ramips/ mediatek devices.

At this point I would personally prefer mt7615e over mt7603e+mt7612e, as the newer chipsets are getting more attention from Mediatek. My understanding is that both the hardware and the driver offer more potential and have fixed rather annoying issues in noisy/ congested environments (affecting 2.4 GHz/ mt7603e in particular).

Indeed it seems I was wrong. Read it here that it was dual core. Instead wikidevi states it is single core with two threads.

The c6 comes with better wireless

Is it because the wireless chips perform better?

Where can I confirm it is going to be supported? And when is it expected? I'm dubious about buying it since people reports having troubles flashing openwrt and while I'm open to experiment, I don't want to buy something that may or may not work. If it were supported by a stable release, I would have already bought it.

I'll try to see if I can find them. Unfortunately, in my country, ISPs bundle their offer with their proprietary all-in-one wifi modem/routers and so there's not really great availability of second hand wifi routers supported by open-wrt.

The 5GHz is fine, but 2.4GHz has been unusable for years. It's too old for anybody to prioritize fixing when people can work on the exciting wifi6 mt76 targets.

The 5GHz is fine, but 2.4GHz has been unusable for years. It's too old for anybody to prioritize fixing when people can work on the exciting wifi6 mt76 targets.

Good to know. I've seen there is another bug concerning bad blocks in the flash memory. Maybe it's related?
Either way, I was starting to lean towards the dir-2660 as it seems quite a good deal since it's in the release candidate.
It is still AC though. Anything else that eludes me that could be a deal breaker?

Did you experience the issue mentioned in the post above regarding the 2.4Ghz band?
Any problem with wifi coverage?

If I use those images and the D-Link recovery GUI method is it going to work fine?
As I understand it, this is basically "stable unless major bugs are found", right?

I've seen there is another bug concerning bad blocks in the flash memory.

That bug has been fixed quite some time ago, for 19.07 and later.

Did you experience the issue mentioned in the post above regarding the 2.4Ghz band?

This was not directed at me, but I'll still answer: I have two R6220s running, neither of which show any problems on the 2.4 GHz radio. However, I am only running IOT devices on the 2.4 GHz band and I even set it to 20 MHz width, so I am unlikely to put it under heavy load.

I would probably not recommend getting an R6220 as a primary router (and I will soon switch to something with a bit more oomph myself), but as an access point it is ... fine I guess? I actually never bothered to measure or compare its range, but as far as speeds go, the 5 GHz band is doing its job well.

@dana44 Were your 2,4 GHz results better with older mt76 versions?

I have 2x R6220's but only use then as access points
I have never noticed anything with 2.4G but have it disabled 90% of the time
as I only have 1 2.4G access point left with it enabled
2.4G is so congested & it's so slow with only 20Mhz anyway
but if 2.4G is a big deal for you make sure you know USB3.0 interferes with this
so take note that devices with USB3.0 ports can have 2.4G problems

Slightly better with 18, but I didn't go further back

Wifi quality is a harsh subject, so many things can go wrong. So I'm not surprised if one user mention issue, while another doesn't.

I use one R6220 as AP at home, and managed two others elsewhere. Mine is only used with 5GHz and has a stable link and good bandwith. The two others use both 2.4 and 5 GHz wifi. Their users never complain about wifi quality (and they know how to !). So far I can't blame the devices, they perform dutyfully.

I would not recommend the R6220 as a primary device, especially if you have a FTTH. It's old, and you can find much better nowadays. But if you own one, or can buy one for cheap, and want to use it as AP, it's still worty.

Can you run the flent test? I'm sure the 2.4GHz works sometimes, but it certainly doesn't work all the time. It would be useful to have a reproduction case for the problems.

I had given the r6220 to a friend, but her kids found the wifi too unreliable to game with and got the device back.

I would be leave this
I thing all wifi add to pings & is bad for gaming
but 2.4G is just to slow for gaming even when working 100%

Thanks everyone for your inputs.

I ended up buying the DIR-2660. I'll first test it with the stock firmare to check that everything works fine and then I'll try to flash OpenWrt.

The HW version is A1 with firmare 1.03 out of the factory. Should I avoid upgrading the firmare while testing it or, as I suppose, it doesn't make any difference for the future switch to OpenWrt?

As I understand, to flash it, I'll have to use the images I can find here:
https://downloads.openwrt.org/releases/21.02.0-rc1/targets/ramips/mt7621/
using the D-Link Recovery GUI method: 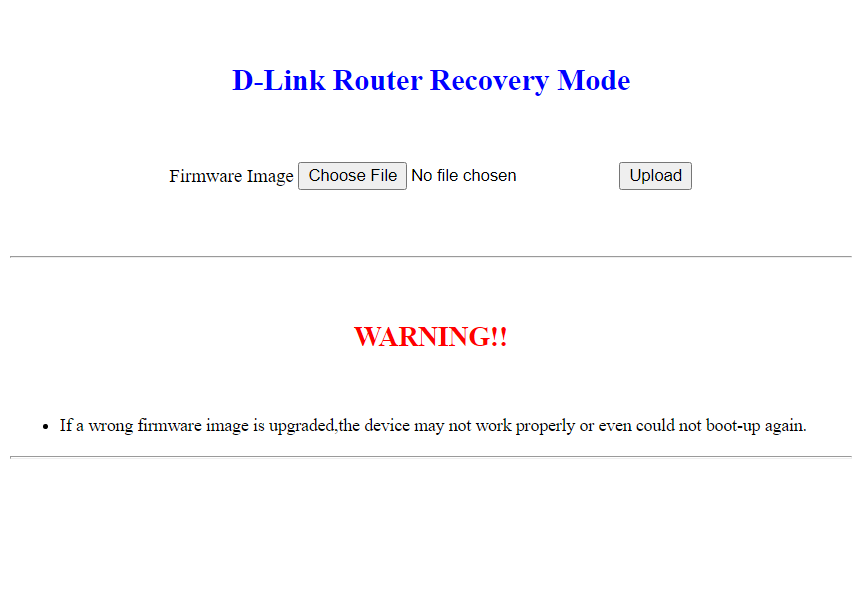 D-Link Recovery GUI Most D-Link devices have an emergency recovery mode embedded on the bootloader. This recovery mode provides a basic web page that allows flashing a new firmware even when the device is bricked, which is very handy not only for...

Anything I should be wary of while trying or, as stated, is it actually impossible to brick the router using this method?
Hopefully it works fine as a few months ago people seemed to have problems flashing this router:

Hello, In my case, the stock FW had wget which means you can download anything directly to the router. If you connect the router in a way that it has internet access, then you can probably even do: cd /tmp wget https://downloads.openwrt.org/snapshots/targets/ramips/mt7621/openwrt-ramips-mt7621-dlink_dir-2660-a1-squashfs-factory.bin Note: editing the link above - in the first version I had pasted the wrong image link - the initramfs-kernel instead of the factory one. (but do confirm the imag…

tho I do see this on the .ru firmware but that is a different animal all together

That's just false. Games are generally the lowest bandwidth application out there, they just need a low reliable ping. There is nothing about 2.4GHz vs. 5GHz that would impact that, even in theory.

Case in point; we regularly game with devices on both 2.4GHz and 5GHz connected to our 7800 and there is no difference in feel or displayed ping.

correct i would not game on any wifi connection