Hi All,
I downloaded the kernel and sysupgrade for Archer C20 V5 from the link: https://firmware-selector.openwrt.org/?version=21.02.0-rc3&target=ramips%2Fmt76x8&id=tplink_archer-c20-v5

Then using Solarwinds TFTP server on windows 10 desktop, I TFTPed the kernel and rebooted the router. There were no lights lit up even though it was powered-on and the UI was not accessible over 192.168.1.1 or 192.168.0.1

Then I TFTPed the sysupgrate and rebooted the router. Now the status is

Can you please help me recover the router?

Unfortunately the firmware selector does not direct the user to vital instructions which are found here:

https://git.openwrt.org/?p=openwrt/openwrt.git;a=commit;h=86e7353bff2a5de257de8ec62e782f016eed143c
In short this is one of the TP-Link models which always overwrites the bootloader during an upgrade, and requires a new bootloader to be the first part of the upgrade file. Since bootloaders are generally outside the scope of the OpenWrt project, it is necessary to combine the bootloader from a factory firmware file with OpenWrt before flashing.

Flashing an improper file will prevent any booting at all. The only way to recover now is to write directly to the flash chip with a hardware SPI programmer.

Thanks @mk24 for your response. Seems it's game set match for my router

@mk24 I managed to recover my router without SPI programmer. The trick was in the link you shared. Just followed the below steps from the link

But I am unable to get PPPoE working in Archer V5. My modem's LAN Port 4 is in bridge mode which is connected to WAN port of router. The log says - PPPoE discovery failed.

But I can PPPoE working on old TPLink router with stock firmware. 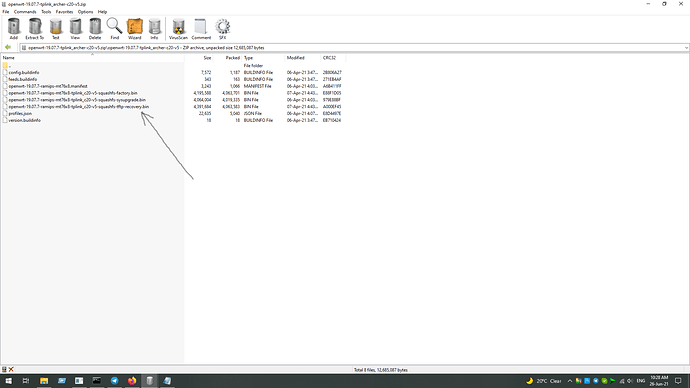 Try this firmware and Upload that firmware I marked via TFTP it's stable version 19.07.7
Forget ver 21.02 till developers release the stable one
Good Luck

Thanks @David.S.Mckellen The router booted after I TFTPed the bin file you pointed to.
The LuCI is also accessible.
But I still struggling to get PPPoE working. Though PPPoE works on an old TP-Link router with stock firmware.
Seems I've to keep trying.

I have managed to get PPPoE working.

Now I've run into another issue, it will be great if someone can help to sort it out.

I've a modem-cum-router installed by my ISP. It has two VLANS configured:
VLAN ID 100 for internet
VLAN ID 660 for VoIP

With the idea of getting a SIP software (e.g. MicroSIP) working on my desktop I did the following configs:

Moment I did Step 3, the PPPoE disconnected. I deleted the VLAN from Network->Switch, PPPoE comes back to life.

What could be the reason:

Please can anyone help to fix the problem?

If it works as described, you should be tagging the pppoe packets 100. Tagged and untagged on the same cable is tricky and doesn't always work on consumer hardware.

I tried tagging 100 Also. Below are the steps I did: