So, hear me out

My device came with the pads for a mini PCIE header, but not the header. It was supposed to be introduced in the next round of production, but that never happened.

Question for the electronics folks. How much of a PITA would it be to place the 52-pin (26x2) header on the pads? At that point, would I be able to introduce drivers that aren't proprietary since I'd be using a laptop WiFi card? Pictures below. Thoughts? 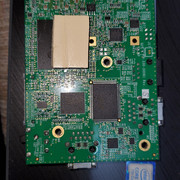 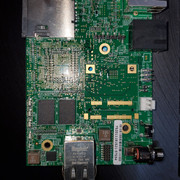 I worry about the absence of whatever U2 is on the other side.

Unfortunately, with Itus gone, I've got no one to check with as to what that chip spot is for. PCBs marked U1/U2 seem to be analog controllers from the cursory Google search (u2 chip 24 pin)? Dunno.. But I see the spot you're referencing

It was supposed to be introduced in the next round of production, but that never happened.

Probably it's not populated, because it's not working like expected in this hw revision and was planned to be fixed in the next revision of this board.

To solder down something like that you need either a decent solder with a fine tip or a hot air SMD soldering station, and looking some videos on youtube to see how to solder things like this.

If the U2 unpopulated area in the first pic is unrelated, it might work electrically but you probably also need some firmware support to use it (at the very least the device tree should list that there is a pcie port in this device at some address).
I see in the bootlog from the wiki https://openwrt.org/toh/itus_networks/itus_networks_shield

so it does seem to have that already enabled.

I have a reflow station, but not the experience. I will probably take it to a local shop who does and see what happens. The header itself is only between $2-$5 new and might be worth the hassle just to try.

Getting the header would open up lots of new potential avenues for playing around, but adding wifi would be top of the list. Especially if I can add a full form factor laptop card (I'd have to externally mount the ant wires from the case).

Thanks for the advice, folks! I'll post once I get further in the project

I wouldn't worry about U2, that looks like an unpopulated NOR flash to me. Maybe an alternate package option for U5. The parts required for the mini PCIe header seem to be in place, e.g. the DC blocking caps for PCIe RX/TX (C232,C235,C239,C240).

I have a reflow station, but not the experience. I will probably take it to a local shop who does and see what happens.

Yes, that's a good plan. This is not something you casually do and get right on the first try.

(I'd have to externally mount the ant wires from the case).

When you search for "wifi pigtails" (the cable to connect the tiny connector on the card to the antenna), make sure you get one with a IPEX/U.FL connector, as the ones with the IPEX/MHF4 connector are for the newer wifi cards with M.2 connector (the successor to mini pcie connector). Those are smaller and won't fit.

Also make sure that the RP-SMA end of the pigtail (the part you connect to the antenna) is actually compatible with the antennas you buy. It can either have a spike or a hole in the middle, if both the pigtail and the antenna have a spike (or both have a hole) it won't work. Don't just search for "RP-SMA" and assume it's OK, always check the images.

I think the case has a ton of space to just drill the antenna holes on a side and install the pigtail's antenna connector and nut through that hole. Which is how it's actually done in many devices that do have antennas at the factory.

I ran into RP-SMA vs SMA when I connected my PepWave up.. Ah, learning connectors that are different just to different

Also, when asking around a specifically electronics forum, they agree with @reka that it looks to be a flash chip, although with an odd footprint. (https://lcsc.com/product-detail/FLASH_XTX-PN27G02BBGITG_C558836.html)

I wonder if it could ALSO be populated, if I'm going thru all the trouble with the flipside.. Hmmm