Add static route to other gateway on network (iptables or ebtables professional needed!)

This question is not specific openWRT but since the openWRT community has an answer to all networking related questions and very willing to help people I ask it here anyway.

This question has been modified to express better the network situation and the findings thus far how to accomplish things.

Every physical location has their own gateway obviously to connect to the internet:

Example of the network on a map: 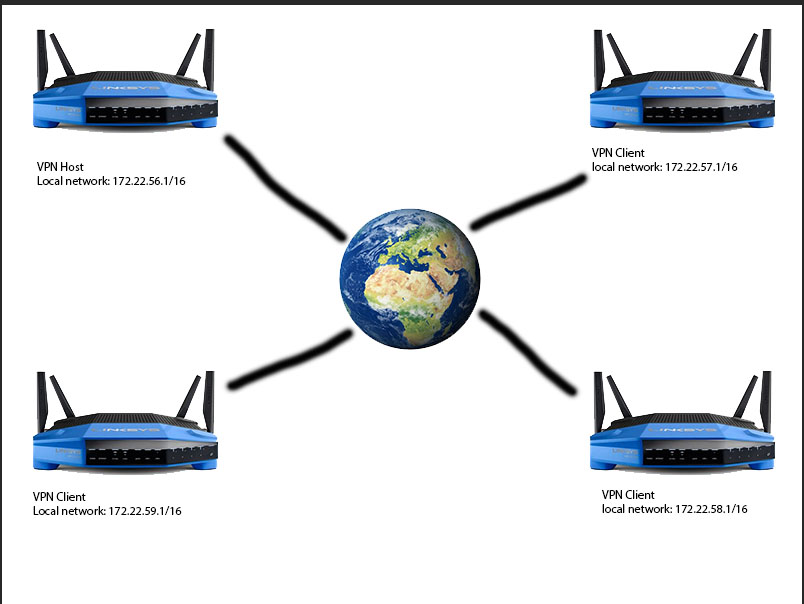 The whole network as you can see is a class B network. So every physical location is using their own internet connection for any connection out of the 172.22.0.0/16 but inside they can all connect with each other, UPnP is working, DHCP working, network neighborhood, sharing, etc. all is working.

Practically because on each device eth0 is bridged with wlan0 and tap0 everyone can communicate with everyone else inside the network as well as the internet while the internet itself of course can't access anyone inside the layer 2 network.

Now for 1 specific internet address, assume that's 47.89.88.80 I however want the packets not to be send out using the gateway of each specific physical location but wherever you are, you should use gw1 always.

In windows I simply do this:

This works perfect. No problems!

But I'd have to do this on all computers and other clients everywhere on the network. So I also want this to work for smart phones, tablets, laptops, Linux, OS X, Windows..

As you can imagine, configuring every single device on all physical locations is a daunting task, if possible! Some clients like iOS where Apple claims customers have no rights over how to use their devices and only apple has the right over how customers use their devices I can imagine setting such routing in the device isn't even possible on a non-jailbroken iOS device.

So the solution lies in simply changing how the packets are routed in the openWRT routers so it applies for all clients that send the packets to their corresponding local gateways, catch these packets for the specific target and resend them back into the bridged network to gw1.

Well I thought simply, but obviously can't get it to work.

Is there a way, I can configure the firewall in openWRT, assume the router with 172.22.58.1, my best bet is iptables or ebtables are needed, to catch these incoming packets on the physical device eth0, if they have the target destination 47.89.88.80/32 they must be send back but with the gateway 172.22.56.1? And also of course the rule that the answering packet goes to the proper client where the original packet came from.

at the router, all the packets from the router itself are correctly not being send to it's own gateway 172.22.58.1 to reach the internet location but using the gateway of 172.22.56.1 of the other router over the tap interface. So that works splendid, but only for packets send from itself!

But all the packets from the bridge interface, eth0, wlan0, wlan1 I receive this message:

So obviously these packets aren't send properly over the bridged tap0 interface to the other gateway.

Is this possible in openWRT and if so, example how to configure the firewall, iptables, ebtables how to do this in openWRT

Thank you in advance for explaining this how to do it, if possible.

If there's a key relationship between each router, you may have to use the option onlink.

thank you for your answer. Unfortunately it doesn't seem to work.
"All you have to do it setup your fiewall to ALLOW traffic between these Zones"

Since adding this rule in the windows routing table works, I assume that means traffic between zones is guaranteed..

I simply bridged VPN with the LAN

Since adding this rule in the windows routing table works, I assume that means traffic between zones is guaranteed..

Not unless your Windows machine is a router. I'm referring to a firewall rule in the OpenWrt router.

Do you have VPN software on your Windows computers - or on the OpenWrt router!?!?

so bridging the tap1 with the eth0 (lan) isn't enough?

the problem with the /32 switch is that luci keeps removing it if I refresh using luci interface so my assumption was the /32 can leave that one out.
Luci says to the netmask: "if target is a network" so if not, if single host, it defaults in the GUI to 255.255.255.255 and in the /etc/config/network the /32 is then removed.

the vpn is on the router, sorry for not pointing that out. Everything should be done on the router so it's the same for all clients without digging into windows.

well I can't seem to get it to work.

First reply is without routing set

so the router wires the signal to the modem(which is also a build in router) - so a router behind router.

This is a traceroute using the static route for that IP:

So from the router indeed the packets go over the VPN to the other router, so that's working.

One can also clearly see the * * * are here locally in the country as in Europe using the European gateway the results are actually returning icmp packets where here locally they drop them I guess.

now with the above working at least on the router side, my clients behind the router in the LAN I get this:

So obviously the router 172.22.60.1 sets the static routing for itself correct. But the clients behind it (testing this from windows PC) are somewhere blocked I suppose.

I think the problem is the router can't forward back the packets to the incoming interface.

since i bridged the vpn, wlan, lan it's all 1 interface if I'm correct. br-lanbridge exists of tap1, wlan0, wlan1, eth0.1

but now for specific IP targets it should go to the tap1, so basically back into the br-lanbridge

so I guess I have to setup some iptables to catch packets incoming on the eth0.1 and wlan0 and wlan1
and forward them to tap1