I have a wifi router that has a private network (192.168.0.x) and a guest network used for IoT devices and family/friends (192.168.1.x). I have additional wifi access points "Dumb APs" connected around my house by ethernet to to give good wifi coverage to the private network. The router is the only device that has wifi for the guest network but now I'd like to add that to the APs due to wifi coverage issues with some IoT devices. I've looked but I can't figure out how. Can any one give any tips?

Here's a picture showing that I want to add (red line) the guest network on the AP(s). 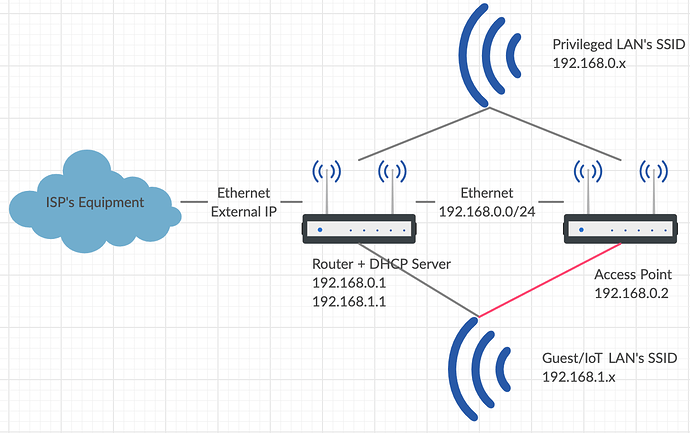 Follow this guide. Do all the steps one more time for the iot.

Thinking about this a bit more, I need the guest network to be accessible over ethernet. Right now all of the switch ports on the router are for the private/trusted network's VLAN. The guest/IoT's network VLAN is only accessible from wifi from the router. I don't want anything on the guest/IoT's network to be able to reach the private/trusted device network that the router and AP(s) currently have.

I did almost exactly what you want. I wrote down what I did here

baslically use vlan tagging to separate the traffic.

At the very bottom there is a rule to block traffic from guest to the lan hosts.
If the router supports vlans, then you can create a guest vlan and an iot vlan to expand the broadcast domain of the guest and iot from the access points to the router. Then the router will be handling all the traffic, serve DHCP and DNS. I don't think we have such guide in the wiki, so you could try @Ramon's tutorial.