Hi,
There is lot of options for k/v
Like time advertisement and Local Zone etc...
How should I configure it correctly?
Sometimes I noticing that it roaming in -75 dbi....
That the way it should work?

Did you get your WiFi tuned to roam properly without these additional techniques?

You mean by lowering Transmit Power?

Yes, but more than that.

And, where possible, adjusting the location of the APs can also be beneficial.

Have you optimized the roaming in the basic scenario?

Yes, I did everything but lowering Tx power..
I need this signal strength..
802.11 k/v should be roaming by talking to the AP near me, isn't?

Second thought, maybe the v/k/r not working due to unsupported chip? Its the ipq807x SNAPSHOT

I don't know if it's only culprit of my devices, or something in the AP configuration makes them not roam, but at least in my case, the roam does not work.
So I'm very interested about what are your findings.

Good question. With original xiaomi firmware I think the roaming was totally fine.. maybe lack of support with ipq807x and OpenWrt..

Yes, that's the problem: I think remember that with original firmware, in repeater mode, the roaming was working fine. But after so much time, I'm not totally sure at this moment.

I just checked now with openwrt, v/k seems to work..
802.11r is not working.
Tried with OnePlus 9 Pro support AX , I doubt my phone not supporting 802.11r .
How can I really test if v/k is working or not without guessing ?

The only real way, is using wireshark or similar. I don't know of other way.

Ok, reverted back to xiaomi stock (to test the roaming). The roaming is working flawlessly... Im not sure what kind of roaming they are using. In the wifi scanner app I have, I see:
[WPA2-PSK-CCMP][RSN-PSK+SAE-CCMP][ESS]

Disappointed with the openwrt roaming

Disappointed with the openwrt roaming

To be clear, OpenWrt doesn't have anything to do with roaming. Unless you are running 802.11r/k/v, the AP actually has literally nothing to do with it, ever, regardless of the firmware on the AP. It is a client side process.

So, if your results with OpenWrt are not as good as the stock firmware, that suggests one of two things:

This is generally a bad idea for roaming. Roaming works best when the channels are different.

Not sure what you mean by this... maybe you can clarify which AP was broadcasting a hidden SSID and if it was the same SSID name as your main network or something else. 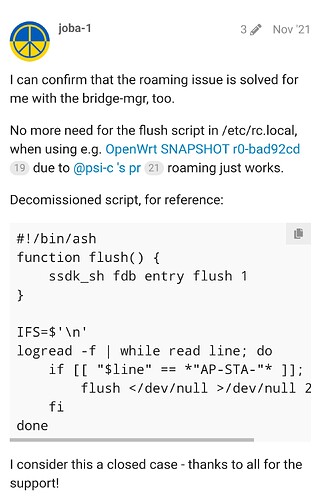 Seems to work well, not noticing any performance issues. Now trying to build a replacement patch matching the kernel .vermagic for others to test.

the patch is not in stable version yet.

Are we talking about the same solution?
Seems like something different..

it is about patch that resolves lack of roaming/FT in versions 21.* and 22.*

I am also experiencing the same issue on AX3600 running Openwrt wherein the client can't connect to the nearby router even when i am sitting right next to the router. this is super odd