2.4 and 5GHz to ethernet bridging

Unfortunately we're stuck with getting our internet via a WiFi network provided by our landlord's contractor. Said contractor is unwilling to give us an ethernet drop instead and so we've had to come up with a rather rogue configuration as follows as we're unable to get broadband installed ourselves: 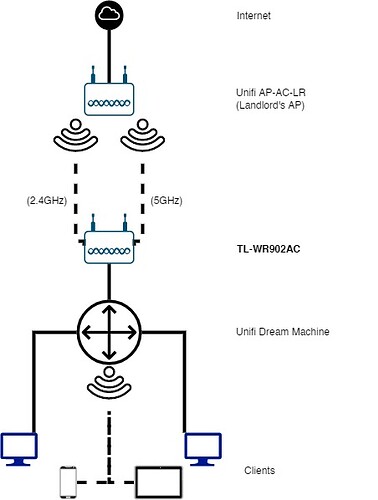 Unfortunately, fairly aggressive traffic management is applied on this network (which we hit in no time due to all of our traffic coming from a single MAC address). To get around this, the MAC has to be randomised. Our UDM has the capability to work with multiple WAN IPs, so I was wondering if there was some way of using the instructions to create WiFi to Ethernet bridges in OpenWRT to create independent 2.4GHz to ethernet and 5GHz to ethernet bridges?

Is there a package available to randomise MAC addresses (e.g. every 15 minutes or so)? I had a look through the packages repo but couldn't see anything. I could do it with cron jobs but would rather avoid relying on something I've programmed.

If you're capped below the max speed of the 2.4GHz, you could cycle between the radios, and randomize the MAC in the process.

Our UDM has the capability to work with multiple WAN IPs

Are you attempting to bridge the wifi to ethernet (i.e. a transparent bridge), or are you routing on your WR902AC such that everything behind it is on a different subnet than what is provided via the building's network?

If you're routing, your UDM is getting an address from the WR902AC which is providing NAT masquerading for your UDM and downstream devices. Therefore, the fact that your UDM can handle multiple IP addresses is not really relevant since it doesn't have a direct connection to the upstream network anyway.

Is there a package available to randomise MAC addresses (e.g. every 15 minutes or so)?

This would only be relevant if you're using the WR902AC in routing mode. If you are aiming for a bridge, the MAC of the WR902AC theoretically doesn't really matter, only the downstream device MACs.

Also, randomly changing the MAC could theoretically be achieved with script, but keep in mind that each time you do this, you will have a break in connectivity which could take few seconds to re-establish. For normal web browsing, that probably won't be too disruptive. But it will be seriously problematic for streaming media, games, video/audio calls, etc.. Some services may be able to reconnect after the upstream network is reconnected, but other things may have to be started again.

FWIW, the WR902AC is a perfectly reasonable travel router, but it is not the type of device I would use to bridge your main home network to an upstream wifi network (unless the upstream network is really slow to begin with).