However, one thing that would be really nice for me is if they can be powered by 125 VCC. According to the datasheet, it would be necessary to use 100-240VAC, but, sometimes, these power sources can deal with DC.

Anyone has one of these switches and could send me a picture of the tag in the power source, where I could see what is the input and output? Thanks!

I also have a 1900-24E and a 1900-24HPv2 with internal power supplies, but both units are mounted in the cabinet and I can't easily take them out. What exactly do you mean with "the tag in the power source"? 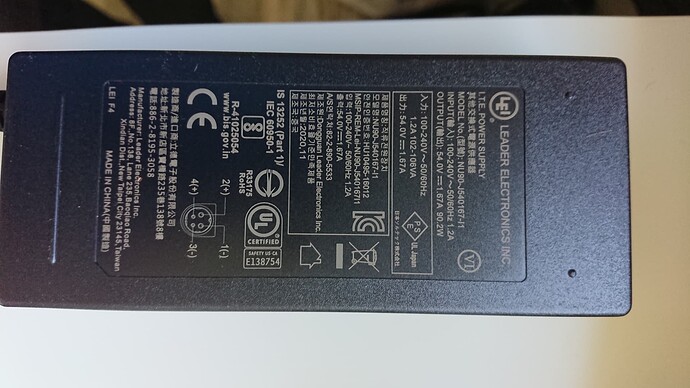 This is the GS1900-10HP power brick. It uses a weird 4 pin round DIN connector for some odd reason.

The -10HPv2 has a barrel-style connector, but I'm not sure if it's already fully supported by OpenWrt.

What exactly do you mean with "the tag in the power source"?

I thought they all had power bricks, I was thinking of what @bmork posted. Thanks!

I see you theoretically need AC power input. I have asked the same question to a Zyxel representative, if they have an alternative I'll come back here to report. Anyway, it seems possible to look for a power source whose input be 125VCC and output be 54VDC 1.67A, with this connector whose name I still will find out. Thank you!

The name was already mentioned by @bmork: It's a 4 pin DIN connector. Or go with the v2 and a standard barrel plug, but check first if it's already supported - there was some discussion on this either in the realtek-thread or on a github PR, I don't remember.