Yet another thread on issues w/ local DNS forwarding

I am using an rpi 4 with Openwrt as a routed wireless access point, as per this tutorial.

Recently, I have altered my DNS settings to running a local Unbound DNS on my OPNSense firewall at internal IP 10.0.0.254. I have 3 devices, where 'n' in the wireless interface address below is either 10, 20, or 30. All other devices i.e. workstations etc within the internal VLAN networks can access the 10.0.0.254 unbound address. There are no ingress or egress rules on my switch ports, they have been removed for testing this problem.

The network is as follows:

I have tried dhcp option 6, DNS forwarding, Port Forwarding on the firewall. Nothing works.

Here are my firewall settings for all devices, is there some kind of issue with port forwarding across networks? I have tried all combinations of network routing, including changing the firewall routing away from the VLAN and forwarding to the 10.0.0.254 interface.

This is my usual firewall routing:

The following post replies show an example of using the 10.0.0.254 interface. In my normal configuration, the "Interfaces" do not change only difference is the firewall route from the wlan0 to vlan40dhcp instead of wlan0 to lan. 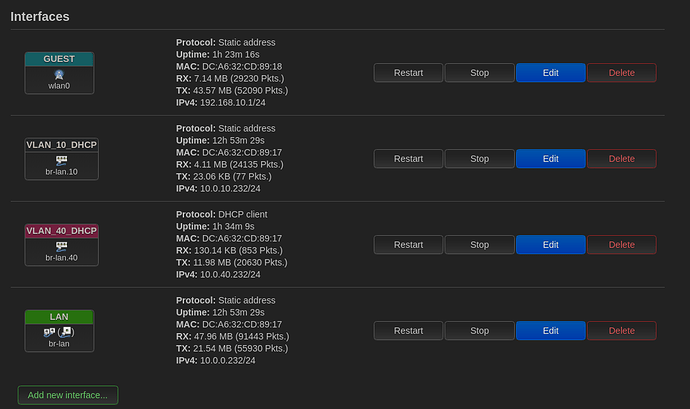 I have now also tried adding custom rules as follows:

Finally, I have tried using custom DNS servers which also does not work. I'm quite confident that I have now tried all possible combinations of solutions to this issue.

NOTE: If I simply set option 6 with 8.8.8.8 then DNS works. However, that is obviously not a solution.

Do you have any hardware doing anything in that arrow because those addresses suggest that they are on two different gateways and that won’t work.

Your pictures doesn’t really say much, you need to past the firewall and network config files.

I recommend at least the systems you have screenshot on but the question is connected to these system config files: wireless, network, dhcp and firewall.

This is all one device. It's a raspberry pi setup as a routed access point. Going from wireless to wired. All of the instructions are in the link to that tutorial. Here it is again

I don't know anything about these config files, so you'll need to be more specific.

The alternative is to setup the pi as a bridged access point which will mean the wireless interface and wired are on the same network. However, this doesn't seem necessary given that 8.8.8.8 is still reachable. I find it highly doubtful that the DNS server needs to be on the same exact network segment for this to work.

Then I still couldn't ping 10.0.0.254 from my mobile device sitting on the wireless interface, this was until I changed my openwrt firewall rules to route from wlan0 to lan which is a 10.0.0.0/24 untagged subnet. However, even with this set I still cannot get DNS resolution from 10.0.0.254 despite being able to ping directly from my mobile device.

It appears my options are as follows:

Go to Network>DHCP and DNS>General Settings and set 10.0.0.254 as an upstream DNS server (this should not be necessary, but better set it up).

Remove all other DNS settings (if any).

Yes. The wireless devices should use 192.168.n.1 as a DNS server. Their DNS requests will be forwarded by the router to 10.0.0.254 and your problem will be solved without additional routing or port forwarding.

Thanks for that! Will this work if I am routing wireless traffic through to VLAN40?

EDIT: the answer is yes, this works now. Will do a write up at some point.