Hi,
i have some strange problem after flashing Breed bootloader and Padavan firmware to my router 3G. I did everything like in tutorials and it works but... Problem came when i lost power in router / try to restart it etc. Basicly if i need to reboot router becouse it won't start (wont boot). As i can notice after power back / reboot Padavan firmware doesn't start automaticly it is like bootloader doesn't work. I can run router in boot mode and access Breed, than no problem breed bootloader works. Now when all the fun comes, to run router with flashed Padavan firmware and make it work (till next reboot) i have to multiple times load breed bootloader via Breed menu for both partition it is not like once or twice I need to try multiple times with automatic reboot and without it than suddenly after one of reboots firmware starts and i can log to Padavan dashboard and router works perfectyl fine of course till another reboot...

Will apperciate any help / suggestions.

There might be some people here that have tried the BREED bootloader, but neither one of those are OpenWrt components.

Padavan is available at https://bitbucket.org/padavan/rt-n56u/src

Searching the forum here looks to have several mentions of BREED 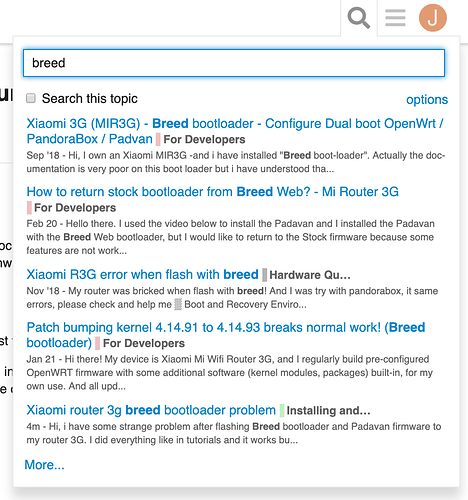