TBH, I don't know whether the MiWifiRepairTool will replace 3rd party bootloader with original Xiaomi firmwares. My understanding is routers with breed bootloader, require custom builds specific to function with breed. I could be wrong.

So it is reasonable to assume standard Xiaomi and stock OpenWrt images won't work with breed bootloader?

To get start up log, I would think you will need a serial-TTL connection to the PCB.

Have you opened up your R4AG with chinese firmware, to confirm whether it is the newer design?

I successfully flashed breed bootloader, still failed to flash the official squashfs-sysupgrade.bin, I am going to checkout openwrt 21.02.2, and build it my self.

I find that xiaomi-4a-gigabit use a new model of flash:EN25QX128
before use GD25Q128C and W25Q128BV according to this commit and this topic page,from the latter page I found GD25Q128C.
maybe that's why my old device can flash in, but the new one cannot.

from this commitfrequency of flash is down to 50Mhz,but from the breed admin page, this flash is 44Mhz.

It seems I have the boot loop, because I can get into the breed console every few seconds, and ping to 192.168.1.1 like this 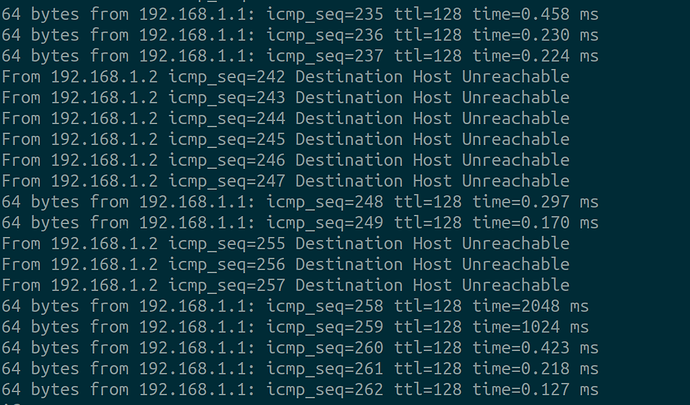 Can I suggest you raise a bug report ?

However, for a patch to be created by another developer, they would need same model of R4AG as your device to investigate.

already issued, I can make sure that it is the image file's problem,maybe caused by xiaomi's new flash, my previous device also xiaomi-4a-giga, I succeed.

fwiw, I have a pair of Global 'Giga's.

Another forum member very recently bought a new 'Gigabit' Global model. OpenWrt installed ok. But it could be older inventory because the UK retailer incorrectly describes it as 100mb 64MB RAM model so perhaps has not sold many.

after using https://github.com/acecilia/OpenWRTInvasion, I telnet the router and cat /proc/mtd, I got

but from the older device openwrt cat

is this the problem?shoud I modify the dts file and recompile it? I'm not clear about the flash process, does command mtd -e OS1 -r write firmware.bin OS1 change the partitions? or it just use the partitions already exists before,and only mkfs and change the file in the specific partition.

There is no problem.

Under root@XiaoQiang:~#, you are in xiaomi factory fw, and

You have to rename the openwrt *-sysupgrade.bin to firmware.bin and put it into /tmp foler. Then,

Assume it has the same functions as EN25QX128A, refer to my post to patch the linux driver:

You have to compare the Specs carefully.

I got the infomation of INFO field from github

Hi @FredyVia - were you able to unbrick your xiaomi with this cFeon chip?

I have a device with the same chip (QX128A-104HIP) also in a bootloop, but I have not been able to recover it after a failed OpenWRT flash attempt...

I was able to recover it using tftp method after a first attempt. But after a second attempt with the latest OpenWrt, it will no longer accept the 3.0.24 xiaome firmware anymore.