Tks very much. I will try to restore bootloader. I have straight cables. Again, tks you.

How can I flash stock to one partition (to flash OpenWRT) and Padavan to another? The goal is to have a dual boot system: 1. Padavan 2. OpenWRT. And how do I select which system will be started?

How can I flash stock to one partition (to flash OpenWRT) and Padavan to another?

And how do I select which system will be started? 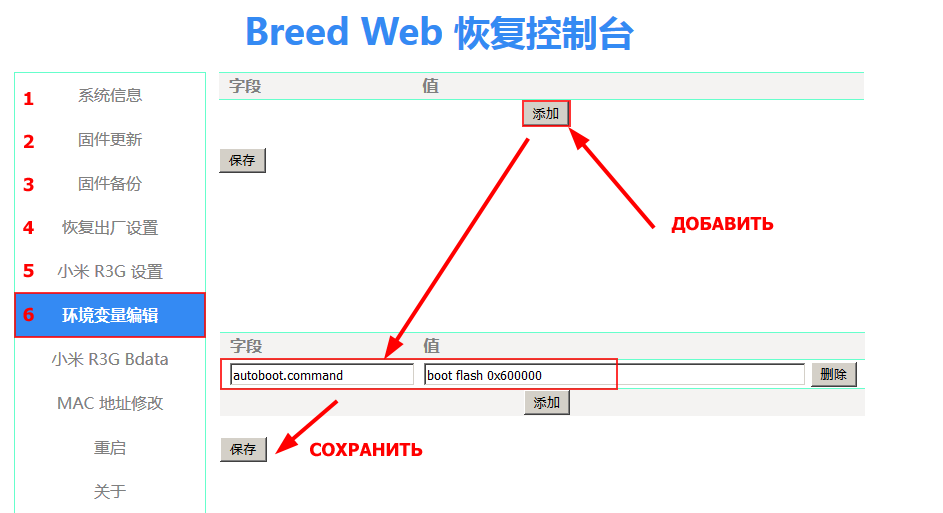 But if you boot to Padavan, you loose stock settings and and vice versa - if you boot into Padavan and reboot to stock, all Padavan settings will be wiped.

Hi, can I know how to install Breed on Mi Wifi 3G?

Did anyone manage to get the stable builds to run on breed? I wasn't able to get it booting and via serial found it stopped after "init done" and then the router would go dead (temp) and had to turn off & back on again, tried to flash a merged kernel1+rootfs0 image from 4pda forums, only for it to result in erasing the default MAC addresses.
Now luckily had a backup of all MTD partitions from OpenWRT before I installed breed so got the bootloader back, but still can't get OpenWRT installed, resulting in the same error. I'd like to restore all the MTD partitions but I thought to ask for a method before trying it and maybe corrupting the u-boot itself.

OR
Get OpenWRT (snapshots?) to work/flash from breed and boot to connect. Then use breed to restore the MAC backups.

Dont use command on openwrt homepage after install breed, it will not work

Did that in past but didn't work. Might've not done properly.
So flash the xiaomi dev on first partition 2 then partition 1 via breed, then boot normally and use mtd right?
I may have found the MAC i had by bdata & config backup i had using hex editor. So maybe that won't be needed to flash & can just set values by breed.

Also what do u mean by command won't work? The UART connection or the SSH? If it won't then what about snapshots cuz they require terminal & "opkg depends" & "opkg whatdepends" type commands won't be able to be used

Restore to stock and upgrade to Openwrt like instruction this page: https://telegra.ph/Xiaomi-Router-3G-proshivka-LEDE-11-23
It work for me.

Got the xiaomi dev ssh firmware to boot but openwrt still has issues.
Here are the logs if interested (i'll look at them later)
Flashing via the steps then rebooting- https://pastebin.com/KE1P04n4
Normal reboot with debug level 4- https://pastebin.com/XDdjqLb1
Stops at "init done" everytime after kmod kernel modules are loaded then the device basically halts. Can get into failsafe mode of openwrt but since my isp is PPPoE, cant use it and inbuilt commands to download and upgrade via it.

Does this also work for xiaomi-r3 (mt7620a device) Router which should be the same hardware than xioami-mi-mini? There is an bootloader for the mini-device on hackpascal's site.

Router which should be the same hardware than xioami-mi-mini?

Thank you very much, I'll try it next week when I am home again. But are you sure I can use the Breed of Mini? - How's the performance of your device with openwrt or padavan? - Actually I thougt about to just extend my wifi of my 7490 with wwan and use the mir3 as a client-bridge through wifi. - It means I hope to solve the 100Mbit/s issue of the wan/lan ports through higher wifi speed. Of course this requires finally a good driver support for MT76x2e under openwrt! - Any experiences with it?

I also thought about this breed: https://breed.hackpascal.net/

Hi @tr4usut, Do you able to fix your dead Lan Port? How do you fix it? am also facing a dead Lan port.
Im on lede/owrt with stock bootloader. Hope anyone can help, Thanks

My suspicion was true, It was a HW related issues in regard to power failure during boot. I may have get a bad power adapter unit or simply the stock power supply just insufficient to power up the router.

So I use another power adapter rated 12v2a (stock 12v1.5a) from my old router, and to my surprise the LAN back alive again. I immediately initiate for Stock Recovery just in case, boot up stock xiaomi firmware and did power cycle the router for like hundred times

For the sake of trying, for now im on Padavan with Breed on bootloader. So far it's really stable I would say, the wifi signal and throughput gain much improvement (Maybe because of a slight powerful adapter?

idk ) Might going to try Overclocked Padavan on this bigger power adapter.

I messed up, instead of installing Breed I ended up following the tutorial and installed the rOOter OS.

So trying to figure out what I did. I ran into SSH and followed the steps

But I could not conclude because I had an error message something like MTD could not be written.

I tried to download the develop firmware, renamed it to Miwifi. bin, put on the USB stick and gave the boot again holding the reset to try to return the stock ROM.
It was just flashing the blue Led, and after a few minutes I took it. When I looked at the WiFi was like ROOter OS yet, but it did not respond more on the IP.

I tried to redo this attempt to return the stock ROM, but have not succeeded the LED gets flashing in blue color, and when I turn it is with the IP 192.168.1.1 but now without SSH, and without web interface.

Any suggestions what I can do to fix my mistake?

Before doing this nonsense, I had set up my PPoE and it keeps working, I had not configured the WiFi so the name continues as ROOter and I do not know what the password is.
However I do not have Web Access on IP 192.168.1.1, nor via SSH using Putty

Any suggestions what I can do to fix my mistake?

Check with the support channels for ROOter and Breed, neither of which are supported by OpenWrt itself.

I ended up screwing up and installing rOOter, do you know how I can do to revert and install Breed?

I managed to retrieve the Web access and SSH, entering the recovery mode of OpenWRT