I tried to restore to linksys factory from DDWRT, and in process seems got it bricked.
Not able to get to marvel prompt to restore firmware or fix issue.

at this router stuck with power LED blinking.

2) Tried to use serial into router, it try to boot and dont go further following

no marwel prompt or anything..

after 100% complete it boot and but same result, after boot it stuck at same point, power LED blink an same message on serial.

Not sure what else I can do.. any help would be greatly appreciated.

Given that you were coming from ddwrt, I’d recommend asking on those forums to get instructions for unbricking and restoring the factory firmware.

no much info on that.. as looking way to restore rotuer to factory assuming this is common bricked state. If can figure out how to proceed from current situation to restore it.

Where did these instructions come from?

followed this youtube video too, but issue is over serial it not give me prompt to input commands, it get stuck before it get to that , please see dump in post initial. I'll try to attach screen video for same to explain.

followed: I know it from ddwrt, but here just trying to recover.
https://forum.dd-wrt.com/phpBB2/viewtopic.php?t=316094&postdays=0&postorder=asc&start=0 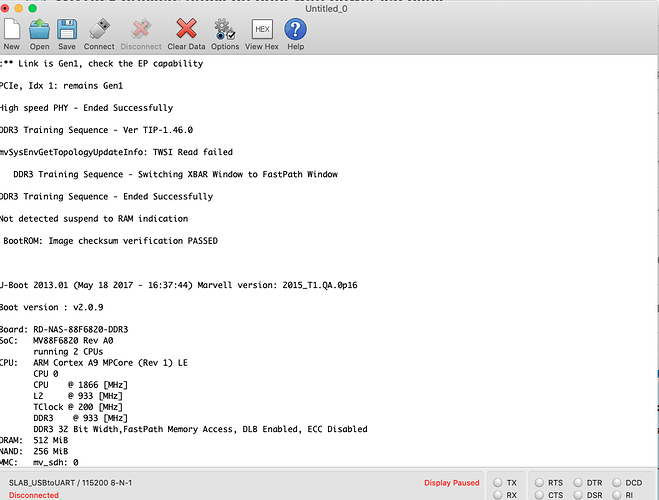 I able to get this far, after this there no prompt or anything..

on boot, it output this straight without any pause to escape or do anything thing.. and after this cant do anything and power led keep blinking .. not sure if there anything can be done at this point...

followed: I know it from ddwrt, but here just trying to recover.

Since you followed directions from the DD-WRT forums, you'll be more likely to find people who would be familiar with that specific method of writing the stock firmware back to the device, what might go wrong, and how to recover from that. In many cases, OpenWrt does not use mtd write commands, so the community here is less likely to know what went wrong in your situation and how to recover... DD-WRT forums are much more likely to be able to solve this particular issue.

understand that to ask ddwrt, but if anyone here know anything on how to recover router irrespective of firmware where it stuck not able to get uboot prompt, please help.

At this point, it is less about the firmware itself and more about the process you used. That process is rather uncommon for OpenWrt, but quite common for DD-WRT. That is why you'll have better luck on the DD-WRT forums than you will here. Obviously if anyone on this forum is able to help, I'm sure they well... I just wouldn't expect many users here to have much experience with the specific process that has caused your router to become bricked.

While the use of mtd CLI is not something recommended for the neophyte it is hardly unfamiliar to the community.

it is hardly unfamiliar to the community.

I'm not saying that the community doesn't know about (or ever use) mtd write... just simply that it is not the daily driver method for OpenWrt in terms of writing firmware or reverting to the vendor's stock firmware. Therefore, the specific situation that has occurred to the OP's unit would likely be a much less common occurrence here than it would be on DD-WRT's site where the method is used very frequently.

So you've said, by my count in 4 posts so far, just not sure how that offers any assistance to the OP involved in the fire fight; pretty sure the obvious occurred to the OP.

If can simply can get to marvell prompt on uboot.
That would be big help, irrespective of what firmware that would be great help.

As read many post saying it in silent boot mode, I tried to press space bar as soon as I see following message on serial terminal:

Then tried to run following just to see if in silent prompt, but no output:

able to get this prompt.. but when type anything in putty it not show masked character. as I tried to run printenv it show this masked line and no response to enter... 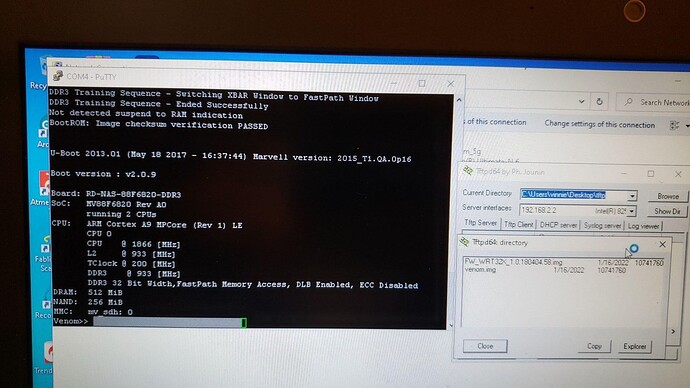 resolved:
Able to finally get prompt

and follow rest of the process to flash firmware,
Note: needed flat firmware file as one directly from linksys not worked as it is..

ok, here something off:

Issue: At this point not able to use router to connect to internet.

Able to ssh into router, any pointer now what to do? kindly help as seems not this running openwrt