Question for WLAN Settings (here Meraki MR18, but I think it’s nearly the same with other Hardware)
When I look at the Hardware capabilities and I try to understand it, there are three physical sender/receiver phy0…phy2. with different power (see below). In other postings I understand that one Wiphy could be for detection of other signals and so on to optimize operation. (Usage of phy0 and phy1 is clear for me, I hope)

In the capabilities all Wiphy’s support same modes. By virtue of power output I think phy2 is for such things. But I have no idea how to config this Wiphy phy2 so that it could work for radar detection and so on.

My first idea was to config two phy2 networks (Band1 & Band2) with mode=monitor. But when I did so, nothing else changed… Is there anybody that could tell me how to config phy2?

You don't configure the detection radio whatsoever. Simply ignore it. It is not intended to be used in the manner you describe.

It is only to be used for what you stated - Radar Detection. Which is a legal requirement in most countries - for employing the upper 5.4 GHz portion of the band.

Also, per the Community Guidelines, please refrain from signing your posts

... Thanks, means that i have to disable this phy2 or should i remove it? 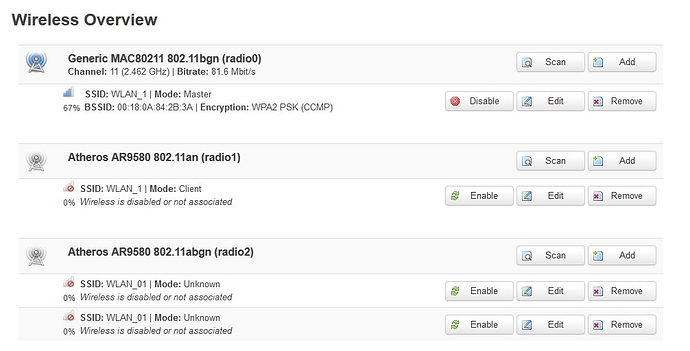 means that i have to disable this phy2?

No. Again, you should:

Simply ignore it. It is not intended to be used in the manner you describe.

DO NOTHING to the DFS radio.

So sorry, i'm stuppid. ... I have already tried some settings. And i did not remember the initial settings. So now it looks like picture above (disabled). I understand that this is ok. (do nothing) Right?

I have already tried some settings. And i did not remember the initial settings.

Just reset to defaults then, simple.

I don't have a device with an exposed DFS radio to test or verify for you.